The Trumpocalypse Files: A Predictable Disaster of a Second Presidential Debate But Much More Favorable Polls; Columbus Day Weekend Recap 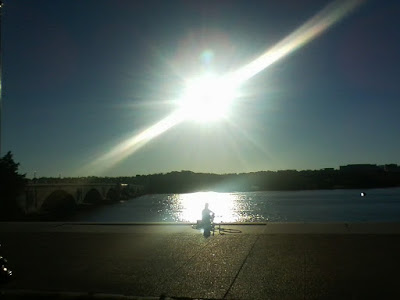 
I composed the bulk of this entry between 230 and 330PM this afternoon, but a vexing issue with Blogger involving the failure of images to upload correctly torpedoed that posting. The issue seems to have resolved itself.
Let me just say here and now, if I couldn't post images on this blog, I would discontinue it and start elsewhere -- either with another Blogger-based blog or with another web log service. 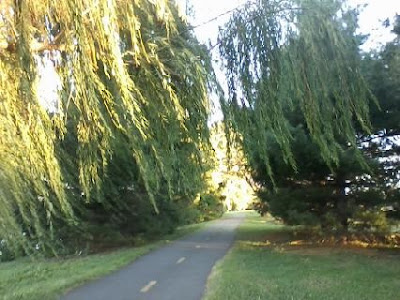 
As for this Monday -- Columbus Day -- I took about a six mile walk and, once agdain, I spent too damn much money, but what's new? I walked to Foggy Bottom, stopping at Circa for a late lunch / early dinner, and then continuing through the GWU District (where I felt like a really old man among all the 19 - 21 year olds) to the Lincoln Memorial, over the Arlington Memorial Bridge, and thence to the Mount Vernon Trail and the 14th Street Bridge (pedestrian walkway on the Geo Mason Memorial span), past the National Mall, and back to my 'hood -- stopping at No. 9 and then Dito's Bar before grocery shopping at Safeway and walking home.
I took a number of pictures on this walk, three of which are posted in this entry. I'll post the remainder of them in one or more subsequent entries this week. 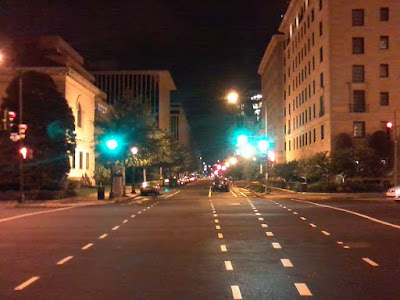 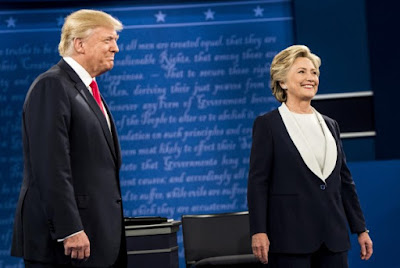 
As expected, that was an ugly, ugly second presidential debate on Sunday night -- epitomized in the exchange in which Donald Trump, puerile authoritarian fascist buffoon promised to lock up Hillary in jail if he wins. She didn't take the bait and the good news is that the media coverage is searing in its negativity on Trump. 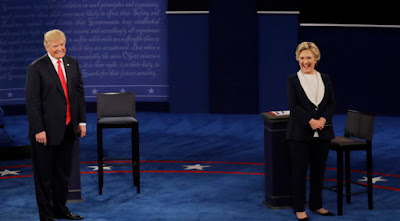 More importantly, Hillary is up substantially in the polls, and the Republican Party establishment is basically in a state of crisis about what to do with this madman who is its nominee -- just under one month out from the election (and with early voting already underway in places). 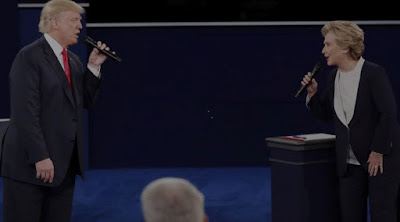 The Madame standing up to this ridiculous buffoon.
*******


The "debate" was disgusting with Trump spewing bile and lies -- as he always does, but this time, in a besieged and cornered way, making him especially dangerous. As a real touch of class, Trump pulled a stunt in which three of Bill Clinton's long-ago sexual harassment accusers (Paula Jones, anyone??) were placed in the front row of a larger audience that consisted, ridiculously, of 40 "undecided" voters. The debate organizers, though, put their foot down about having the three in the Trump family box.
Some headlines of the past few days: 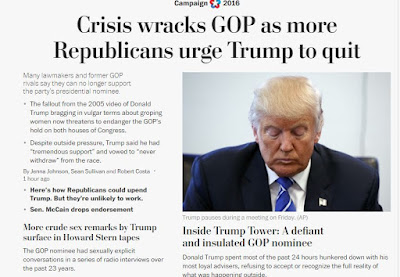 Washington Post online headline on Saturday night, 10:54PM October 8, 2016.
This is as a result of the tapes of Trump's lewd and crude banter with Billy Bush from 2005 surfacing about how he like to grab women by the pussy and force himself on them -- and that he can do that because of his celebrity status.
******* 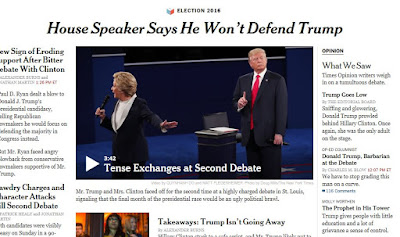 New York Times online headline, October 10, 2016.
The issue now is whether and what other vulgar things -- of a sexual or even racist -- nature that Trump might have said during all the many tapings of The Apprentice.
*******


Here are the aggregated results of some recent polls: 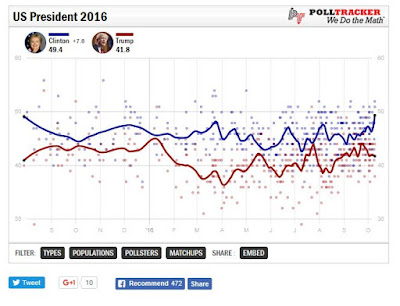 TPM poll tracker since August 2015 through Oct. 10, 2016.
This poll is a straightforward average of a certain set of polls (excluding, I believe, that USC/L.A. Times one that always shows big Trump leads).
*******


From the much more methodologically rigorous and "conservative" FiveThirtyEight site: 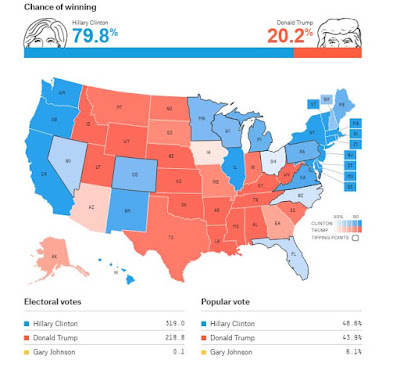 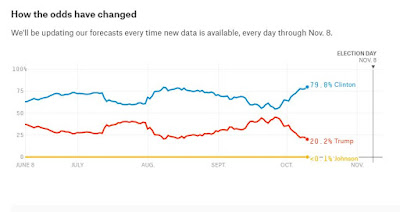 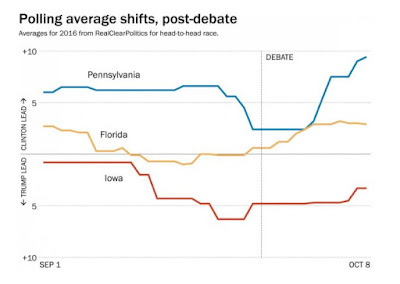 The shift in the state polling averages in Pennsylvania, Iowa, and Florida following the first presidential debate on Sept. 26th through Oct. 8th, 2016.
*******


I watched part of the debate from No. 9, although honestly by that point, I had been out for about six hours and had at least as many drinks, and ended up just walking home. 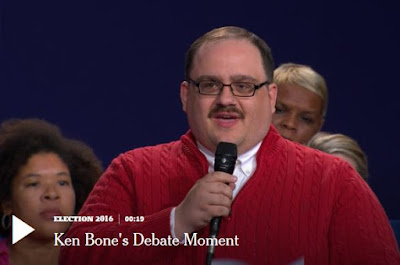 
In the meantime, we're supposed to get all tingly all over about Ken Bone -- a rotund milquetoast nebbish -- and how he brings us all together as proud Americans who see our common bonds instead of our differences. 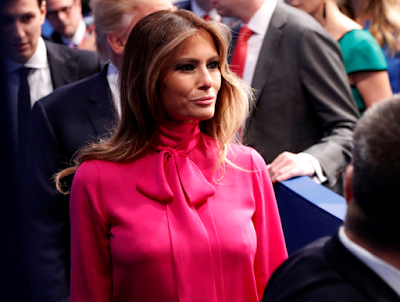 
Oh, and -- while wearing his $1,100 hot pink pussy-bow, I mean, red grandpa's Christmas sweater -- because he is such honest and thoughtful man, he STILL can't make up his mind between Coca-Cola vs. Pepsi Coca-Cola versus sewer water, I mean, Clinton versus Trump. To me, this indicates that he is either the lowest of low information voters or just trolling everybody.
Well, at least he isn't an overt rightwing jackass like "Joe the Plumber" was. (God, I hate this country's need for stupid third grade narratives.) 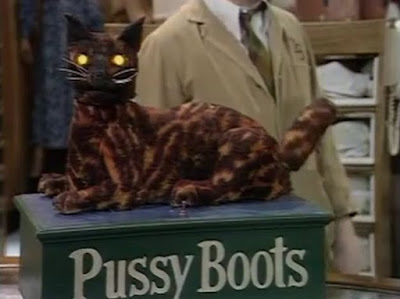 As for "Mr. Bone," that was the joke name for Cary Grant's paleontologist character Dr. David Huxley in the movie Bringing Up Baby, and until I heard it in conjunction with the Sunday night debate, I didn't realize it was an actual name. 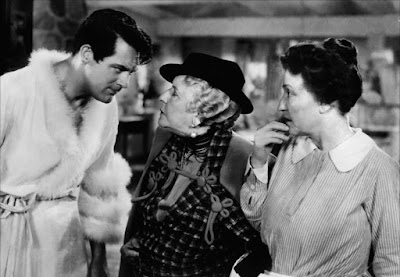 Cary Grant in that marabou-trimmed négligée scene in Bringing Up Baby during which he makes that famous and possibly ad-libbed remark.
OK, enough of that.


As for this Columbus Day holiday weekend, it went by quickly and with little achievement on my part but lots of spending money -- in other words, the usual. I did make it to the gym on Saturday. On Sunday, I had a nice lunch with Quill in Bethesda at Café Deluxe. 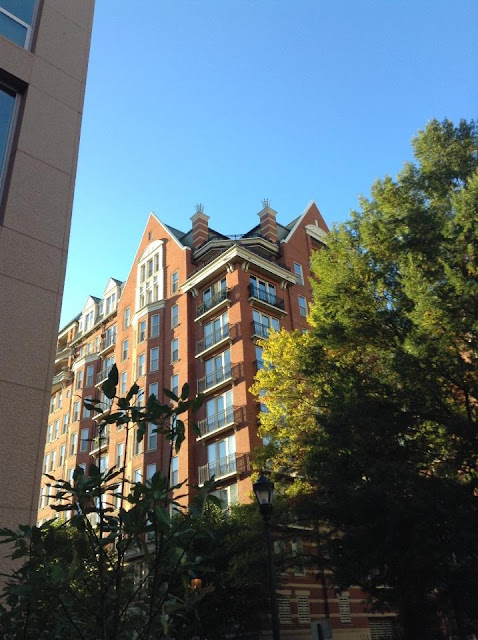 
The weather was lovely on Sunday with cool fall-like sunshine, temperatures in the upper 60s F, dew points around 45F, and a gusty northwesterly breeze behind a frontal passage and with the exiting of post-tropical cyclone Matthew. Today's (Monday's) weather was similar, although not as breeze. It reached 66F at KDCA and 65F at both KBWI and KIAD.
We could use some additional rain but that isn't forthcoming for one to two weeks. 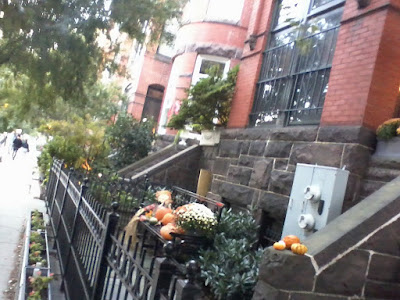 
There was actually a bit more rain in the wee hours of Sunday as the precipitation shield from Hurricane Matthew got just up to the D.C. area and no farther -- another 0.09" fell, brining the storm total to a paltry 0.34", as opposed to places in the Carolinas that had 12+ inches of rain. 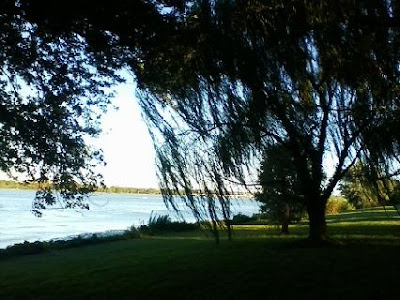 
Update before posting -- I didn't complete this entry until nighttime after my Monday holiday, during which I did precious little of anything except take a walk, eat, and drink (see top of entry).
Tomorrow night is a gym night, unless I get sick or something. I'll try to update the blog tomorrow, but bearing in mind that I can't stay up until o-dark-thirty doing it owing to my being on detail for the time being.
I can't wait until this goddamn election is cover -- and with that, I'm now going to sleep.
--Regulus
Posted by Regulus at 12:43 AM