Home at this midnight hour. I had a good gym workout following a decent day at work. I was again onsite at DOE, where I am likely to remain for another month (or two).

While I must go to bed, I feel compelled to post updates on both the presidential campaign and weather update -- which is to say, updates on Dangerous Political Cyclone Donald Trump and "Life-Threatening" Hurricane Matthew, respectively (the latter being the National Hurricane Center's terminology). 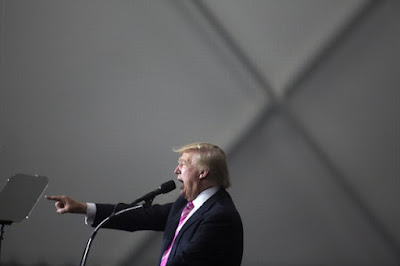 I'll keep the Donald Trump update -- a.k.a., the Trumpocalypse Watch -- to a minimum and just direct your attention to this E.J. Dionne piece in the WaPo (link embedded): Trump's last tweet?
To his point (made often by Paul Krugman) about the media treating Donald Trump like a "normal" Republican candidate, this is something I fully expected to happen. That is, aside from the denial by the GOP establishment and larger GOP media/entertainment bubble of the in-your-face reality that they have an unstable, bombastic, pathologically lying buffoon who would seriously endanger the country for the sake of their desperate need for power ...

... I knew full well that the political media -- including the cable and network news outfits (CNN, ABC, CBS, and NBC) -- would apply BOTH their conventional false equivalence formulas and their "Clinton Rules" to try to make Trump acceptable while "abnormalizing" Hillary Clinton. 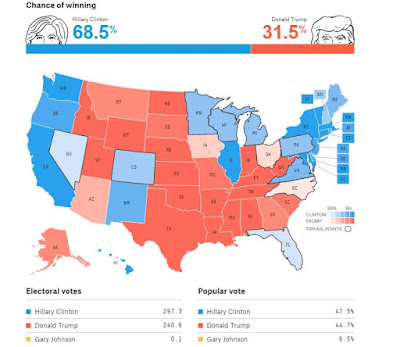 
I would also like to note the current FiveThirtyEight polls plus forecast odds have HRC at 68.5 percent to Trump's 31.5 percent, so she is up a full 16 percentage points from her low right before the first debate.
Of note, Ohio seems to be trending "red" -- for Trump -- even as nationally, the trend is "blue" -- for Hillary. It might be the case that Ohio is no longer that friggin' Center of the American Presidential Campaign Universe. 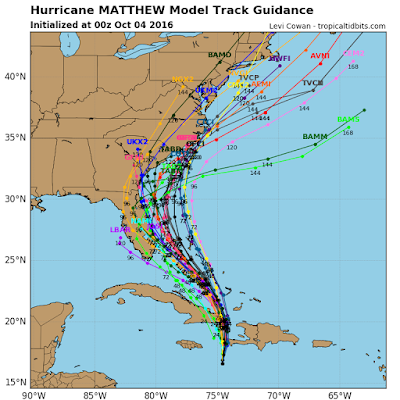 Hurricane Matthew track guidance initialized at 0Z October 4, 2016.
This shows the forecasted track of Hurricane Matthew by a number of model ensembles. (The UK Met model run took the center directly over D.C.)
*******


As for Hurricane Matthew, the trend today -- Monday -- among virtually all the models and ensembles was to bring the tropical cyclone closer to the U.S. East Coast, with the eyewall literally brushing the Florida Atlantic coast and then northeastward over the North Carolina Outer Banks and thence to the Virginia capes before crossing back out over the ocean.
This track would bring rain and wind even here in the Metro D.C. area -- enhanced by the fact that it would be interacting with a passing short wave (frontal boundary).


I will have a lot more to say on Hurricane Matthew, which tonight is bearing down on Haiti, where disastrous flooding and mudslides and a large number of casualties are likely, in the coming days. As of 11PM, the hurricane is centered at 16.9N, 74.6W (190 miles SW of Port au Prince) has top sustained winds of 145MPH and a central pressure of 934mb (27.58" Hg). It is moved to the north at 7MPH.
The 0Z 10/4/2016 operational GFS run shows the hurricane nearly making landfall around Cape Canaveral / Daytona Beach (the eye-wall just brushing the shore) and then curving to the northeast before making landfall around Charleston only to reemerge over the Atlantic near Norfolk. It keeps the central pressure during this entire time between 983mb and 988mb (29.03" to 29.18" Hg).
The images that follow are from that run. Remember it is only one run. 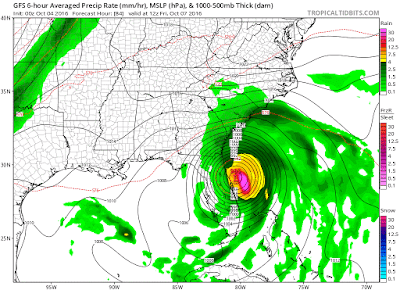 The 0Z 10/04/2016 operational GFS showing MSLP, 6-hr averaged precipitation (in mm/hr) and mean 500-1000 thicknesses at hour 144, valid 0Z October 9, 2016 focused on the southeastern quadrant of the U.S.
This is just as Matthew is grazing the Florida coastline abeam of Daytona Beach. This image is the prettied up and more detailed picture of the GFS output from the Tropical Tidbits sight focused just on the southeastern CONUS quadrant, and features 1000-500mb thicknesses in dekameters (dam) and the precipitation is a six-hour averaged one based on mm/hr.
******* 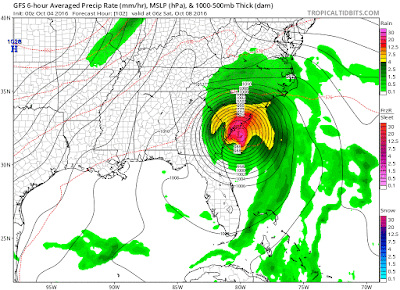 
Here is the regular GFS output image -- from the NCEP website -- at the time Matthew is closest to the D.C. area. 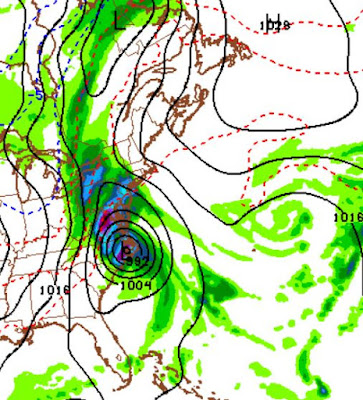 
The hurricane at the same time but in the Tropical Tidbits version: 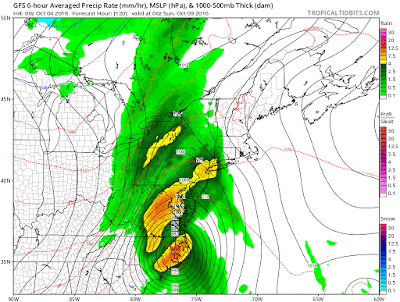 The 0Z 10/04/2016 operational GFS showing MSLP, 6-hr averaged precipitation (in mm/hr) and mean 500-1000 thicknesses (in dam) at hour 120, valid 0Z October 9, 2016 focused on the northeastern quadrant of the U.S.
The tropical cyclone appears to be interacting with a shortwave (frontal boundary) crossing the Eastern Seaboard at that time.
Rainfall totals over a widespread area (including here in the D.C. area) are many, many inches.


OK, that's all for now. Tomorrow night is a non-gym night. Andrea and I are supposed to meet after work -- I'm thinking either the Bottom Line or Black Rooster. (My intention is to avoid the vice presidential debate.) I'll try to post an entry tomorrow night.
--Regulus