Above: Bill Maher on his "New Rule" segment of his most recent Real Time has a (Ken) Bone to pick with America's idiotic, low-information "Undecided Voters" -- a country where fully 40 percent of its people would / will vote for frickin' Donald Trump.
I can't do it justice with any excerpts, so just please watch it.
******* 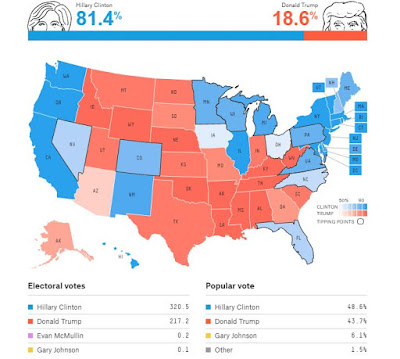 FiveThirtyEight.com Hillary Clinton and Donald Trump odds of winning electoral map (shaded) in the current polls plus forecast model, October 15, 2016.
Hillary continues to hold a substantial lead in the polls over a Narcissistic and Probably Sociopathic Orange Vulgarian and Buffoon (even though she really hasn't -- and likely won't -- break the 50 percent mark). Above and below is the current polls plus forecast output -- electoral college map and trend line -- from FiveThirtyEight.com. The next and final presidential "debate" is this coming Wednesday.
******* 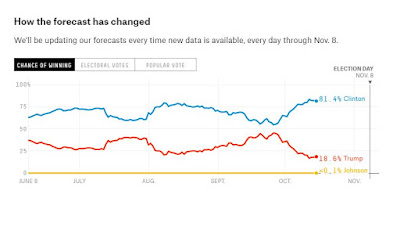 
Before too much time passes, I'd like to note -- with some excerpts -- a really amazing op-ed by a George F. Will, a man I have long despised for his politics and thesaurus-speak masquerading as powerful intellect, with particular ire for his Know-Nothing climate change denialism.
But in the case of Donald Trump, I find myself in amazing agreement with this man, George F. Will. 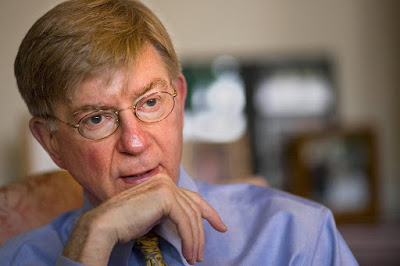 So without further ago, here is his Tuesday, Oct. 11th Washington Post op-ed (link embedded): Donald Trump is the GOP's Chemotherapy.
Opening paragraph:
"What did Donald Trump have left to lose Sunday night? His dignity? Please. His campaign's theme? His Cleveland convention was a mini-Nuremberg rally for Republicans whose three-word recipe for making America great again was the shriek "Lock her up!" This presaged his banana-republican vow to imprison his opponent."
And this:


"Consider Mike Pence, a favorite of what Republicans devoutly praise as America's "faith community." Some of its representatives, their crucifixes glittering in the television lights, are still earnestly explaining the urgency of giving to Trump, who agreed that his daughter is "a piece of ass," the task of improving America’s coarsened culture."
"Because Pence looks relatively presidential when standing next to Trump -- talk about defining adequacy down -- some Republicans want Trump to slink away, allowing Pence to float to the top of the ticket and represent Republicanism resurrected. This idea ignores a pertinent point: Pence is standing next to Trump."
He then ends with four reasons why he wants Trump to remain atop the ticket. This is worth quoting in full:
"Today, however, Trump should stay atop the ticket, for four reasons. First, he will give the nation the pleasure of seeing him join the one cohort, of the many cohorts he disdains, that he most despises -- "losers." Second, by continuing to campaign in the spirit of St. Louis, he can remind the nation of the useful axiom that there is no such thing as rock bottom. Third, by persevering through Nov. 8 he can simplify the GOP's quadrennial exercise of writing its post-campaign autopsy, which this year can be published Nov. 9 in one sentence: "Perhaps it is imprudent to nominate a venomous charlatan." Fourth, Trump is the GOP's chemotherapy, a nauseating but, if carried through to completion, perhaps a curative experience."
Wild and crazy times. 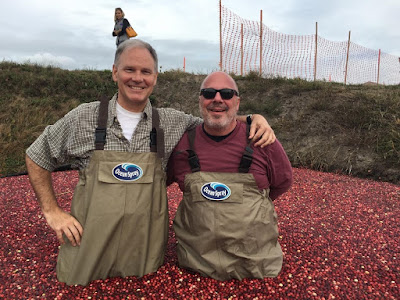 My friend and neighbor Fred in a cranberry bog with his friend at the Cranberry Harvest Festival in Wareham, Mass., October 8, 2016.
*******


As the briefest of updates, last night, I met my neighbor Fred -- pictured above and below in two photos he sent to me -- at Annie's after work, and then I went to Dito's Bar.
Today -- after getting up at damn near 3PM -- I had a good multi-part gym workout today and just finished my laundry. For tonight, I'm doing my usual routine ending at Old Ebbitt Grill Old Bar, where I might be meeting up with Kevin and a friend of his. For tomorrow, I might be going to a picnic at Great Falls (on the Virginia side) with Andrea's group.
The weather continues to feature nothing but sunshine during the day with warming temps -- highs are forecasted to reach about 83F by Tuesday and Wednesday. The next chance of any rainfall is next weekend. 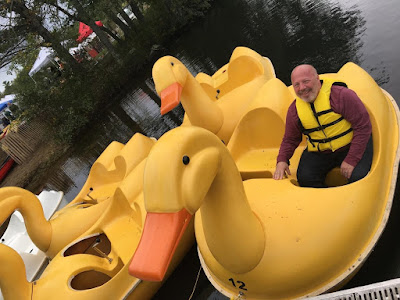 
OK, that's all for now. My next planned entry will be late Monday night. Jukebox Saturday Night entry to follow shortly ...
--Regulus