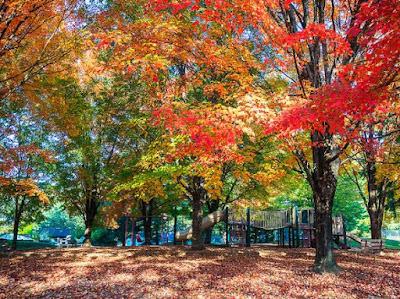 A playground in the fall, Quince Orchard area, Gaithersburg, Md., Oct. 19, 2016; Photo by Flickr user Xavier Ascanio and posted on the CWG photo pool site.
Despite this image, the fall colors this year have been mostly muted due to the dry weather.
*******


Just a quick morning update if only to post a new lead image.
I was busy at work yesterday and then last night, I met Kevin -- in a part of D.C. well away from the annual straight millennial safari to the "gayborhood" to watch the idiocy of the annual "high heel race" that is (no pun intended) run by the 17th Street D.C. gay mafia and its caporegime, Oooza the Unloved Crow Creature, a.k.a., our "Local Hero."
I'm sure the consigliere, M. WADE Tipamillyun, was also there to collect the night's winnings. 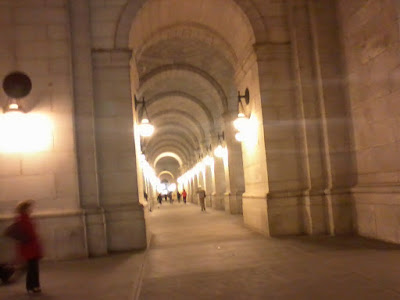 
Kevin and I were going to go to Fado, but it was closed for a special event, so we met instead at Dubliner, a place I had not been since late 2003. It was nice at first -- and the beer and beef stew I had quite good -- but then got inexplicably mobbed with a very Capitol Hill-type crowd.
We went next door to Irish Times, where I think I might have gone back in the late 1990s -- back when I was friends with Wall-P when he was just a budding corporate attorney at the nearby Georgetown Law School (which is located well removed from the main Georgetown campus in a once-very-shitty but now merely "transitional"/dicey section of D.C.).
We then walked up Massachusetts Avenue and stopped at Sixth Engine, where I had never been but that Kevin said was his local hangout a few years ago. (That area is so different than it used to be.)
All in all, it was a pleasant night, though I drank and spent too much.
I walked all the way back home near 16th and U St. NW by about 11:30AM.
Tonight is another non-gym night. I might be meeting up with Andrea. Also, I need to get the passport I found in the wee hours of Oct. 16th back to its rightful owner -- a guy named Zachary. We are supposed to do that this evening.
Tomorrow night is a gym night.
As for the election, it's just 13 agonizing days away. There has been a slight trend downward in the Madame's chances in the FiveThirtyEight poll -- especially compared to the Upshot and Huffington Post ones -- but it is still over 80 percent in all three of its iterations versus the madman Donald J. Trump.
OK, that's all for now. Next entry will likely be late tomorrow night.
--Regulus
Posted by Regulus at 10:08 AM