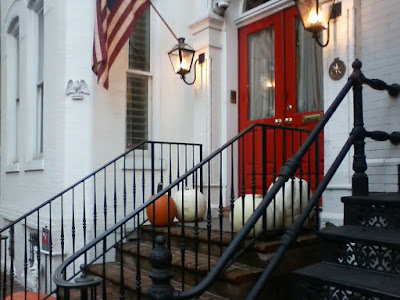 Pumpkins on the stoop of 3044 N Street NW (Georgetown), Washington, D.C., 6:32PM Oct. 2, 2016.
The non-weather-related pictures in this entry were taken on Sunday on my relatively short walk from Rosslyn (Arlington) back to Dupont Circle via Georgetown. Not sure I get the white pumpkin thing. That's as un-fall-like as I can think.
*******


Well, I had intended a single entry but I ended up separating out the political-themed commentary in my previous entry from this general and weather update. I'd like to reverse that order, though, and discuss I'd like to discuss Hurricane Matthew, now a major (category 4) hurricane in the Caribbean, in some detail.


Concerning Hurricane Matthew, the 11PM NHC advisory pinpoints its center at at 14.7N, 75.0W or 325 miles SW of Port Au Prince, Haiti. It's motion is northward at 5MPH. Maximum sustained winds are 145MPH and its central pressure is 943mb or 27.85 inches Hg.


As for Hurricane Matthew's projected path, I think this entry by CWG contributor Brian McNoldy gives a good overview (link embedded):
Dangerous Hurricane Matthew closes in on Jamaica, Haiti and Cuba; still watching possible U.S. East Coast impacts.
Hurricane Matthew is likely to cause the familiar disastrous flooding and mudslides with mass casualties on Hispaniola, in particular, in Haiti. 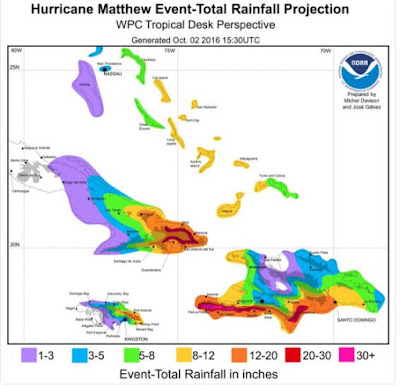 NOAA WPC Tropical Desk's Hurricane Matthew total rainfall projections for portions of the Greater Antilles including Hispaniola, Jamaica, and eastern Cuba, as well as the Bahamas, issued 1530UTC Oct. 2, 2016.
The red is 20 to 30 inches and the magenta are amounts in excess of 30 inches of rainfall in the south-facing mountainous areas -- which is potentially (likely) catastrophic for people living there.
*******


The tropical cyclone's ultimate track is going to be determined by the strength / position / persistence of any blocking high pressure ridge to its northeast over the Canadian Maritime provinces and into the western North Atlantic Ocean. 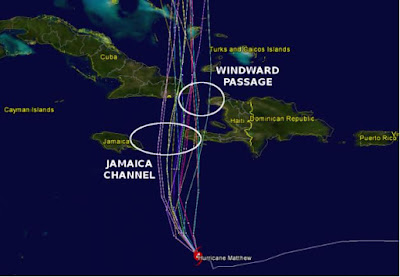 Various (unspecified) models' forecasted track of Hurricane Matthew through the Jamaica Channel and Windward Passage over the next few days.
*******


The stronger / closer / more persistent is that ridge to the storm, the closer it will hug the U.S. East Coast -- and potentially be captured by a passing shortwave that hooks it, Sandy-style, back into the coast somewhere between the mid-Atlantic and New England while morphing it into a hybrid system before it is fully absorbed as an expansive extratropical low. 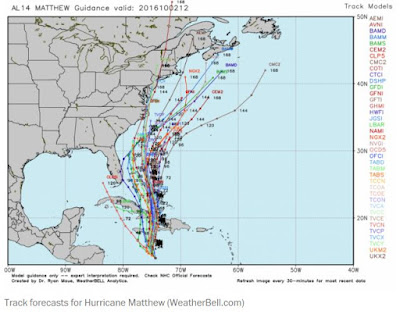 Various 12Z 10/2/2016 model ensembles track guidance for Hurricane Matthew as put together by WeatherBell.com.
These ensembles -- based upon the legend -- appear to include the GFS ensembles as well as the UK Met ones, although I'm not actually sure. There are so many ensembles with different designations.
*******


By contrast, the weaker / farther away / less persistent is that ridge, the more quickly the tropical cyclone recurves out to sea, potentially still causing trouble for the Bahamas. In that scenario, the Outer Banks might be grazed but that would be about it and here in the Metro D.C. area, there would be no effects -- or, if anything, subsidence and full sunshine. 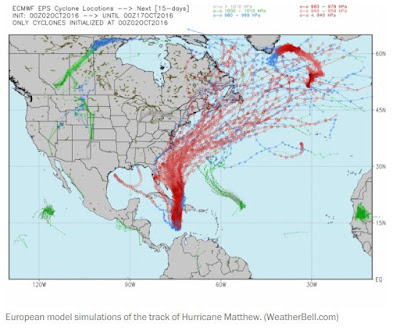 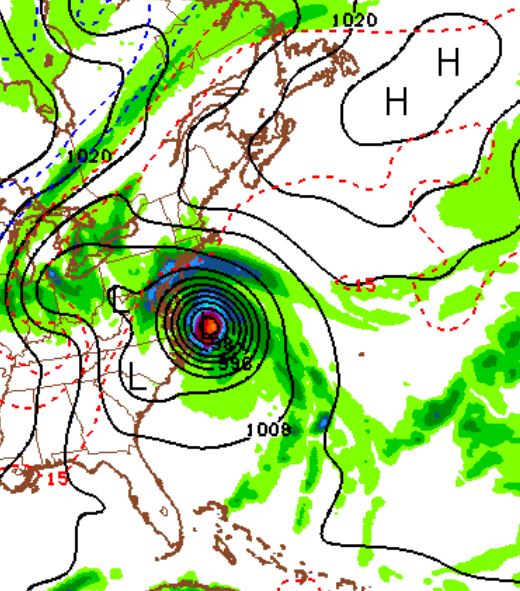 
*By way of explanation, I can see the output of the twice-daily operational ECMWF on this Tropical Tidbits model analysis page, but it is a poor time-step resolution (once every 24 hours). I also really don't have any way of looking at the GFS or ECMWF ensembles, called GEFS and ENS, respectively, in comparable fashion. (I can't really figure out how to use or interpret those two ensemble pages in any useful way. Also, I'm not sure the relationship of the ENS to the EPS (see above).
Below is a somewhat prettied up and more detailed picture from the Tropical Tidbits sight focused just on the northeastern CONUS quadrant, although 850mb temperatures have been replaced with 1000-500mb thicknesses in dekameters (dam) and the precipitation is a six-hour averaged one based on mm/hr: 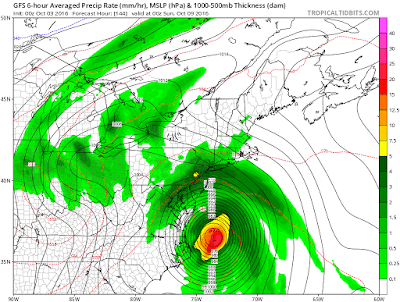 
As a brief update, I didn't really get out of bed until 130PM (again) this Sunday and didn't leave the apartment until 3PM (again). I walked down to Foggy Bottom Metro and took the Metro to Rosslyn, walking back over the Key Bridge into Georgetown. 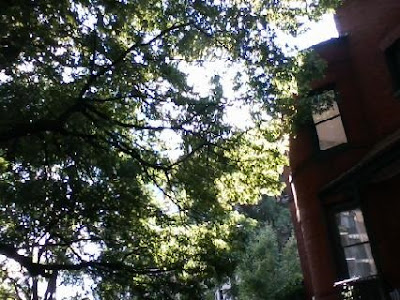 
The weather was partly cloudy -- by sunset, it was mostly sunny -- with highs about 76F and a dew point around 64F, which means it wasn't exactly the most comfortable day. In fact, it was kind of hot in the sunshine. Real fall weather isn't here yet.
But everyone was scintillated that the agony of 3 days of cloudy, showery weather -- that is, very needed rainfall -- had ended. 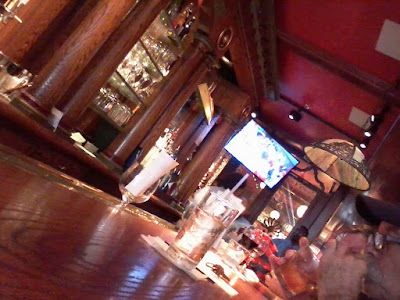 
I walked along mobbed M Street, stopping at Clyde's -- the sister restaurant to Old Ebbitt Grill (same parent company). I sat at the bar and had a very nice dinner (Norwegian salmon salad) and couple drinks (a modified old fashioned and a sherry, or, a port), and some coffee and ice cream.
I then walked back to Dupont at dusk and -- after a brief detour at Trade -- headed home. Fred then invited me over for a Sunday night Manhattan with him and Doug. I was back by 940PM-ish and started updating these blogs.
OK, that's all for now. 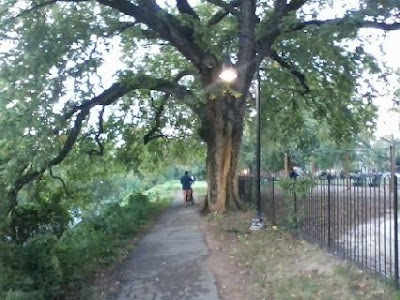 
I am going to bed. I'm very tired and I need to be onsite at DOE HQ tomorrow morning -- indeed, all week and probably for much of the next 1 to 2 months. Tomorrow (Monday) night is a gym night. I'll post an entry thereafter including any new information on the hurricane situation warrants it.
--Regulus
Posted by Regulus at 1:33 AM