Potentially catastrophic Hurricane Matthew is bearing down hard on the Florida Atlantic coastline on a forecasted path that will literally cause it to rake a 150-to-200 mile stretch -- the eyewall itself on the coast, if not the eye itself -- in an unprecedented situation.
The only hope to avoid this is if the eye-wall remains 40 or 50 miles farther offshore than anticipated -- or that the storm crosses the shore at a sharper angle than forecasted. (The former seems more likely.) 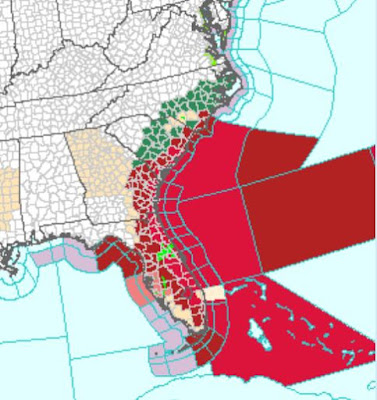 
But my father, in turns out, DID NOT evacuate and instead is ONE of TWO people remaining in that goddamn Flagler-by-the-Sea trailer park. I guess he reasoned that wind gusts up to 120MPH, an 8 foot storm surge, and 20+ foot battering waves are no match for a single-wide fucking trailer about 700 feet removed from the low-tide shoreline.
Deep down, I had a feeling he was going to stay -- and, honestly, I'm not sure I would have evacuated but instead stayed, too, just to test God or fate ... 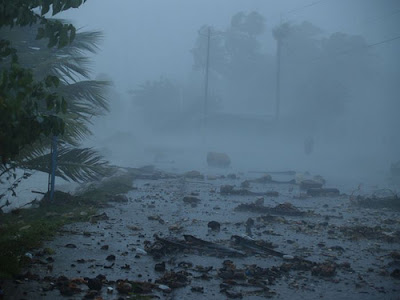 
Of note, the National Hurricane Center website is down -- outright -- as I write this. That is abso-frickin'-lutely unacceptable. However, I was able to find its Twitter feed and based on that information, I can say that the top sustained winds as of 11PM are 130MPH -- down from 140MPH earlier -- and the central barometric pressure is 939mb.
Updated (before posting): The site is back up. The hurricane's maximum sustained winds in the 2AM update are pegged at 120MPH and the central pressure at 938mb (27.70 inches).


Comparing the NWS SE CONUS composite radar mosaic (directly above) to the HRRR model animation (directly below), it appears that Matthew's actual eye is going to reach the coastline about 50 to 100 miles farther north than anticipated -- or, indeed, it may remain just offshore, but that doesn't mean the eye-wall won't brush the coastline.


Oh, by the way, the Rightwing Noise Machine of Perpetual Political Outrage has been sputtering like crazy because of its notion that "another hurricane" is striking right before a presidential election -- and is THEREFORE a secret Democrat(ic) plot to throw the election to Hillary.
Rush the Vulgar Lying Pigboy -- nod to the late, great Bartcap -- and Sludge, er, Drudge have been touting this in various ways all day including in a provocative Drudge headline that caught the attention of the CWG's Jason Samenow, among other meteorologists (including at the inherently conservative Weather Channel). 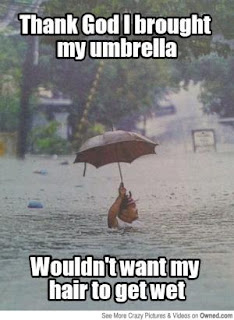 Returning to my dad, I spoke to him earlier -- asking him, "You're playing Russian roulette, and I don't understand it. Could you walk me through what you're thinking?"

He just kind of stammered and said something about those two ridiculous, semi-feral cats that he feeds.

What else am I supposed to do?


Again, I actually full well understand him -- and deep down, I knew he would stay. And while I said that I myself might have stayed, I also realize it is suicidal to remain there in that magnitude of a hurricane that close to the ocean on what is basically a barrier island (with only a few access points to the mainland over the Intracoastal Waterway along that stretch of Florida coastline). 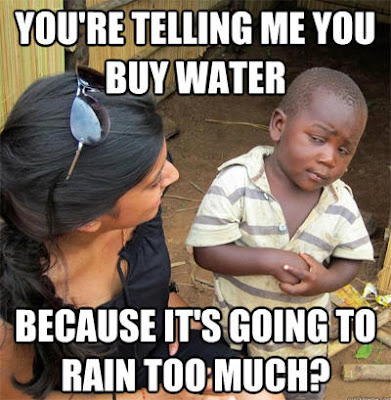 Also, the electricity is going to go out for weeks and the cell phone lines are going to go down for an unspecified period -- so that even if he is OK, I won't hear from him for days or maybe a couple weeks.
Of note, my mom -- his ex-wife from decades ago -- also tried to reach him. While he answered her on Wednesday, he ignored her -- as he does me all the time, unless he wants to talk to me for some reason -- on Thursday. I texted her that he the same narcissist she married all those years ago -- except now he's old and crazy, too.
The Jacksonville NWS briefing on Hurricane Matthew is fairly apocalyptic.


Once the hurricane reaches the Georgia / South Carolina coast, it is forecasted to begin a giant loop that will take it almost back to where it started -- albeit in a much weakened state. The reason for this track is that a passing shortwave fails to pick it up and instead the system begins to get nudged back to the southeast and south by a high pressure ridge building in from the west.


Changing subjects, and as a brief update, I had an OK day. After going to bed way too late last night -- see previous entry -- I got to work onsite at DOE HQ today by 10AM. It was a busy day at work -- in part because I am being pulled in multiple directions, of a sudden very busy, with too much to do. 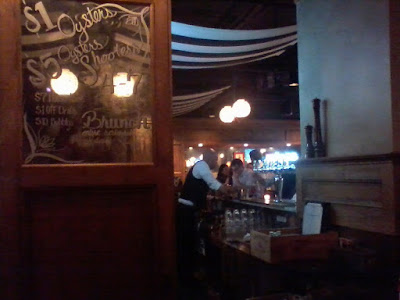 
I left work around quarter to 7PM and (it being a non-gym night), I walked toward home, stopping initially just after 7PM at that Pennsylvania 6 restaurant again -- the first time didn't go so well, but this time, it was fine. I sat at the bar and had a shrimp cocktail and two delicious old fashioned drinks.
I then met Kevin -- as arranged -- at the curious Café Mozart place on H Street. The establishment is a German / Bavarian-themed restaurant within a bar within a convenience store. I had a Pilsner and potato soup and a coupe of the sausage pieces from Kevin's meal that he gave me. (Just FYI, but my lunch time meal was very healthy: baked salmon, broccoli, carrots, and rice.) 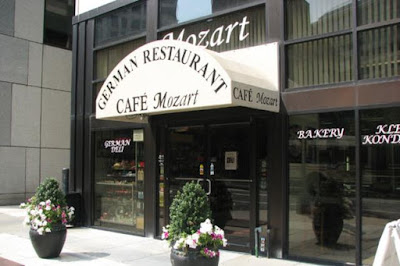 
Upon leaving, I walked to Exiles to meet my neighbor / friend Fred. It was while walking between the two places that I reached my dad (itself something of an impossibility) and I found out that he hadn't left the trailer park after all.
I had three drinks (vodka sodas) while at Exiles -- yes, that was too many -- but I was literally less than 800 feet from my apartment and I was somewhat agitated talking to Fred about my father staying to ride out the hurricane. But while there, we ended up in a nice chat with a lady in town from Minnesota. Based on what she said, I figured out it was this lady.
I told her about my dad in Florida and that situation. I then told her about the time my dad and I took a trip to Minnesota in 1986 ...
She told us about the time she took one of her two children on a multi-day car trip around Lake Superior -- and what she thought of Thunder Bay and its nearby attractions. 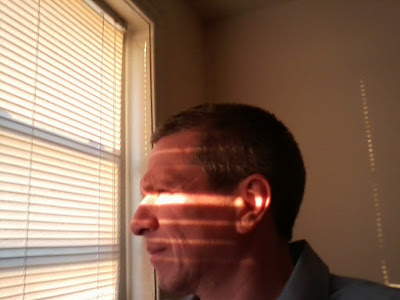 
OK, that's all for now. I honestly don't know what is going to happen with my dad. Just no idea, but if the eyewall really strikes Flagler Beach -- as it presently appears it is on track to do -- then all bets are off.
Here is the Melbourne NWS radar one last time:

Melbourne (MLB) NWS radar in standard base mode reflectivity, looped 12:59AM to 1:33AM Oct. 7th 2016.
The eye-wall is beginning to touch the coast -- near Fort Pierce. That's when all hell breaks loose. Cape Canaveral is going to get blasted -- with some serious damage (unless the storm makes a slight jog to the east and the eye-wall remains offshore). If it indeed reaches the coastline, I would expect the Melbourne radar will go down -- followed by the Jacksonville radar.
I should note that even though the radar colors -- mostly greens and yellows with a few orange and red splotches -- don't look that different from outer rain bands to inner eye wall, the fact is that radar images do not pick up the phenomenal wind speeds within the eye wall. In that sense, the radar images are a touch misleading.


In the meantime, two CWG entries with useful information are linked here and here. 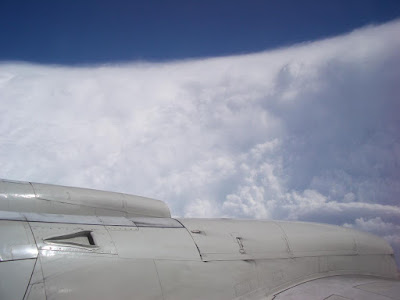 A NOAA hurricane reconnaissance plane in the eye of Hurricane Rita; note the pronounced "stadium effect" of the eye-wall clouds.
As I once recall from the soundtrack album to the movie "Popeye" with the late Robin Williams -- yes -- "the biggest tear I ever saw was in the eye of a hurricane."
OK, that really is all for now.

Melbourne (MLB) NWS radar in standard base mode reflectivity, looped 9:31AM to 10:05AM EDT Oct. 7, 2016.
The hurricane has remained about 30 to 40 miles farther offshore than at least the HRRR model indicated, but the eye-wall is still brushing the coastline.
*******


So my dad made it safe and at least semi-sound through the night -- not even losing power. He left me two voice mail messages -- one at 6:53AM and another at 8:57AM -- and then he texted me at 9:06AM. (I missed all of these for the reason given below.) He wrote that the worst would be by 3PM.
Looking at the MLB and JAX NWS radars, I see what he means.


Matthew is moving at 14MPH to the NNW and had top sustained winds still at 120MPH. The central pressure 945mb (27.86" Hg). The storm is centered 75 miles ESE of Daytona Beach -- so the worst is yet to come for my dad in Flagler Beach.
By the way, the death toll in Haiti from Matthew is now put at 572.


As a personal note, I'm not onsite at DOE HQ today but going into my regular office at L'Enfant Plaza. However, I was up so late last night -- 330AM -- and so tired that I slept nearly to 10AM this morning. I just crashed and missed everything (including those calls from my dad). I will be going into work by noon, but then I'll be staying late and possibly working over the holiday weekend from home to finish at least one of the two major assignments I need to complete.
I may update this entry later today as needed.
End of Update and Entry.