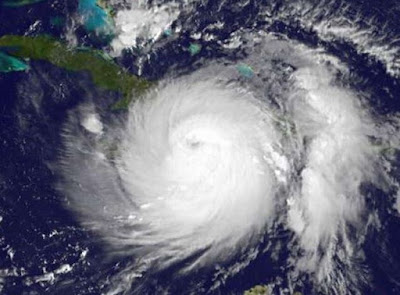 GOES-East visible satellite image of Hurricane Matthew at 7:45AM EDT Oct. 4, 2016 just before the storm made landfall in the western edge of Haiti's Tiburon Peninsula with top sustained winds of 145 MPH -- the strongest hurricane strike on Haiti since Hurricane Cleo in 1964.
Here is a New York Time account of the storm strike and resulting damage.
*******


Home at this late hour after a decent day at work and likewise a decent multi-part workout at the gym thereafter, although my core workout part leaves a lot to be desired. The jogging part is steady and I'm getting better at weightlifting. The swimming part is just extra at the end -- meant to be enjoyable and refreshing more than anything else.
For this entry, I'm only going to post a brief update on Hurricane Matthew.
For starters, Hurricane Matthew is on track for a forecasted rendezvous with the Florida Atlantic coastline that could be potentially disastrous, if not catastrophic, in places -- including where my dad lives just north of Flagler Beach. Indeed, my dad needs to evacuate, and I texted him that after speaking to him last night (he called me).
Because he doesn't receive my texts or calls -- or at least he says that he doesn't -- I had my mom (his ex-wife of 41 years) text him and he responded promptly to her saying that he was planning on a two day evacuation. 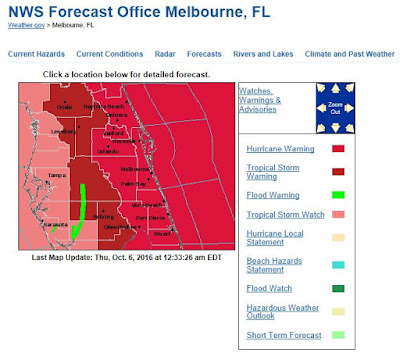 
Matthew looks like it will hit as a strong category 3 hurricane starting tomorrow night and by "hit," I mean the eye itself might literally ride up the Florida coastline from the Fort Lauderdale area to Jacksonville (that is the center line of the NHC track).


Right now, the hurricane has top sustained winds of 115MPH, but this is expected to rise to 135MPH before weakening -- and the 11PM discussion indicated that the central pressure had dropped to 961mb and eyewall is contracting while eyewall cloud tops are cooling. 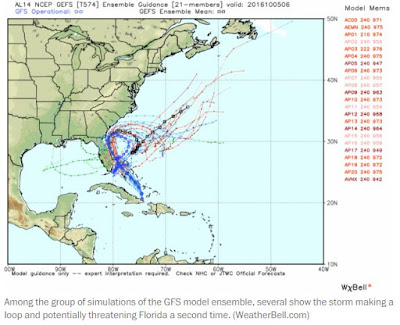 
But the models -- i.e., various runs of the operational GFS and Euro and a number of ensembles -- show the storm recurving and potentially executing a loop that brings it back (significantly weakened) into the Florida coastline in six or seven days.

Reworked map of the GFS forecasted upper level steering currents and surface pressure over the United States for the period Oct. 6 - 8, 2016. Key features are noted.
Image from this CWG entry.


This is because the upper level trough passing to Matthew's north will not be strong enough to pick it up -- even while a ridge builds in from the west, causing the storm to start a southeastward turn back toward the Bahamas.
However, having churned up so much colder, deeper water, the storm is unlikely to reenergize itself and instead will likely weaken. (In crude biological terms, you can't poop in your own food dish.)
Oh, and there is also Tropical Storm Nicole out there -- and the possibility of a Fujiwhara Effect taking place that will also affect Matthew's motion. 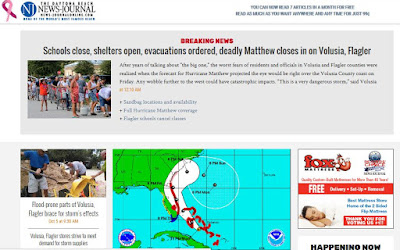 
All kinds of evacuation orders are in effect up and down the Florida coastline and into coastal Georgia and even parts of coastal South Carolina. As for my dad, I don't see him going to a shelter and instead will likely just drive until he finds a cheap motel somewhere on the Gulf side of Florida.
Again, I'll have more to say about Hurricane Matthew tomorrow and/or Friday as the situation develops. There was widespread destruction in the afflicted areas of Haiti and eastern Cuba.
As for here in D.C., the weather is, well, basically, nothing. Indeed, the weak frontal boundary associated with the shearing out shortwave passes through with maybe a random sprinkle on Saturday, it looks to be dry for the next week and, quite possibly, the next two weeks.
As a brief election news update ... 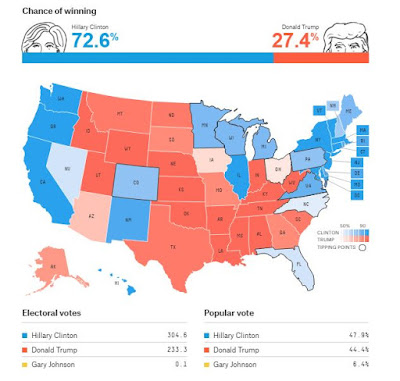 
First off, I'm just ignoring outright the VP debate last night and why Pence "won" -- at least in the mainstream whore-media narrative. Instead, I just want to note that Hillary's poll numbers have improved markedly and in the most recently updated FiveThirtyEight polls plus forecast, she has a 72.6 percent chance of winning to Trump's 27.4 percent chance. However, nothing can be taken for granted given the consequences of a Trump presidency. 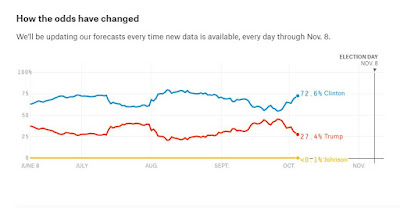 
Oh, and I recommend this Nate Silver piece: Election Update: Maybe It’s Time For Ohio And Pennsylvania To Part Ways. The image directly below appears in it (see caption).
The upshot is that Ohio and Pennsylvania are not as closely correlated as Midwestern states are with each other -- and that correlation is getting weaker with time. 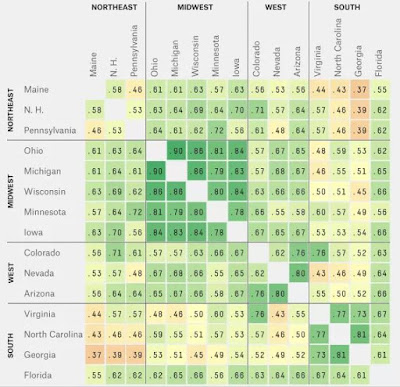 Correlations between Clinton-Trump margin in polls only in the FiveThirtyEight forecast model for selected states in different regions of the United States.
*******


I would also like to post a link to this funny TalkingPointsMemo.com piece about how conspiracy nut Alex Jones of "Info Wars" totally flipped out when Julian Assange's much-hyped "October surprise" that was to destroy Hillary Clinton politically turned out to be a total dude -- just an infomercial from 3 to 4AM ET sent from where Assang remains seemingly permanently holed up in the Ecuadorean embassy in London.
The picture and headline that accompanies it are hilarious: 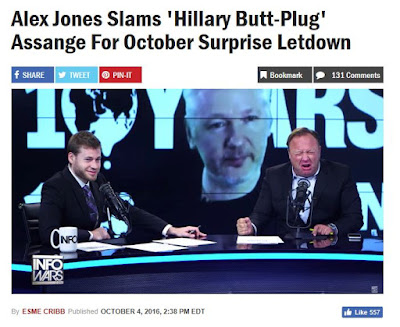 Screenshot of the headline and story on TalkingPointsMemo.com of the story cited above.
*******


Speaking of hilarious, post a clip from a Sanford & Son episode that I have been meaning to post for the past few days:
The episode is "Rated X" and it features Fred, Lamont, and Rollo at a movie studio where they think they are going to make a legitimate film -- except it turns out to be an X-rated film (and there is some suggestion a gay one at that).
Remember that this was in 1973. And on network television.
Just as they are about to indignantly leave, the place is raided by the police -- and they end up in jail. That in itself is a hilarious scene. But once in jail, Aunt Esther -- Fred's sister-in-law -- comes to bail them out, and the fight scene between them is one of the funniest of the entire series. (In case you don't know the characters, Elizabeth is Fred's late wife and Esther's sister.) 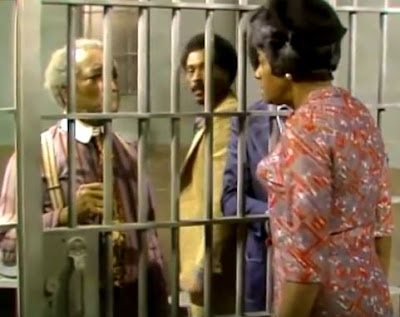 Aunt Esther: Fred Sanford, I'm glad my sister isn't here to see this and see the AWFUL STAIN you put on our family!
Fred: Listen, Esther, I didn't put no stain on yo' family. Yo' family was stained when I metch y'all.
Aunt Esther: DOAN CHU TALK ABOUT MY FAMILY!
Fred: I'LL TALK ABOUT'CHYO FAMILY! Every time a baby was born, they had that UGLY stain on 'em! That's right! That UUUUGHLY STAIN!! Even AJAX couldn't do NOTHIN' with a stain like that!
Aunt Esther: HOW DARE YOU SAY SOMETHIN' LIKE THAT ABOUT MY FAMILY! WHY YOU BEAN EATIN' BEAR HUGGER!
I have no idea what is a "bean eating bear hugger," but it's hilarious. 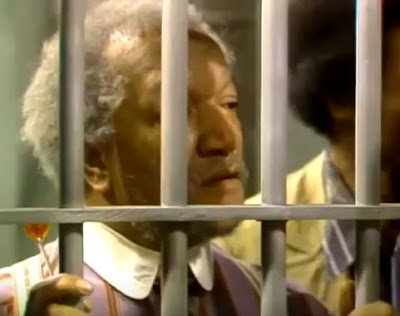 Then, when the police station lieutenant comes out to release them and Lamont tells his dad to be quiet, Esther screams:
YEAH! SHUT'CHYO DOUBLE-BREASTED LIPS, YOU DIRTY OLD MAN! GUILT IS WRITTEN ALL OVER YO' LECHEROUS FACE!
Fred then stammers: 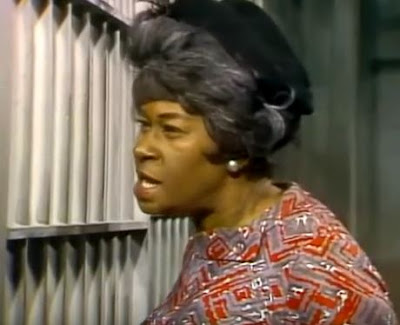 Esther then demands that they be kept in jail a bit longer so she can start preaching the Bible to them because "these heathens ain't gonna stand still to listen to this!" 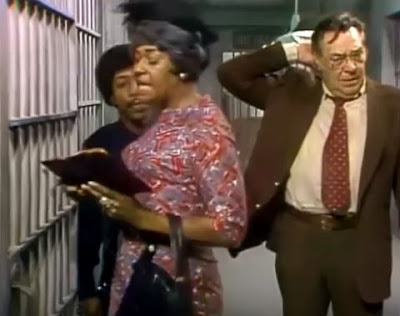 The verses -- Isaiah 42: 5-7 -- are actually quite lovely and totally appropriate for the occasion. Here is the King James version:
5 Thus saith God the LORD, he that created the heavens, and stretched them out; he that spread forth the earth, and that which cometh out of it; he that giveth breath unto the people upon it, and spirit to them that walk therein:
6 I the LORD have called thee in righteousness, and will hold thine hand, and will keep thee, and give thee for a covenant of the people, for a light of the Gentiles;
7 To open the blind eyes, to bring out the prisoners from the prison, and them that sit in darkness out of the prison house.
*******


And on that note, I'm going to end this entry. Tomorrow night is a non-gym night but my plan is to be home in time to post an entry. If that doesn't happen, then the next one will be on Friday.
--Regulus