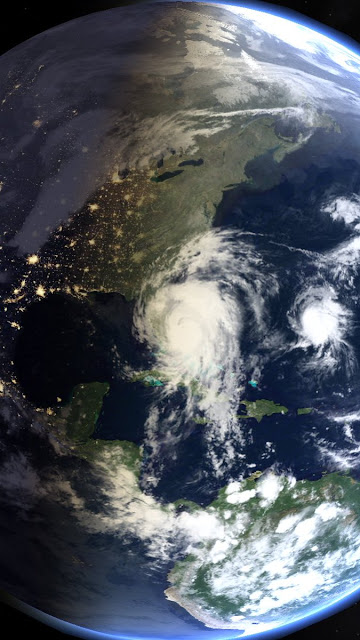 An interesting composite image of Hurricane Matthew taken early this morning as seen from low Earth orbit with the lights of the cities of the central United States still visible beyond the terminator line. I'm unsure how this image was created although part of it is a direct visible image of the hurricane and the U.S. East Coast.
OK, I was going to post this as an update to my previous entry, but it just makes sense to post a complete new entry.
*******


So my dad weathered the hurricane -- no pun intended -- without any harm or trouble, although he is in the dark tonight and is likely to remain without electricity for days. Keep in mind how humid it is so it will be very uncomfortably. But his trailer -- and the whole trailer park -- seems to have survived in tact, although the unlikely tall Norfolk pine that grows next to his place might not have. At the very least, it lost a lot of branches. 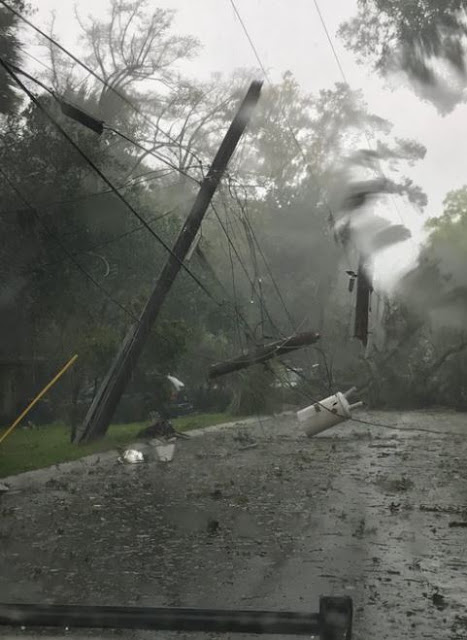 
Yes, I'm very relieved and thankful ... Of course, this means I now have to go down there for Thanksgiving after all and stay in that trailer dump ground. It goes without saying that part of Florida is basically a semi-third world country.
As I've mentioned before, the unofficial currency down there is knock-off OxyContin and the bulk of the population is either retired or unemployed / unemployable. The highest aspiration in life for many of those of working age is to get full Social Security disability. But now I'm getting off topic. 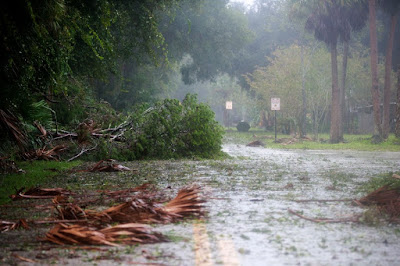 
Hurricane Matthew has left over a million customers -- which represents a lot more than 1 million people -- in the dark in Florida, Georgia, and South Carolina. In terms of evacuations, over 2 million people vacated their homes -- although, as I mentioned, my dad was (foolishly) not one of them.
In the end, Florida thankfully really dodged a $100 to $200 billion bullet involving catastrophic damage along 200 miles of shoreline thanks to the track that kept the eye itself (and surrounding eyewall) just narrowly offshore as the storm tracked up the Florida coastline.
The real death and devastation was in western Haiti and, to a lesser extent, eastern Cuba. 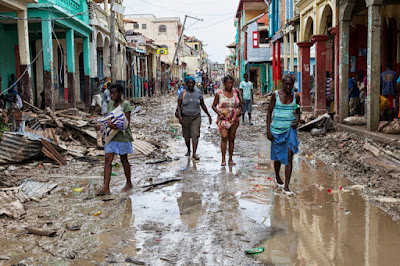 Destruction and muddy debris along a street in Jérémie, Haiti in the wake of Hurricane Matthew.
******* 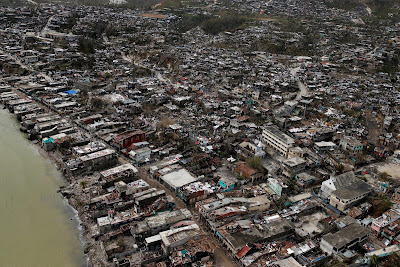 Aerial view of the total destruction of Jérémie, Haiti as a result of Hurricane Matthew.
*******


While there have been some fatalities in the U.S., in Haiti the death toll has climbed to a reported 842 -- and may very well go over 1,000 as bodies are recovered. (I suspect the name "Matthew" will be retired from the roster of Atlantic basin hurricane names.) Here is the New York Times account of the devastation in Haiti. 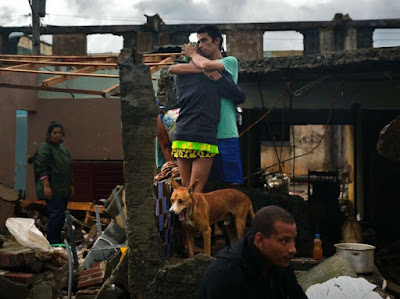 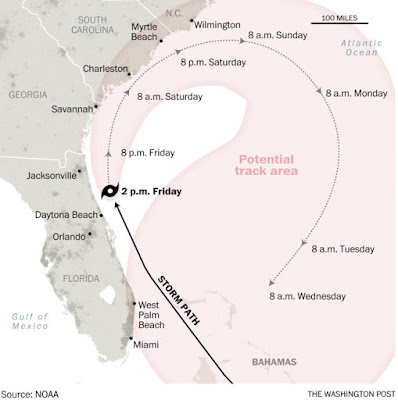 
The cyclone is moving to the north at 12MPH bringing a very stormy night to the South Carolina coastline. However, a recurvature is anticipated that keeps the eye narrowly offshore -- and that eventually results in a weird complete loop that brings it back to the Bahamas in four or five days.
Of course, any change in the track that brings the eye ashore would cause serious trouble for the South Carolina coast.


By that time, the system should be quite weakened and not have nearly the warm water to work with due to all the upwelling it caused through heaving seas. However, all is not said and done until the passing upper level trough indeed fails to pick it up.


OK, that's all for now. This update is coming to you from the office at quarter to 9PM -- lights out except for a lamp I set up and a small fan whirling away as I listen to the AccuRadio.com smooth jazz station. I didn't get in until lunchtime but then stayed to complete putting together a comment tracker spreadsheet for an upcoming DOE document for federal agency energy managers.
My inclination is not to go home but instead get dinner somewhere and then stop at Trade and/or Floriana. However, I'll have my laptop with me in my book bag, which is a bit of a hassle.
My next planned entry will be tomorrow evening. 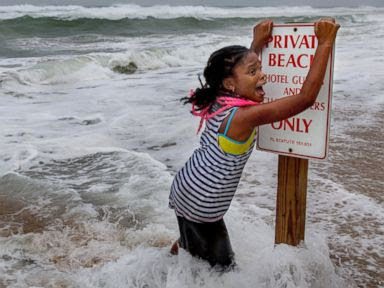 Unsure if this picture I found online is associated with Hurricane Matthew or some other powerful ocean storm, but all I have to say is: That's a PROFOUNDLY bad idea, young lady, what you are doing. The gargantuan might of the sea (to use a phrase I heard once and really like) goes without saying.
--Regulus
Posted by Regulus at 9:35 PM