At T-Minus 11 Days, Some Late Night Depressing Thoughts on the Election and the Aftermath Even If We Avoid Actual Trumpocalypse 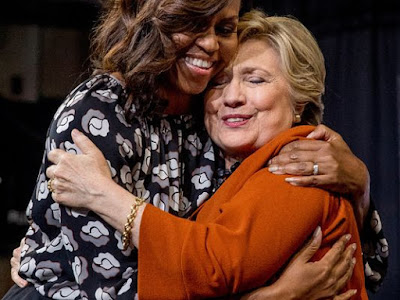 Michelle Obama and Hillary Clinton hug at a boisterous campaign rally in Winston-Salem, North Carolina, October 27, 2016.
The First Lady of late has been making a powerful, eloquent case against Donald Trump and for Hillary Clinton.
*******


OK, so the following ruminations probably fall into the category that Bartender -- and Hillary campaign bundler -- Dito often calls a "bed-wetting Democrat" -- that is, a Democrat afraid of everything, even winning.(I actually recall the late political blogger Bartcop using that term as well. About Bartcop, he is missing such an incredible campaign -- and we're all poorer without this excellent insights, wicked humor, and awesome political images.) 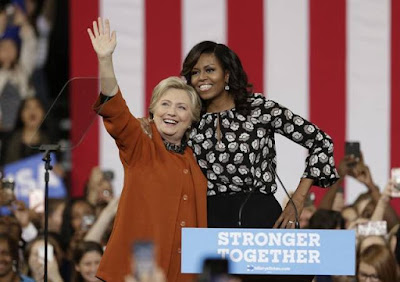 
So we're at a point where the polls are indeed tightening -- much to the media's entertainment complex's delight -- between the Madame and the Madman. The fact that it is reflects a basic dysfunction and sickness in America's political and even cultural bloodstream. 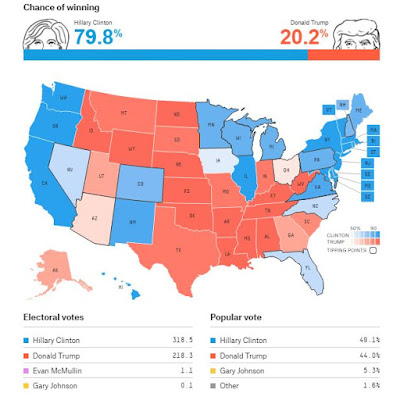 
Nate Silver has one of his always-trenchant takes on the unusually wide range of outcomes in the presidential preference polls that are coming out at firehose intensity. The article link is here: Election Update: The Polls Disagree, And That's OK.
The next two images are taken from that Silver piece. I also quote from the article in which he explains each chart. 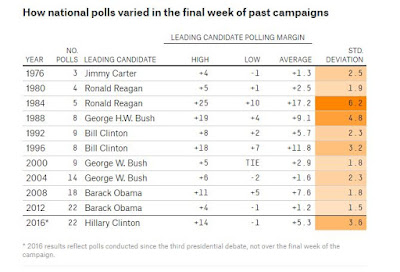 Quoting Nate Silver: "In the table [above], I've compiled a summary of national polls conducted during the final week of the campaign in elections since 1976. (I used just one poll per polling firm — the last one each released before the election.) For 2016, I'm showing the numbers for national polls since last week’s presidential debate. Note that this is not an apples-to-apples comparison: There's a good chance the polling range will narrow over the final week of the campaign because of herding (pollsters sometimes get scared to publish results that seem like outliers as the campaign draws to a close)."
******* 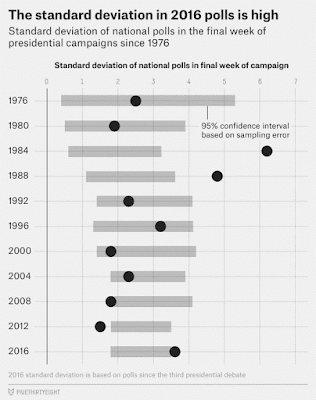 Quoting Nate Silver: "How much should you expect the polls to differ from one another? Even if there were no methodological differences, you'd expect some variation as a result of random sampling error. Could the seemingly huge spread in the polls this year turn out to be nothing more than statistical noise?
"Probably not. For each election, I ran 10,000 simulations in which I estimated how wide the range of the polls "should" be based on the sample size of each poll. From these simulations, I also calculated a confidence interval for each election; in theory, the standard deviation in the polls should fall within this interval 95 percent of the time.
"The standard deviation for the 2016 polls -- 3.6 percentage points -- falls just outside the confidence interval, which runs from 1.8 points to 3.5 points. That suggests there are probably some real methodological differences and that the wide spread in the polls doesn't reflect sampling error alone."
******* 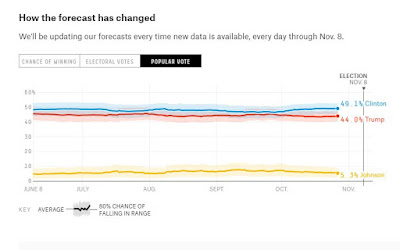 
The FiveThirtyEight models -- all three of its iterations -- show a distinct drop in Hillary's chances with the polls plus forecast now under 80 percent (versus the Upshot and Huffington Post models that are as of now at or above 90 percent). (See images above and below.) 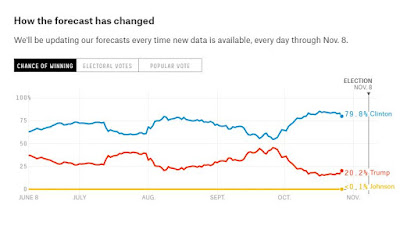 
I fully expect this drop to continue right up to election day when it could be damn near a 55-45 percent split, which is to say, practically a coin toss.
So the survival of the country will come down to that.
Of course, even if Hillary Clinton wins, it is becoming ever-clearer what the Trump and Republican Party strategy will be. 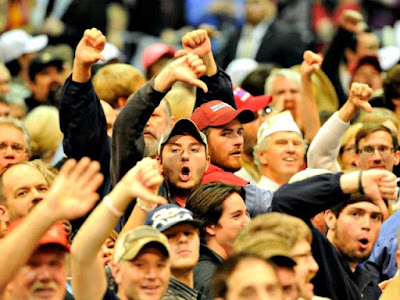 
For Donald Trump, it's all about establishing a Fox News-rivaling commercial media empire of virulent propaganda in which all those angry, disenfranchised white working class folks and whatever remains of the Republican Party's older coalition are simultaneously kept whipped up into a mouth-foaming frenzy about the "stolen election" and the rest of "Hillary's crimes" -- to quote Matt Bai from an excellent column* on Thursday -- she is "a killer or the devil, or maybe both" -- and fleeced for all their worth by the Trump, Inc., juggernaut. 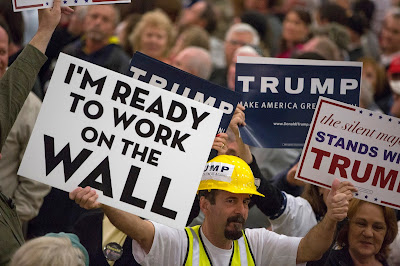 Think Benito Mussolini meets Silvio Berlusconi meets Elmer Gantry.
Trump's efforts at establishing such a toxic media empire are already tentatively underway.
*If you really want to come away feeling depressed, just dive into almost ANY of the as-of-now 9,340 comments associated with that Bai column. It's a truly sick discourse in our country and a large segment of the population dangerously benighted. I guess the good news is that most of these internet commenters are strictly keyboard warriors (many old, overweight, and only weakly mobile) living out their sad existences. 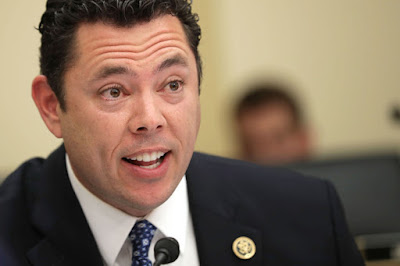 For the Republican Party, Utah Republican Representative Jason Chaffetz (pictured directly above) -- a man who manages the interesting feat of simultaneously being a pompously and ultra-conservative Mormon Member of Congress self-righteously representing his Utah district and an opportunistic political sleaze bag -- gave away the game in an interview with the Washington Post's Dave Weigel in which he pledged to make Hillary Clinton's presidency a Bataan death march, or maybe it's better to say, a decent into Kafkaesque madness -- of endless bullshit Congressional investigations into endless bullshit.
Jonathan Chait has this very good, albeit deeply depressing take on the matter (link embedded): House Republicans Already Have a Plan to Make Hillary Clinton's Presidency a Living Hell. 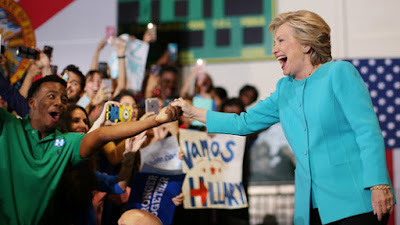 This doesn't even take into account all the loose and crazy Republican talk -- facilitated by the rightwing media/entertainment complex -- of violent "revolution" if Hillary Clinton wins
.

What this means is that even if we avoid an actual Trumpocalypse, the Republican Party led by Donald Trump is so deranged, unhinged, and reckless that America by 2026 could still be a very dark and damaged place.
Now if Trump pulls off an upset victory -- and I still just don't see that happening -- then all bets are off because the country's very democratic institutions might very well not survive such a destructive, sociopathic, authoritarian, pathologically lying narcissist as leader aided and abetted by a cult-like Republican Party. 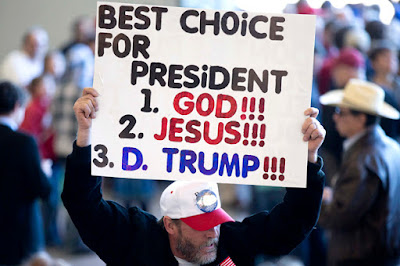 That world-renowned special brand of American fundamentalist stupidity on proud and clueless display.
*******


Of course, any country that would willingly elect Trump in a free and fair election pretty much deserves what it gets.
OK, that's all for now. I had planned a different themed entry tonight but ended up with this one.
--Regulus