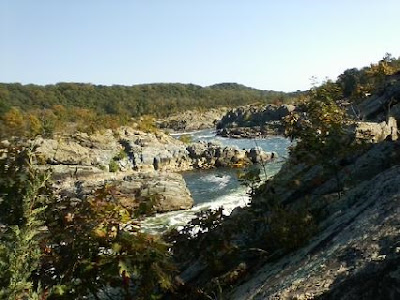 
Well, I was going to write a full entry tonight but I'm too frickin' tired after a long day including work and a multi-part gym workout. (OK, I ended up writing a semi-lengthy entry anyway.)
I'm deeply annoyed by the weather -- it's too goddamn hot and too goddamn dry (that is, no rain) -- here in mid-October and this follows what has mostly been a suck-ass weather year even by D.C. area standards, where nothing much ever really happens. 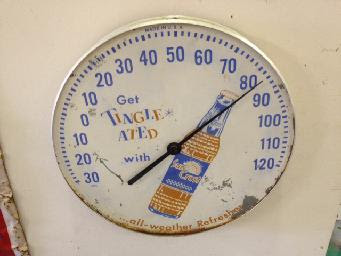 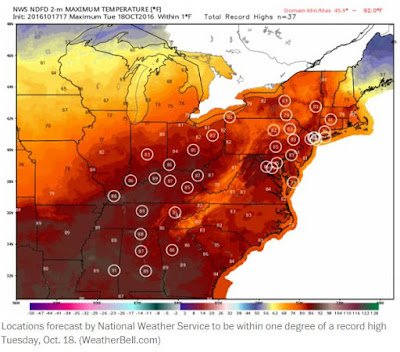 NWS National Digital Forecast Database (NDFD) 2-meter maximum high temperatures (in Fahrenheit) forecasted for Oct. 18, 2015 for eastern portions of the United States with those stations within 1F of the daily record high circled -- as prettied up by WeatherBell.com.
*******


The forecast calls for mid-80s Fahrenheit warmth for the rest of the workweek and overnight lows that could exceed daily record high minima (lows). And no fucking rain.


To be clear, there is a chance of rain in the Thursday - Saturday time frame as a cold front crosses the region, but that is uncertain with the operational GFS wetter than the Euro, and regardless, that same old fucking ridge / higher heights anomaly reestablishes itself over eastern North America and GOD-ON-HIGH gets all happy because of it.
Anyway, rather than post all the records for the next three days, I'm just going to repost this tweet that the Sterling LWX crew sent out on Oct. 16th with all the relevant info: 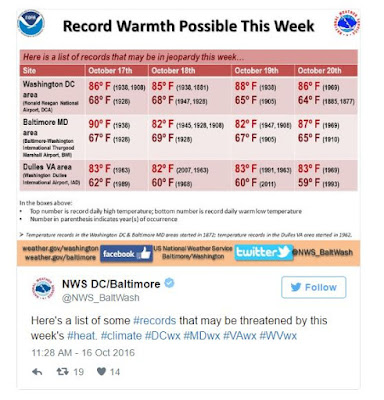 
The CWG -- whose writers such as Jason Samenow and Ian Livingston seem to just love this weather -- and/or pretend that this is "just Indian Summer," when it is not but rather a full-on extension of summer -- had the following entries (links embedded):
D.C.-area forecast: Summer surges back, 80-degree weather next four days
Record-breaking October heat on the move toward East Coast
PM Update: Record high today at Dulles, more warmth records likely through midweek 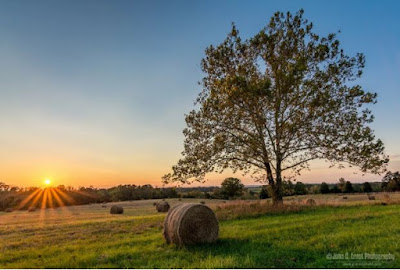 
Speaking of CWG, it had an entry on Sunday discussing the pig-and-chicken shit watery ecological disaster in North Carolina as a result of the flooding rains from Hurricane Matthew last week. This particular entry was actually picked up by the regular news section, so it had more views and comments than is normal for a CWG entry. 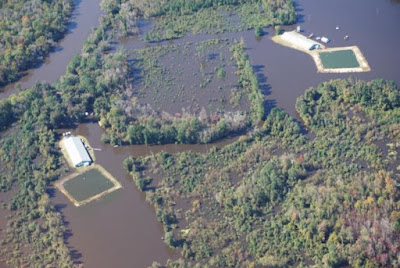 Aerial view of a flooded hog farm with its overflowing "lagoon" of pig shit in eastern North Carolina in the wake of Hurricane Matthew.
*******


Here is that entry (link embedded): Factory farming practices are under scrutiny again in N.C. after disastrous hurricane floods.
I posted a comment last night that actually is the most liked -- 46 at last count, a new record for me. I'll repost it here:
The solution is obvious -- and I'm sure the North Carolina state legislature and its philosopher-king governor are already arranging this -- but here goes:
*BAN any aerial drone footage of these floods;
*PROHIBIT any testing of the water by ANY state environmental agency or organization;
*YOWL AND HOWL about federal heavy-handedness when the EPA tries to investigate -- getting the Trump portion of the electorate worked up into a mouth-foaming frenzy;
*Pass legislation defining "ORGANIC" to include "any and all outputs from all natural bodily functions of all animal husbandry products";
*Whip up a SILLY DIVERSION about unisex bathrooms and transgendered people "correctly" identifying their gender;
*PROSECUTE anyone who breaks the bans and prohibitions listed above;
Put it all together, and everything will be just fine.


Oh, and on a personal note, let me just add this: "Matthew" ... "North Carolina" ... and a vast flood of pig-and-chicken-shit filled water going nowhere ... How very appropriate for a certain Not Special Someone. 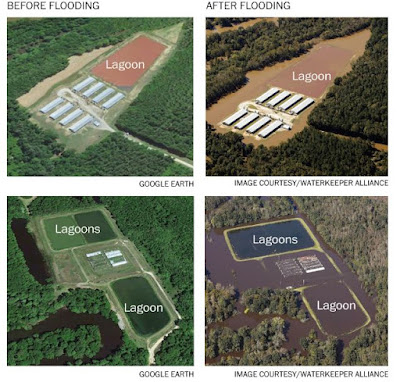 Before and after Hurricane Matthew aerial pictures of flooded pig farms and their lagoons in the  eastern portion of North Carolina.
*******


OK, I'm going to sign off now rather than post any additional content.
I would like to write about my interesting Sunday that ranged from nearly getting clocked in the head by accident with a large hookah (brought by a cocky, talkative young Russian guy who works at the Russian embassy off Wisconsin Avenue) and falling off a rickety picnic table at Great Falls National Park in Virginia (I would have been knocked unconscious had I not caught it in time). 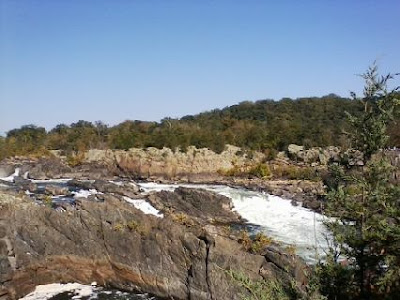 
As well as crouching under Canal Road by Fletcher's Boathouse at Fletchers Cove to get over to the Capital Crescent Trail and, later, enjoying a pleasant evening outdoors at Tony and Joes with Kevin and two other people I met, one of whom (Russ) I had a nice dinner thereafter at Mai Thai in Georgetown and walking back to Dupont -- admiring the just-past-full Hunter's Supermoon. 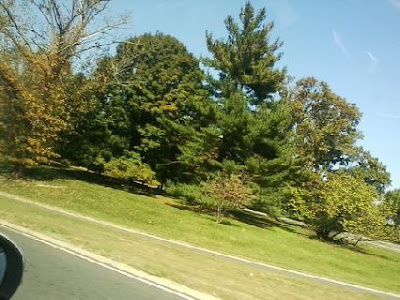 
My plan is to write about this in an entry tomorrow. My intention is to come home after work and have some time just to do that. It is a non-gym night, but I'm not going to stop anywhere to drink. As it is, I have a lot to do at work and I'm behind on it.
I would like to post the current FiveThirtyEight polls-plus forecast election outlook -- and just leave it at that. 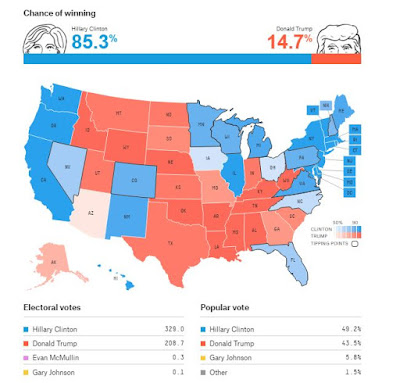 
However, I cannot tonight handle any discussing the manic shit flinging from Donald Trump that isn't that far away from actually inciting violence when he loses -- unless the whole thing is -- as Jonathan Chait has speculated -- is just a massive scam to build a media/entertainment empire.

Indeed, it wouldn't shock me if Trump actually backs out days before the election. Alternatively, those less likely, I wouldn't be shocked if he calls for actual violence by his crazed supporters. 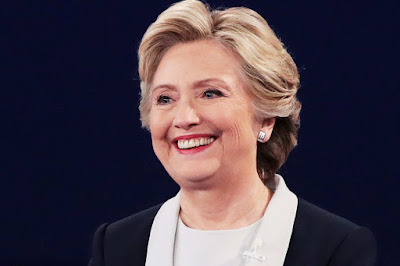 I also can't handle discussing anything about the corporate media/entertainment perpetual motion machine involving this goddamn election and the need to pretend that this is anything but normal. Suffice it to say, the Madame is doing well with three weeks to go that can't pass soon enough -- and she is planning a big push into some red states such as Arizona, Indiana, and Missouri. 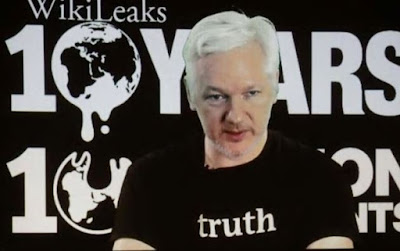 Oh, and I'm happy that Julian Assange's goddamn internet connection has been cut. True, this won't stop the toxic "drip drip drip" WikiLeaks sludge of Kremlin-facilitated hacked emails designed to do nothing but hurt Hillary's chances, but at least it knocks this idiot out for a time. Reports say it was his Ecuadorian protectors that cut his internet access. Remember he has been holed up at Ecuador's embassy in London for over 4 years now avoiding extradition on a rape charge in Sweden. 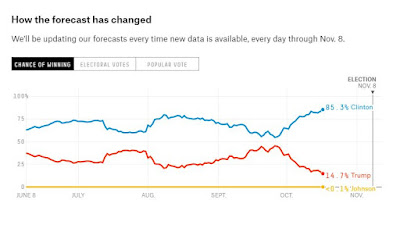 FiveThirtyEight.com Hillary Clinton and Donald Trump trend line of odds of winning from June 8th - Oct. 18th, 2016 in the current polls plus forecast model
In the polls only, it is presently 88.1 to 11.9 percent and in the now-cast, it is 90.7 to 9.2 percent.
Note that we are close enough to the election that the candidate names are now running into the Nov. 8th finish line. Also, in the now-cast version, Trump is so low that his name and chances are actually atop those of that idiot Gary Johnson.
*******