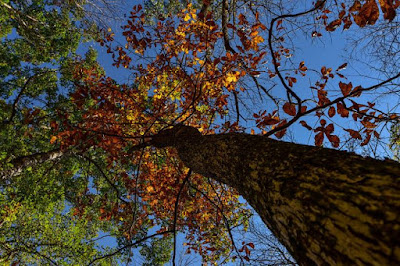 Deep blue sky frames the arboreal fall foliage with branches already trending toward bare in Sky Meadows State Park, Virginia, in a photo taken by Flickr user Angela N and reposted in this CWG entry.
The color turnover this year is quite muted because, I think, it has been so dry the past few months. The leaves just appear to "want to fall off" without much of a display.
******* 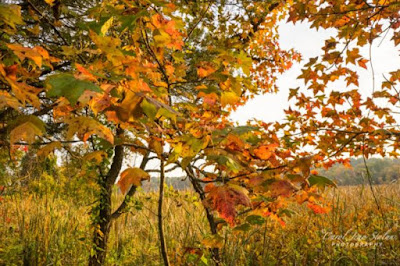 Here is a nice fall image taken by photographer Carol Jean Stalun (Stalin??) at Dyke Marsh along the Potomac River in Alexandria, Va., presumably in the past few days, and featured in this CWG entry.
The next set of pictures were taken by me on Sunday -- you can tell by the low-quality, around-the-D.C.-area images.
*******


Home in my wee dust trap of an efficiency somewhere in Washington, D.C. It's late already, so I'm not going to bother with an entry. Besides, I'm tired of blog entries...
Sigh.


I went to the gym earlier tonight following a busy day at work in which I finished a vexing assignment. Now I can finally move onto other stuff. 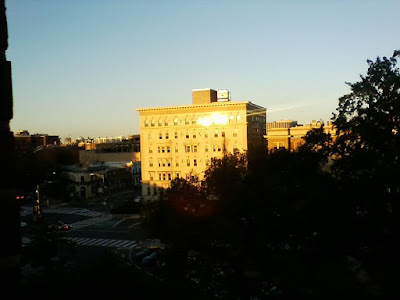 
I came home and made dinner. It was actually a steak -- which I don't normally buy -- plus steamed broccoli and mashed potatoes. I realized as I was making it that this is the sort of dinner that GASY the HANGRY CHIPMUNGORILLA would have -- except GASY would have "purchased" the steak from the Giant using his favorite "skeleton key" code of tangerines -- thus getting a $15 steak for 89 cents. 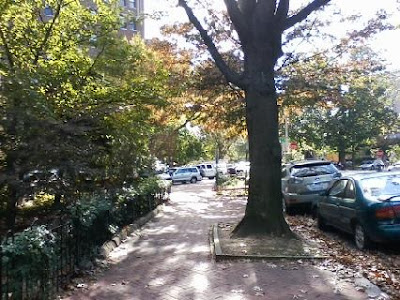 
In the meantime, GASY the HANGRY CHIPMUNGORILLA would have found another $1,000 on the ground outside a bank while a frantic person came running back -- obviously having just dropped it -- but GASY would be true to himself and his ethics and keep the cash while affixing that stupid blinking blank stare look on his face. 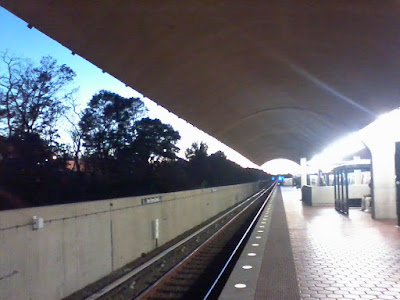 The Van Dorn Street Metro, Arlington, Va., at dusk, 6:44PM October 23, 2016.
I arrived at the King Street station but just had just missed a Blue Line back into D.C., and rather than wait at the station for 17 minutes, I rode a Blue Line train heading toward Franconia-Springfield station and got off at Van Dorn Street station, where I had a 5 minute wait.
That's the kind of stuff I do. 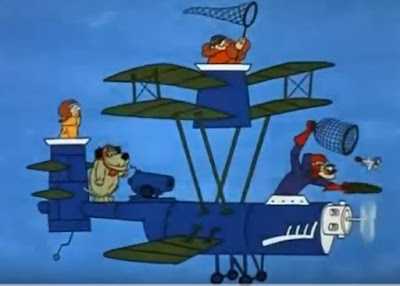 Now I have an unpleasant memory involving GASY and the Van Dorn Metro from many years ago early in our friendship -- circa 1997 or '98 (I was still living in frickin' College Park).

As background, he was meeting some guy named Dan on a date. This Dan, I recall, had a condo not far from the Van Dorn Metro -- which was then the end of the Blue Line -- furnished with all IKEA furniture.

I'm not sure why I was with GASY -- I was with him for some reason, I think he wanted me to go (otherwise he wouldn't have taken me), but at that point, he wanted me gone and dumped me off at that Metro so that I could ride all the way back to College Park while he did whatever.

That was a very GASY thing to do. Oh, and he pretends he's doing you a big favor.


Oh, and because he's GASY, he'd get a big, huge raise at work -- typically, on the order of 25 percent -- along with an "apology" because it was discovered that he had been "underpaid" for the past 36 months and enclosed here's a check for $8,500 for your troubles.
Now let's play some online fantasy football bullshit or gay poker night or bowling with the Trump-voting-and-food stamps crowd in Crofton and -- voila -- another $2,000, all ending at Larry's Trap House for three to six Long Island iced teas. 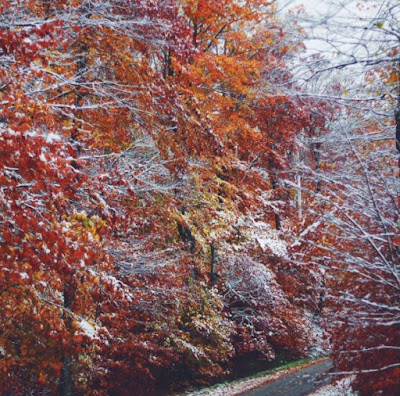 The first snowfall of the season dusts the colorful fall forest in or near Windham, Vermont, Oct. 23, 2016; photo by Christopher Lewis and featured in this CWG entry.
*******


My weekend was alright, I guess. On Saturday night, I met Kevin at Old Ebbitt Grill's Old Bar. His friend Shane -- a former Air Force officer -- came along and we had quite a nice time. On Sunday, I managed to take the Metro -- weekend single-tracking, safety repair "surges," and delays galore -- to Old Town Alexandria and had a very dinner at the bar at The Wharf. I particularly liked my bartender/waiter, a young fellow originally from Turkmenistan. 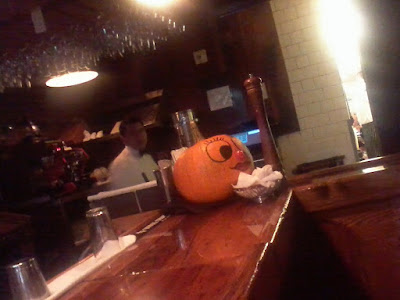 
I took the Metro back and stopped at Trade, had a pleasant enough conversation with someone, and headed home, although Fred invited me over to his place next door in the Northumberland and Doug made us some Manhattans. I got home and to bed maybe around 1030PM. 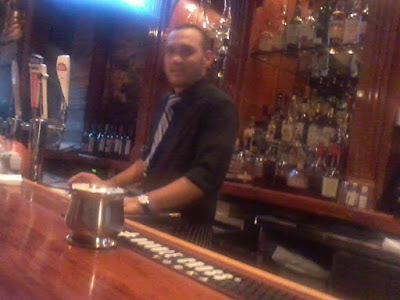 
There is a number of things I want to write but it's just too late and too much effort to do so right now. I do want to note that Halloween is coming and -- as I wrote last year -- I don't "do" Halloween costumes of any sort. Ever.
You see, Gentle Reader, I accept the fact that I don't have any talent whatsoever when it comes to acting or singing, and wearing costumes around Halloween and/or a costume party (or as the British would say, to a "fancy dress party" ) is just an extension of that. 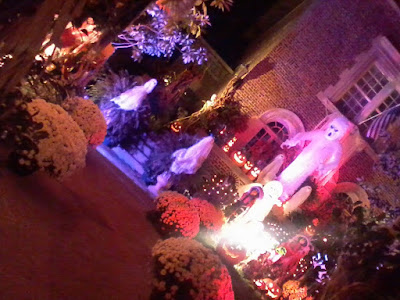 
I mean, I guess I could try -- and go around in, for instance, cultural period drag and just look stupid.
When I've tried in the past, I end up looking like an unhappy garden gnome or ashen-gray leprechaun. Well, anyway, enough of that. 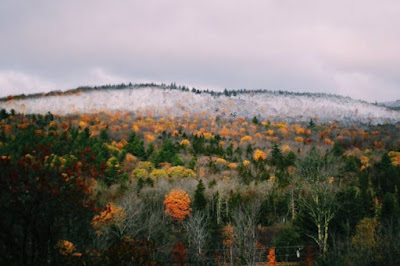 Another photo by Christopher Lewis and featured in the above-linked CWG entry showing the Green Mountains of Vermont dusted with the first snowfall of the season, October 23, 2016.
*******


Indeed, that's all for now, although I do recommend this interesting piece by Nate Silver -- he of the FiveThirtyEight site -- on why his forecast model gives madman Donald Trump a much higher chance -- presently, 16.1 percent -- of winning the presidency than other forecast models including the New York Times Upshot site and Huffington Post ones (those presently have Trump at 8 and 4 percent, respectively, and the Madame at 92 and 96 percent, respectively). 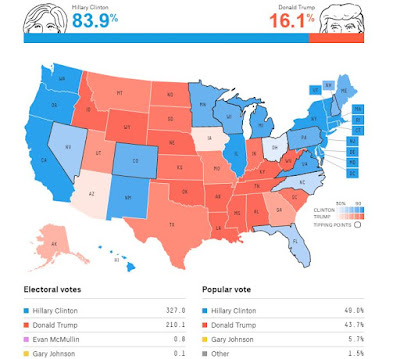 
The underlying assumptions in Silver's model -- which I think make a lot of sense -- are quite intriguing. Coming from a meteorology background decades ago, I can see the real value in having such a sophisticated model. 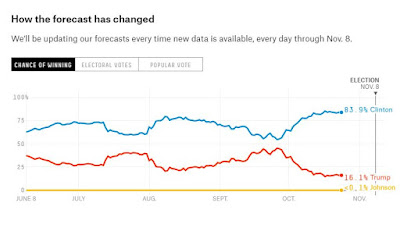 
OK, I'm signing off. Oh, yes, it is a chilly, calm, dry night. There is a chance of some needed rain on Thursday, but not much of a big deal. Tomorrow (Tuesday) night and Wednesday morning are forecasted to be quite chilly with lows ranging from near freezing in the far-and-away exurbs to 45F in downtown D.C. and Baltimore.
I'll try to post an entry tomorrow night, but it's a non-gym night so I probably won't.
--Regulus