Hello, little Monarch butterfly, friend. How are you doing ...? 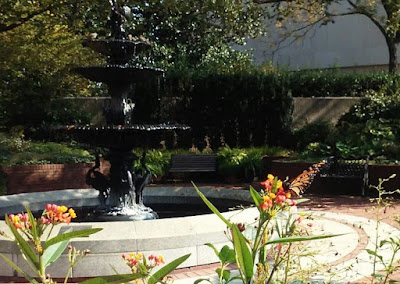 A Monarch butterfly near the fountain in the Mary Livingston Ripley Garden next to the Smithsonian castle, Washington, D.C., 1:02PM October 20, 2016.
My coworker and friend Ellen took this photograph. I cropped the image a bit.
*******


Once again, it's late as I start a blog entry and, as is usual with these entries, it is occurring after a day at work and a gym night. Actually, it was a rather good multi-part gym workout. And, once again, I am declaring that it is too late for me to write much of an entry. 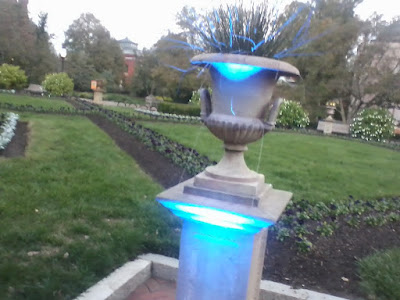 Enid Haupt Garden, Smithsonian, Washington, D.C., 6:29PM October 19, 2016.
There was some formal, ritzy affair occurring in one of the galleries of the Smithsonian and there were set up throughout the garden these deep blue lights for decorative purposes. My cheap flip-open cellphone camera made the color look more turquoise than it was.
*******


However, unlike when I usually say that and then compose / format a lengthy entry that keeps me up until at least 2AM -- sometimes later -- in this instance, I really am going to keep this entry brief.
Update before posting: OK, then, I finally posted this entry at nearly 220AM, making a total liar out of myself about late night blogging. Again. I guess it's just pathological.
I'm going to refrain from writing anything about last night's final presidential debate between the Madame (Hillary) and a madman (Donald Trump) except to say she did, as ever, masterfully in her understated and always-underappreciated way while he gave a performance that was only slightly less behaviorally bizarre but as weirdly disjointed and factually incoherent as ever -- a spiteful and deeply vengeful egomaniac who lies pathologically and, despite the occasional moments of substantive clarity, is temperamentally dangerously unqualified to be President of the United States. 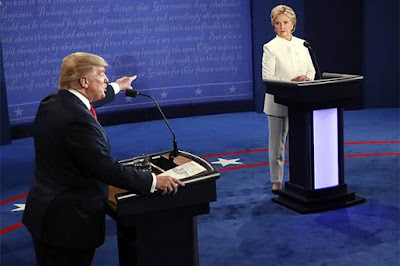 Much has been made today -- and rightly so -- over two Trump doings from last night -- including his truly extraordinary pointblank refusal to say he would honor the election outcome if he doesn't win (a win for him being, at present, a highly unlikely outcome) and saying -- or rather, uncontrollably blurting out -- of Hillary when she got in a pointed little jab at him, "Such a nasty woman." (He also angrily called her a liar, a criminal, and disqualified to run for president; she never took the bait.) 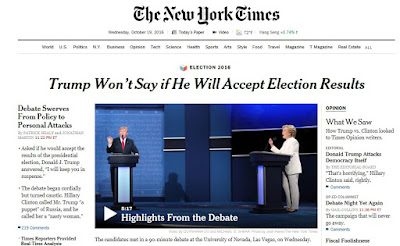 
I watched the bulk of the debate on my computer on CSPAN's website -- the usual subscription aspect was dropped for the debate -- and then hurried over to Floriana to Dito's Bar to watch the remainder there amid a crowd of people (mostly gay men totally for Hillary). In all, I missed about 12 minutes of the debate. (It is estimated 71 million people across the U.S. watched it versus 84 million for the first debate and 66.5 million for the second one.) 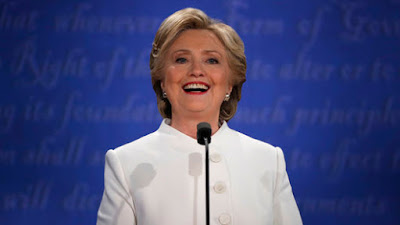 The Madame deftly handles things at the third and final debate with the Narcissistic Madman.
*******


I intend to write more about this on Saturday evening -- especially since I have an entry already partially composed that I wrote last night. The bottom line is that Hillary is deservedly in a very strong position and there is no reason to think she won't win, but Trump is as dangerous as he is a vulgar buffoon, and some of his followers potentially are real trouble, at least in places. And the political climate will remain toxic even if she sweeps to electoral victory. As for the debate, I do agree that Chris Wallace was a very good moderator. 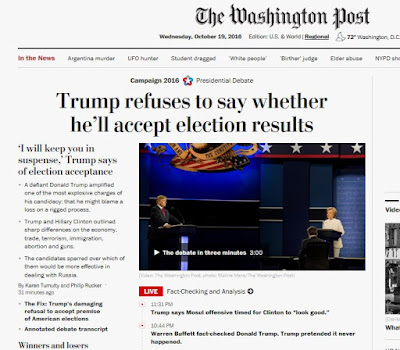 
Turning to the weather, it has been nonstop shitty and hot and too dry with dew points way above what they should be this time of year (65F to 70F range). Indeed, Dulles Airport (KIAD) had four consecutive days of record high temperatures -- 84F, 85F, 87F, and 83F (the 20th daily record was a tie) -- and I believe there were some record high lows at KBWI and perhaps KDCA (not sure about that).
Speaking of record highs, this CWG entry features the results of an analysis by Justin Grieser of record high and record low temperatures for Washington, D.C., that reveals the incredibly lopsided nature of their ratio for the first six years of this decade. I'd like to repost this entry in its entirety, but I'm not going to do that right now. 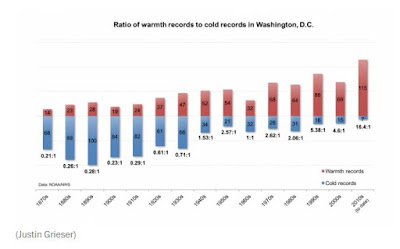 From the CWG entry linked above, a plot of the ratio of warmth and cold records for Washington, D.C., by decade 1870s - 2010s.
True, the way this is done causes multiple counting of record temperature ties in subsequent decades, but it works for both warm and cold records, so the takeaway message is the same.
*******


I will note that weather-wise, a strong cold front with upper level trough is approaching the East Coast and while tomorrow may flirt with 80F again -- hopefully, the last time for this season -- Saturday is forecasted to be gusty and blustery with highs only in the 55F to 60F range. Hopefully, there will be some decent rain but there looks to be a big gradient with the I-95 Corridor not getting that much, which is bad.
It is forecasted to be rather windy -- indeed, it is starting to get breezy tonight with a southerly flow. 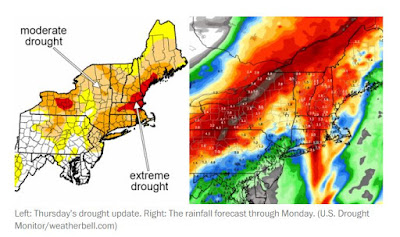 A recent U.S. Drought Monitor map (without legend) for the northeastern quadrant of the U.S. along with NWS NDFD rainfall forecast between Oct. 21 and 24, 2016 for the same region.
This is taken from this CWG entry.
*******


As the above image shows, parts of the Metro D.C. area are in a borderline drought -- or rather, "abnormally dry" (yellow shading), while parts of New England and the New York City area are in an outright drought. The leaves are falling from the trees but with little, so far, in the way of a colorful autumnal display.
The dry pattern will reestablish itself for next week. We really need go to into a wet pattern.
OK, that's all for now. 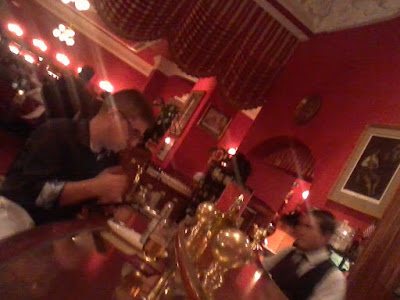 The interior of Taberna del Alabardero restaurant, Washington, D.C., 7:06PM October 19, 2016.
I discovered this restaurant by chance after leaving work on Wednesday. Intending to go to The Bottom Line for a bit of dinner and a drink, I got off the wrong side of Farragut West Metro station and saw this place. I quite liked it -- especially the buttery shrimp "casserole" dish and white wine I had. I sat at the small bar and the bartender / server, Renee, was terrific.
*******


Part of the issue tonight of why I can't post a more complete entry is that for tomorrow, although I don't have to go to DOE HQ and so I can go in late if I like, I nevertheless have to make major progress on a vexing task that needs to be wrapped up by Monday morning (and I doubt I'll work on it over the weekend no matter what I tell myself).
Also, a stove repair guy is supposed to come tomorrow morning (the building manager arranged it) to look at my still-relatively new stove because two of the natural gas-fired burners -- which are supposed to automatically start when you turn the dial -- are not working. 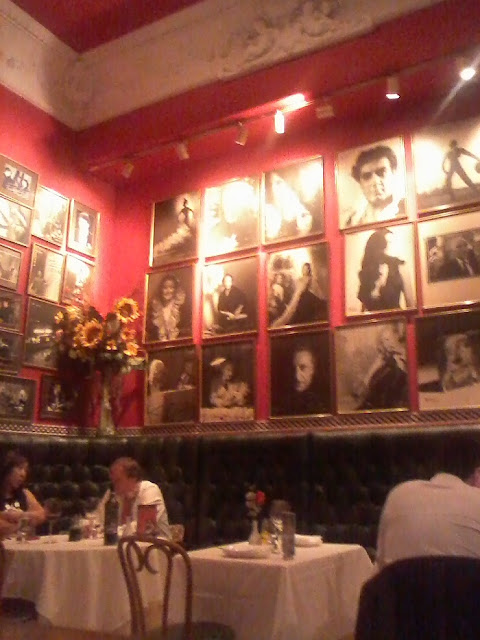 
For tomorrow evening, I'm either going to meet Kevin after work in Penn Quarter or Fred at Annie's. My next planned postings will be Saturday night after my gym / laundry routine but before going out and this should include a Jukebox Saturday Night edition (although I don't have any songs as of now to post).
Sunday is my ostensible free day -- assuming I get up before, oh, 2PM ... 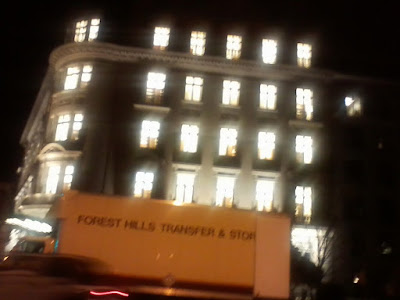 The ornate Beaux-Arts-style Andrew Mellon Building at 18th St and Massachusetts Ave NW, Washington, D.C., 8:09PM October 19, 2016.
It has been undergoing a major renovation -- and, apparently, is soon to house one of your garden-variety, foundation-funded, corporate oligarchical-whoring rightwing D.C. think tanks (namely, AEI). As an aside, the geometric design framing the main entrance looks like a series of interlocking reverse Swastikas. Just sayin' ...
*******


Oh, yes, at this point, my trip to see my father ahead of / during Thanksgiving down in his trailer in Atlantic coastal northcentral Florida is probably off. I just can't handle him and have too much antipathy toward his nowadays.
This is much too much to go into now, so I'll just leave it at that. I'll just visit my mom instead and visit Quill's family, if that's an option this year.
OK, that really is all for now.
--Regulus
Posted by Regulus at 2:17 AM