NWS CONUS Great Lakes sector composite radar mosaic looped 0758 UTC - 0908UTC (3:58AM EDT - 5:08AM EDT), Sept. 28, 2016.
At this time of the day, ground clutter abounds on radars, but you can still see the spiraling upper level low that is dropping toward the mid-Atlantic region. There are also thunderstorms just south / southwest of the immediate D.C. area.
*******


Apologies for failure to post planned comprehensive update on Tuesday night. It was a non-gym night but I vowed I would just come home after a quick after-work drink.
Instead, I went to Floriana, where I had a rather nice time -- especially in the wake of Hillary's excellent debate performance side-by-side with Donald Trump's widely acknowledged mostly disastrous one, a topic I had intended to write about in detail* -- but I ended up staying longer than I planned. 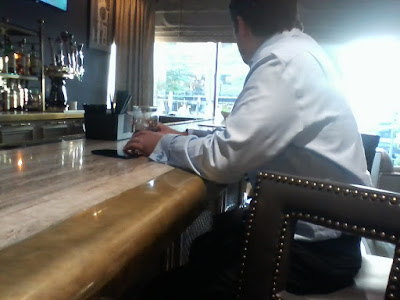 The Postscript bar located in the Loews Madison hotel, Washington, D.C., 7:56PM Sept. 27, 2016.
I stopped there after work for a drink. (I actually stopped at the Post Pub initially, but it was so unpleasant that I just left.) This place was kind of pleasant and it has a nice little happy hour menu.
*******


It is a gray, mild, murky pre-dawn early morning here in D.C. The forecast calls for a period of heavy rainfall -- something we haven't had in months -- and there is a flash flood watch in effect for the entire Baltimore/Washington for Thursday and Friday.


By the time I walked home, I just went straight to bed. I'm up now -- at almost the 6AM hour -- but I'm going back to bed until 730AM.
*Whether it changes the polls -- and the American voting public minds presumably behind those numbers -- well, that's another matter. As for the reflexively virulently anti-Hillary media-whore narrative, it seems to have changed a bit in the past week with the dawning realization that Donald Trump could actually win.
Tonight is also a non-gym night and I might be meeting Kevin, so again there might not be an entry. My next gym night is Thursday and I intend to post an entry thereafter. 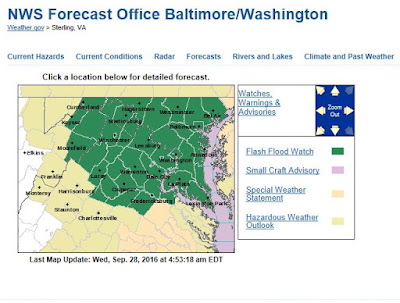 
The NWS point-grid forecast has between 4 and 7 inches of rainfall forecasted for the next 36 hours, which would beat the total rainfall we've had for the past several months combined. We'll see if that actually happens. These big would-be big weather events in D.C. often turn out to be big busts.
Here is a CWG entry on it.
OK, that's all for now. Again, my next entry likely won't be until Thursday night.
--Regulus
Posted by Regulus at 5:54 AM