Friday evening at the start of the Labor Day holiday weekend.

Time for Paul Ryan to send out a tweet about all the Ayn Rand fevered fantasized supermen off of whom the rest of the planet exists parasitically.
This entry is mostly just a weather-related to one to say that we are not likely to get diddly-squat here in the immediate D.C. area from that Tropical Storm Hermine -- which came ashore near St. Marks / Port Leon, Fla., around 1:30AM EDT this morning as a category 1 hurricane with maximum sustained winds of 80MPH and has been spiraling its way across Georgia into South Carolina.


There is a report of 1 storm-related fatality (a homeless man in Marion County, Fla., sleeping outside in a tent struck by a falling tree branch) as well as coastal flooding, some structural damage, and widespread power outages in the Florida panhandle -- not to mention the reports that large numbers of birds got caught in Hermine's eye (based upon radar images).


The model guidance suggests the tropical storm will still be blocked by a high pressure block to its northeast, but it won't be over the mouth of the Chesapeake Bay but about 200 to 300 miles to the east northeast of that off the Delmarva / New Jersey coastline.
This is a notable change from the forecasts on Wednesday and that I wrote about here. Naturally and OF COURSE, whatever I wanted turned to crap. (Yes, I wanted a stormy day here.)


There is still a 30 to 40 POP for showers on Saturday into early Monday for the D.C. area, but my guess is that there will either be totally dry with nothing here (by far the most likely scenario) or it will be wet and windy. This is because the low will either remain offshore -- stalled for about 48 hours -- or be pushed by the high pressure block to the northeast of it back into the coast.
However, that latter scenario seems unlikely, especially since it would have to be a high pressure doing it rather than a Sandy-like capture by an synoptic-scale extratropical system.

Moody Air Force Base (VAX) NWS radar in standard base mode reflectivity looped from 8:33AM to 9:21AM EDT September 1, 2016.
Not to worry -- the tax-exempt mega-churches in Metro Atlanta all stayed dry. The trailer parks in Valdosta did not.
*******


Right now -- as of the 5PM NHC update -- the storm is centered at 33.0N 80.5W or 30 miles WNW of Charleston, S.C., and is moving to the northeast at 20MPH. Central pressure is 993mb and top sustained winds are 50MPH. It should start slow down significantly but the track will continue to be to the NE and possible ENE before it moves on a more northerly trajectory and meanders for a few days off the mid-Atlantic coastline. 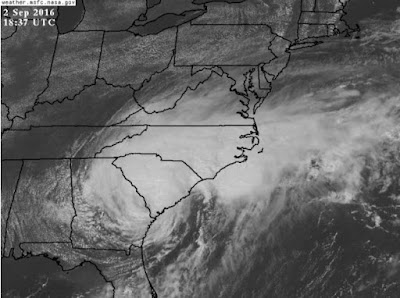 
The CWG continues to have multiple entries -- none of which I am linking to -- about how deadly dangerous it will be to visit the seashore this weekend because of what amounts to late summertime nor'easter (albeit with tropical / hybrid characteristics), but it and the NWS are also touting the fact that we might get nothing here in D.C., which of course is just what the D.C. area bourgeoisie want. 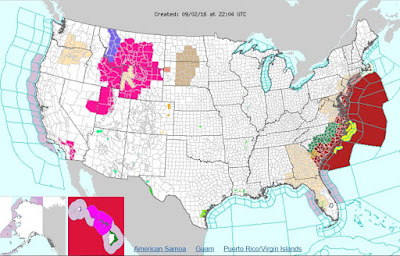 NWS advisories updated 2204UTC (6:04PM EDT) September 2, 2016.
This image does not include the color-coded legend. There is a tropical storm warning in effect for the lower (Virginia) portion of the Chesapeake Bay.
*******


I'm odd man out on that one in the stupid comment section.
This whole damn thing has been very distracting the past few days. Anyway, after the storm passes, it's just going to get warm again and we will resume our overheated summer, September-style. 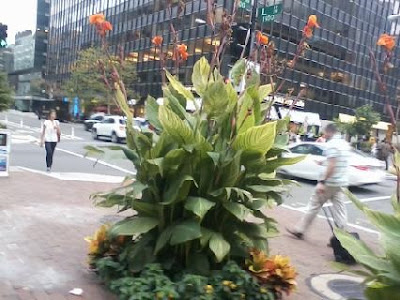 
Yesterday after work (a non-gym night), I went with Andrea to Black Rooster. We were originally going to go to Amendment 21 -- which is the bar / restaurant associated with the Holiday Inn in SW D.C. near L'Enfant Plaza -- but it was too damn crowded. Everything is always too damn crowded. Ditto the bar at Vie de France at 600 Maryland Ave SW. So instead we took the Metro to Farragut West and went to Black Rooster, which was not crowded and instead was kind of dark, cool, and pleasant.
As for Andrea, I won't see her for nearly 4 weeks as she and Imara are going to Greece (including a week tour of the Greek isles), Istanbul, and Italy (including Rome and somewhere in the countryside for a friend's wedding). 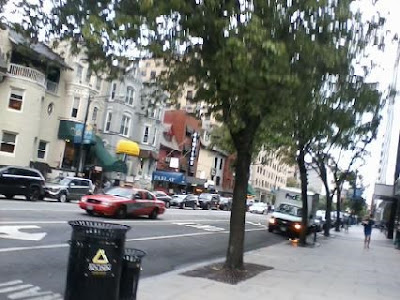 
Thereafter, I went to Daily Grill at 18th and M Street NW -- a place I had not gone in a couple years -- and had a nice chat with a lady named [C] who intends (and not in a crazy way) to run for At Large City Council member as the first-ever black female Republican in the history of the District of Columbia. (I'm not going to write out her name in the interest of her privacy given what she told me.) 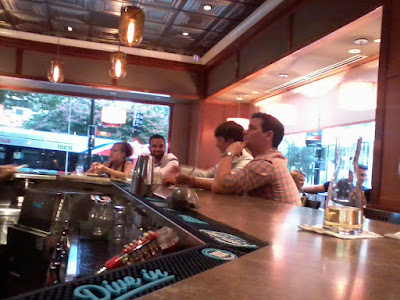 
Thereafter, I went to Local 16, where I met my neighbor friend Fred. I haven't gone there much lately -- ever since my unwise friendship with Uncle Fester flamed out, itself a prelude to the implosion the whole Larry's Trap House / Opium Den / Gay Boozer Lounge thing. The general manager was working there and he said he hadn't seen Uncle Fester in a long time.
Anyway, I got home around 1030PM and to bed around midnight, whereupon I slept in dream-filled fits and starts to about 8AM. I got into work about my usual time and, again, I was not as productive as I should have been. 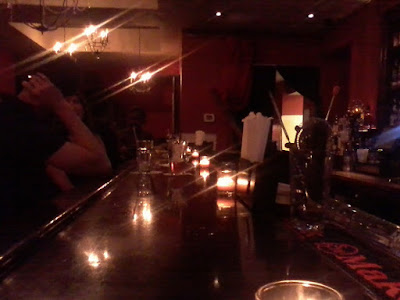 
I'm supposed to meet Fred again this evening -- at Annie's, although I don't particularly like that place. (Maybe I'll get kicked out of there and it will be -- to quote Donald Trump -- beautiful.) I'll probably go to Floriana after that.
OK, I'm just going to end this entry now. Tomorrow (Saturday) afternoon is a gym day. For Sunday, I'm supposed to go to Quill's parents' house in Silver Spring for dinner. I also have off Monday, and I intend just to take a walk or something like that.
Oh, yes, I should mention that my mom and Ray met Ray's two grandchildren today as they and their father -- Ray's daughter's ex-husband and their mother -- were passing through Maryland from Pennsylvania on the way back to South Texas. I mentioned this topic in my previous entry. 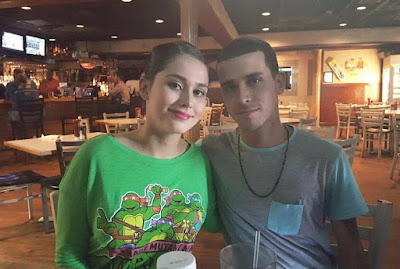 This is "LT" and "FT" -- brother and sister and Ray's 20-something grandchildren that he had never before met. And my mom is a step-grandmother. This was taken at Hellas restaurant in Millersville, Md., earlier this afternoon.
As I mentioned, this makes me their step-uncle. Strange thought that.
*******


OK, that's all for now. I intend to update the blog tomorrow with at least a jukebox Saturday night entry.
--Regulus
Posted by Regulus at 7:24 PM