Sci-Fi Author Kim Stanley Robinson Discusses His Novel Aurora; Link to His Essay "What Will It Take for Humans to Colonize the Milky Way?"

This is not an update of any sort. Rather, I want to post this YouTube clip featuring a short talk by the excellent (and still very much living) sci-fi writer Kim Stanley Robinson ...
In it, Robinson discusses the motivation of -- and what it would take technologically to realize the vision of -- his 2015 novel Aurora.
For an overview of Aurora, here is the Wikipedia article on it: Aurora (novel). 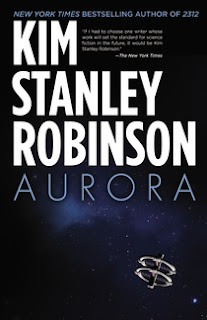 As excerpted from this article, the novel is about humanity's first attempt to colonize another star system in the form of a generation ship that travels to the Sun-like star Tau Ceti located about 12 light years from Earth.

Launched from Saturn in 2545, the generation ship consists of 24 self-contained biomes and an average population of 2,000 people.


After 160 years and about 7 generations -- not to mention ongoing decay of the ship's infrastructure and internal ecology -- the ship approaches Tau Ceti and undertakes a colonization effort of an Earth-analog moon of one of Tau Ceti e.
Things go quite badly and the ship ends up returning to Earth.

A hypothetical Earth-like planet orbiting Tau Ceti, a very Sun-like star with a somewhat smaller mass.
For a series of other stars, see this entry that I posted in March 2015. (The idea that these would be Earth-like is quite unrealistic, especially at the close distances posited.)
******* 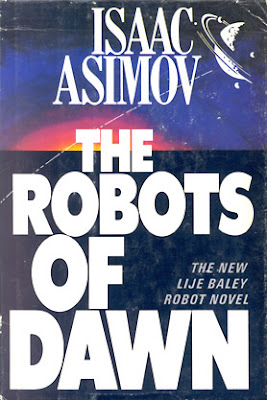 The name "Aurora" a nod to one of the planets in the Robot series by truly great Isaac Asimov, one of the giants of 20th Century science fiction. Indeed, Robinson's Aurora and Asimov's Aurora both orbit the star Tau Ceti.

The first edition Doubleday cover of The Robots of Dawn, one of the Robot series published in 1983.


(In the above video, Robinson refers to Aurora in The Naked Sun, one of the original 1950s novels in the Robot series.)
As for Robinson, he wrote an essay on this topic back in January that appeared in Scientific American (link embedded): What Will It Take for Humans to Colonize the Milky Way?
*******


OK, that's all for now. I'm back from the gym -- where I was able to go a full hour earlier than usual as I got to work a full 2 hours earlier than usual -- and made dinner and created a new spreadsheet for the upcoming pay period (Friday is payday).
I need to go to bed as I have to be back again at DOE HQ by 915AM-ish tomorrow. I'm going to the National Press Club with a friend afterward and then to Trade and/or Floriana. My next planned entry will be on Saturday evening.
--Regulus