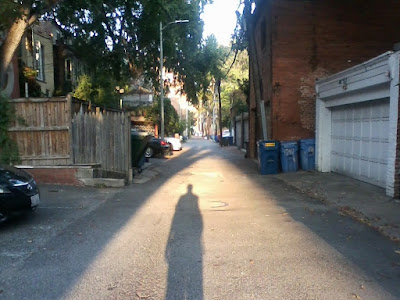 
This is just a brief update.
I went to the gym this afternoon into early evening and had my standard multi-part workout. I also just finished three loads of laundry. For tonight, I'm meeting Kevin -- the acquaintance of mine that I met by chance at Tony & Joe's in Georgetown on Labor Day -- at Old Ebbitt Grill.
For tomorrow, I really don't have any plans -- just a Metro ride and a walk with a stop here or there. Yesterday, I left work a bit early with my co-worker Matt and we went to Cuba Libre where we had a nice time, although he had to get back up to Gaithersburg where he lives with his wife and two young children. (I like Cuba Libre with its airy, dark coolness, especially when it is hot and disgusting outside as it was yesterday.)
Thereafter, I went to Annie's, where I met my neighbor and friend Fred and then I went to Floriana, although things got a bit fuzzy at that point. I walked home by around midnight. 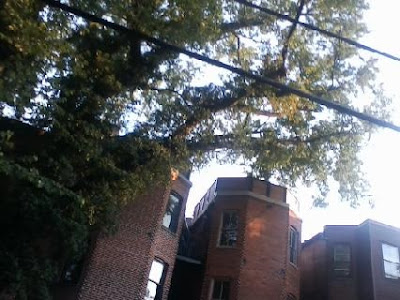 
The weather continues to horribly shitty hot with temperatures again in the mid-90s Fahrenheit for highs and lows at or above previous record max minimums. I'm sick of this frickin' summer and just want cool AND wet weather.
A front is supposed to move through by tomorrow morning but moisture is somewhat lacking so we might not get any needed rainfall at all across the Metro D.C. and Baltimore areas. There is a 20PoP for tonight, but that's worthless.
Tomorrow, temps should be around 85F for highs.
Apropos of nothing except I found this an noteworthy news item ...
A mattress store in San Antonio, Texas called Miracle Mattress created an ad -- aptly described in this Huffington Post headline as "absurdly offensive" -- announcing a big sale to commemorate the 15th anniversary of the 9/11 attacks. The ad ran only very briefly and was taken down -- unsure if it was aired on local San Antonio TV or online media -- but here is the 20-second spot:
Wow. I'm not sure how to respond to this.

On one level, it's hilarious slapstick, but on so many other levels, it is profoundly offensive and horrendously disrespectful to all the victims who died on that horrific day. Having a little American flag atop one of the two mattress "towers" just ads to the offensiveness.
Apparently, the store is now "closed indefinitely" -- or at least through the 15th anniversary commemorations of the 9/11 attacks -- as stated in a very apologetic letter from the store owner, Mike Bonanno. The ad features the store manager, Cherise Bonanno-- who has the same last name as the store owner and I assume they are related -- and two store employees.
The YouTube post by Jamie Barrientos, a San Antonio marketing expert who flagged the ad, has already had 5.8 million views (and steadily climbing).
OK, that's all for now. My next entry will be Monday night / early Tuesday. Jukebox Saturday Night entry to follow momentarily.
--Regulus
Posted by Regulus at 9:43 PM