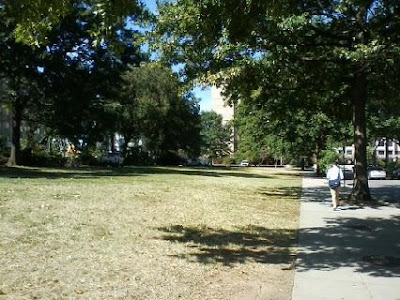 
This entry is a reworking and expansion of what I wrote on Monday night.
I'm now starting to think that Donald Trump is indeed going to pull off a victory in the November presidential election. Hillary Clinton is simply too unpopular with too many people. She does not generate any enthusiasm except among a relatively small subset of the voting population (yes, that includes yours truly), and instead, sizable groups of people -- including progressive-minded millennials -- dislike or even hate her. 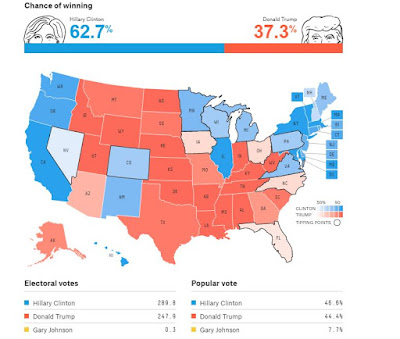 FiveThirtyEight.com Hillary Clinton and Donald Trump odds of winning electoral map (shaded) in the current polls plus forecast model, September 14, 2016.
(There is also "polls only" and "now-cast" models. Previously, I had been showing the "polls only" forecast, since that the default page.)
*******


Hillary's trend line has been slowly but relentlessly down throughout August and into September, and given the nature of the man she is up against -- 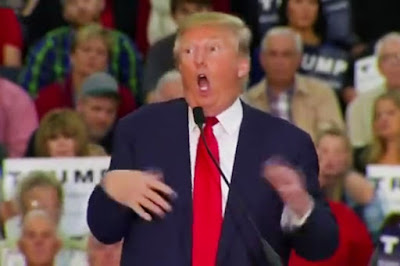 -- a quasi-authoritarian lunatic and pathological liar steeped in all manner of corruption and deeply shady dealings domestic AND foreign who hasn't the slightest inkling of how to govern and who is horrendously and dangerously unqualified to be President of the United States, this is incredibly worrisome.
Conversely, perversely, the only reason she is not farther behind is precisely because it is Donald Trump.


To be clear, I do in fact subscribe to the view that a significant part of the reason Hillary is so hated is because the political media -- and mainstream media in general -- are wildly against her and have been (in cahoots with the right) for much of the past quarter century since her arrival on the national scene in 1992. 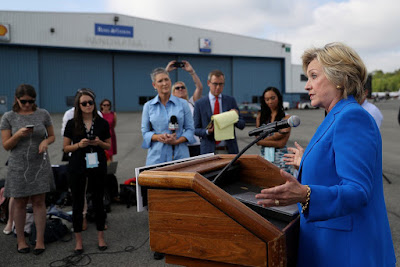 That is, it's more than just because of the false equivalence strictures that have been the subject of interesting observations by both Jonathan Chait and Brian Beutler. As is often the case, I subscribe to what my man Paul Krugman says, in this case, in this piece (link embedded): Why Are the Media Objectively Pro-Trump?
As for the idiot public and its general leanings and level of intellect, just check out the comment section of any news article on ANY topic. 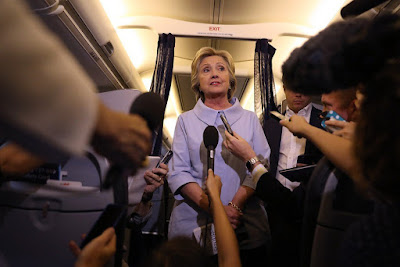 And let's run with the nightmare scenario laid out so well by Republican (but readable) New York Times pundit Ross Douthat (link embedded): How Trump Might Win.
In my own problematic (Gnostic-leaning) theology, given the viciousness and spitefulness with which GOD runs this particular Universe -- in the larger Multiverse -- I could see these scenarios happening.
Oh, and compounding this, Nate Cohn explains why that whole stupid "Emerging Democratic Majority" demographic argument is unlikely to help Hillary meaningfully in 2016. 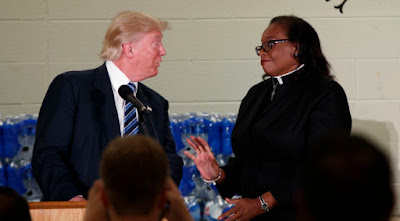 Rev. Faith Green Timmons interrupts Donald Trump at her church in Flint, Mich., after Trump breaks his invitation pledge to talk only about Flint's war crisis and what the church has done and starts making a political speech, Sept. 14, 2016.
What a jackass. Story here.
*******


Having said all that, let me be clear that any country that elects him -- even if just by a plurality -- truly gets what it deserves in terms of the disastrous, indeed, catastrophic outcomes likely. The hardest part will be the first two years when the GOP has complete control and abolishes the Senate filibuster, allowing it to be rightwing and corporate oligarch field day.
Of course, if HRC wins, it will be the political equivalent of grinding World War I-style trench warfare with, most likely, at best a stalemated solution -- and no guarantee she wins reelection in 2020.
From Monday (updated somewhat) ... 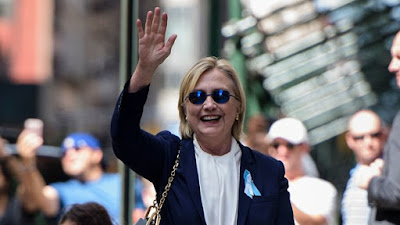 Hillary Clinton in New York City, Sept. 11, 2016 following her taking ill at the 9/11 commemoration ceremony and a brief stint at her daughter Chelsea's apartment.
*******


So as everyone knows by now, Hillary Clinton has pneumonia -- and it came out in a rather unnerving way in the form of someone's Smartphone footage showing her buckling and nearly collapsing as she was helped into a waiting vehicle after abruptly leaving a 9/11 15th anniversary commemoration on Sunday morning in Lower Manhattan.
Smartphone footage of Hillary Clinton having to be helped by her Secret Service detail into a waiting van, New York, Sept. 11, 2016.
*******


The mainstream whore-media -- who are thrilled with everything that Donald Trump does -- can't get enough of the new story line that she is 5 minutes from death and should release all her health records including those already released (as in, re-release them, whatever that would entail). 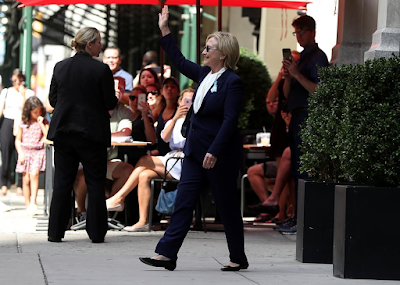 
On the Lunatic Right -- which encompasses what was once the mainstream Republican Party, as well as the nebulous virtual hate group known as the Alt-Right and the larger GOP Media/Entertainment Complex -- there is orgiastic glee at all of this, although there has been hyperventilating about her "near death" health for the past few months.

The health conspiracy theories have been metastasizing faster than a Coast to Coast AM online chatroom. This includes stories of body doubles, secret doctors, having been poisoned, and all manner of illnesses up to and including HIV.


The D.C. pundit class can't get enough of it and the Post editorial board had some stupid "bipartisan-nuanced" unsigned editorial -- likely penned by "Uncle" Fred Hiatt or Ruth "Mother" Marcus. 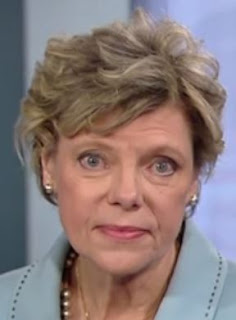 Apparently, Cokie "The Rhymes-With-Witch" Roberts was salivating on NPR the other day about how "Democratic operatives" and "top officials" are "fretting" and "worrying" and "plotting" how to remove her from the ticket because she is 2 minutes from death.

Cokie Roberts is precisely why I stopped listening to NPR many years ago.


Cokie Roberts is Sally Quinn's idea of Profound Insight and Fred Hiatt, no doubt, has her on speed dial. 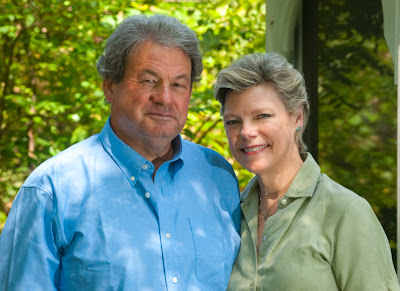 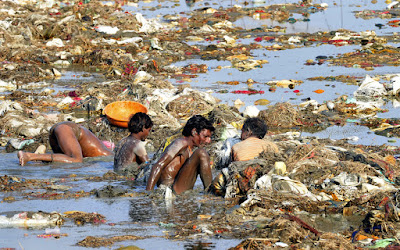 Cokie Roberts' conventional wisdom and the waters of the Ganges: equally good for you.
*******


Prior to this, the ginned-up scandal-of-the-moment was Hillary Clinton's totally-apt description of "about half" of Donald Trump's supporters as a "basket of deplorables."
Donald Trump, of course, is never held to anything remotely approaching the standards that Hillary is held. 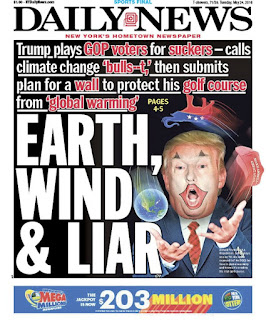 To the extent there is negative coverage of him -- it is simply overwhelmed and lost in a vast and storm-tossed sea of his sociopathic lies and awesome ability to play the media, break all established norms of a political campaign, and just "power through" (to use the phrase of the moment) with lie after lie after lie.


As Vox.com's Matthew Yglesias noted here and here, Trump has successfully exhausted the whole system's ability to be shocked and instead we're just all numb to the Trump juggernaut (even as the mainstream media still tries to follow the dangerously outmoded "both sides" false equivalence framework through which they see the world. 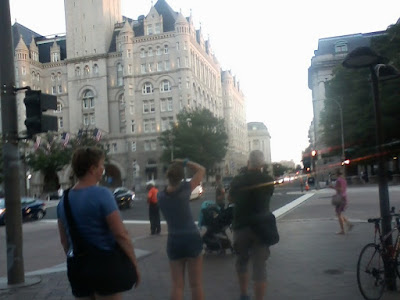 
Speaking of that false equivalence, the public editor (i.e., ombudsman), Liz Spayd of the Flagship of the Mainstream Media -- the Grey Lady herself, the New York Times, wrote and especially stupid piece defending the false equivalence framework. Jonathan Chait offers a definitive take-down. 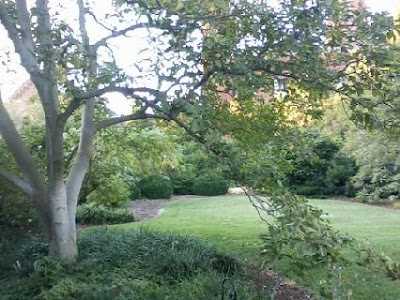 
At this point, if Trump is able to win the election with, say, a Ross Douthat 44 percent plurality or some Electoral College deadlock that throws it to the crazy and worthless House of Representatives, it really will be cataclysmic the outcome and all I can do is sit back and watch -- blog -- the Trumpocalypse show. If he genuinely wins (with a plurality), then I the country gets what it deserves. 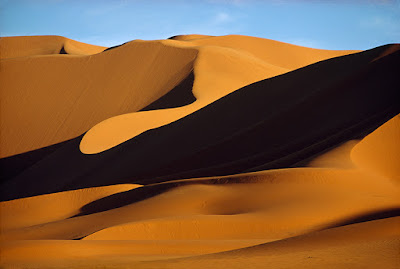 Sand dunes, Erg Bourarhet, Algeria, 1973.
As for the weather, it continues to be too damn hot and way too damn dry. Today (Wednesday, Sept. 14th) featured a daily record high at KDCA of 95F while KBWI and KIAD both reached 93F (neither were a daily record high). A decent cold front is forecasted to cross the region tonight -- but to do so mostly, if not entirely, dry. Another big warm up is likely for next week with more 90F+ days and little rain as the anomalous area of elevated geopotential heights sets up over the eastern U.S. for the umpteenth time. 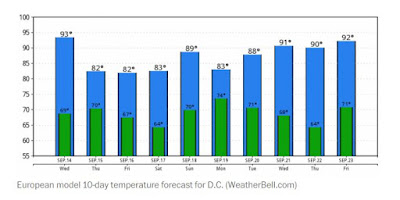 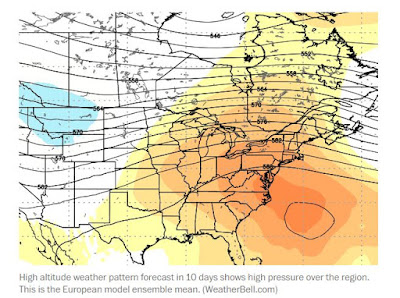 
Turning to the climate, to no one's surprise -- except inside the GOP Bubble, where facts such as this don't even enter -- August 2016 was ANOTHER record hot month. In fact, it tied July 2016 for the hottest month on record of any month (since it is Northern Hemisphere summer, which dominates in that sense). 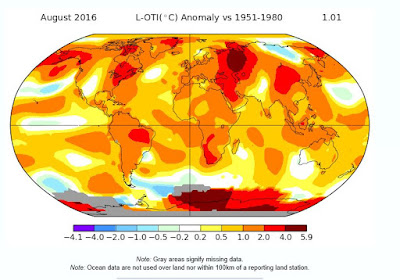 
Here are the recent records as reported by NASA (taken from the New York Times article on it):


• August and July are now the hottest months on record.
• Every month since October 2015 has set a new monthly high-temperature record.
• The first six months of this year beat 2015 for the hottest half-year ever recorded.
• Both 2014 and 2015 set new heat records, and 2016 is on pace to continue the trend.
For a more in-depth coverage, here is the NASA GISS overview. 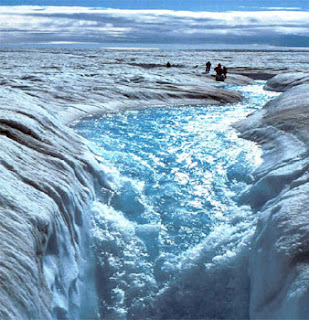 Sigh. Somebody call George Will.

At this rate, at some point in the not too distant future, Greenland massive ice sheet is going to have a catastrophic breakup.


I have to be onsite at DOE HQ by 9AM. Tomorrow (Thursday) night is also a gym night. I probably will not post an update -- or if I do, only a brief weather one -- tomorrow (Thursday) night. Friday night also looks iffy for updates as I might be going to with a co-worker friend to the National Press Club. In that case, my next entry will not be until Saturday.
--Regulus
Posted by Regulus at 12:14 AM