Not Istanbul, Nor Constantinople -- Nor the Blog Entry I Planned; Rather, Just a Brief Update (With Free Carpool Karaoke and Welcome Rain) 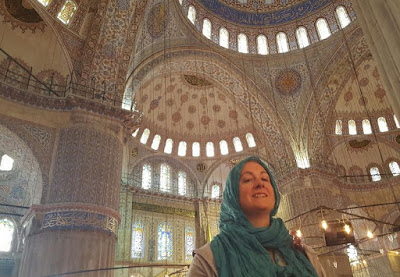 A very nice picture of my very good friend Andrea in Istanbul's Blue Mosque taken on Sept. 24, 2016.
Andrea and Imara are back from their whirlwind three-week Mediterranean basin visit that took them from the Greek isles to the Amalfi coast of Italy to Istanbul.
*******


OK, once again, I started an entry -- a political-themed one involving the presidential campaign and remarks on the debate which I expressly did NOT watch tonight -- but it is already 12:15AM and there is no way I can post that entry before, say, 2AM, and more likely 230AM -- something I am not going to do given that I have to get up early and be onsite at DOE no later than 930AM. 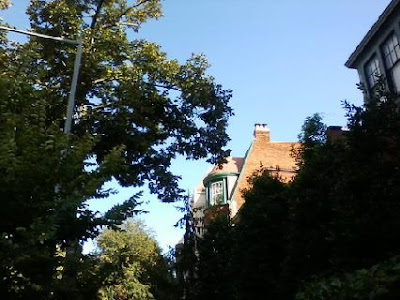 
In the meantime, here is a very enjoyable and funny edition of "Carpool Karaoke with James Corden" from his show The Late Late Show with James Corden.
This one features Chris Martin, lead singer for Coldplay -- whose song Viva la Vida I featured in my most recent Jukebox Saturday Night edition. This edition was filmed earlier this year on the occasion of Coldplay performing at the Super Bowl ("opening" for Beyoncé).
As an update, I'm back from the gym after a decent multi-part workout ending in a swim. Actually, the weightlifting was fairly good and I've definitely noticed some results. (No, not Results. I go to the YMCA.)
My next planned gym night is on Thursday. I should note that I am going to throttle back the going-out-during-the-week after work but that routine is just not working for me. 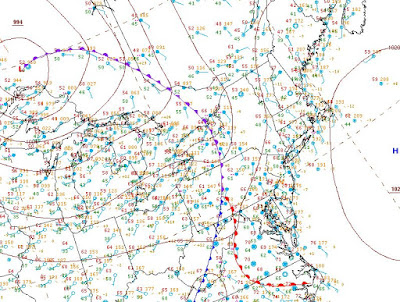 
Turning to the weather, tonight features some scattered needed rain showers ahead of a cold frontal passage. KDCA recorded 0.12" so far (the most of the four regional climate stations.) The front is forecasted to stall just south of the D.C. area tomorrow.


By Wednesday, a cut-off low is forecasted to settle over the area and potentially induce cyclogenesis over the region, leading to a prolonged period of showery, cool weather -- which is perfectly fine with me if it indeed happens.
OK, that's all for now. I'll try to post what I had intended to post tonight, but I'm not sure. (It is rather vituperative.)
Headin' to beddin' and dream land ...