The Last of My Hit Parade of Failed Friendships: A Synopsis; Tales from the Crow-Bar; Update on that Unstoppable French Gymnast 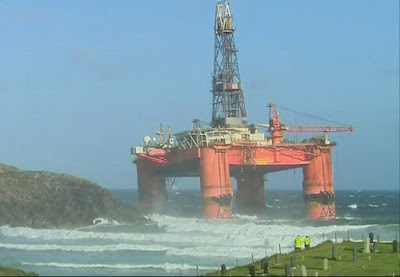 Unexpected visitor: The 17,000-metric ton oil drilling rig Transocean Winner comes ashore at Dalmore Beach on Scotland's Isle of Lewis as a result of a powerful storm that caused it to detach from the tugboat that was towing it from Norway to Malta.
At this point, it's unknown what ecological affects the rig might cause but the beach has been blocked off by authorities as they try to assess the situation. BBC story here. But just think about -- to borrow a phrase -- the gargantuan might of the sea to move this thing like that.
******* 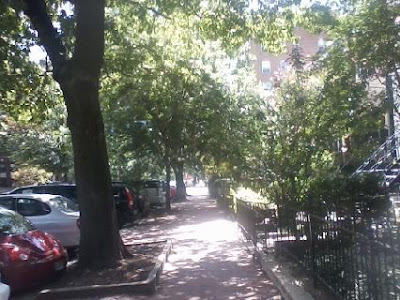 
Late night -- already after midnight -- as I put together this entry.
I'm back from the gym where I had a decent multi-part workout ending with a swim and then came home and made dinner. I'd like to try to get into work earlier tomorrow, although I will probably stay later anyone since tomorrow night is a non-gym night. 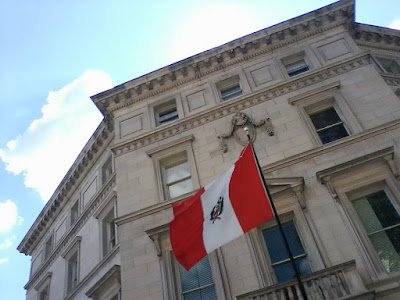 
So despite what I wrote in my previous entry about the weather, it was actually a variably-to-mostly cloudy day rather than blazing sunshine, although it cleared up by sunset. There was actually a band of persistent rain showers elongated east-to-west across central and southern Virginia from late morning into the afternoon due to a quasi-stationary frontal boundary and -- I would imagine -- any minor impulse(s) moving along it.
Nevertheless, predictably, we didn't get any rain in the frickin' D.C. area, of course. It reached 92F at shitty KDCA, 89F at KBWI, and 88F at KIAD. 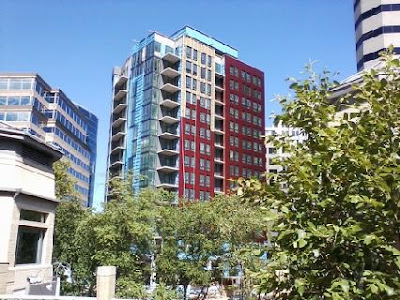 A building nears completion, downtown Bethesda, Md., 3:38PM August 7, 2016.
To be clear, Bethesda is not an incorporated city -- just a CDP in Montgomery County. I quite like Bethesda with its mix of nice residential, urban, and livable -- not to mention relatively safe.
*******


Regarding that previous entry, I inadvertently omitted a key word -- since corrected -- in describing my weekend: It was a crummy weekend overall.
As for the Kristof (his actual name is "Krzysztof"] situation, this is the final failed friendship to end and follows a string of them from Gary to Jamie to the Hysterical One to, earlier, Wall-P and his awful crowd. Below is a little bit of history about how it came to end. 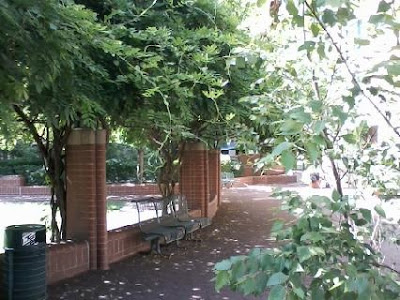 
My friendship with Kristof began in late 2002 when I was working at Goddard in Greenbelt and we would take the bus together from the Greenbelt Metro station and we both returned to D.C. Kristof was quite fun with his upbeat and gregarious attitude -- and the fact that he was from Poland made it quite startling to me since, honestly, as SI told him many times, prior to meeting him, I never knew that Polish people could be happy. (My mom's side of the family are entirely ethnic Polish. My dad's side are ethnic Italian.)
In those days, we hung out at all kinds of bars from Larry's Lounge --long before the current management and cast of characters were there -- to JRs and even the old DC Omega. At some point, this straight guy had "become" totally gay and he was subsequently to easily co-opted all of my friends, acquaintances, and places where I used to hang out -- and he never looked back, especially once he got his first boyfriend. (Oh, and yes if you are wondering about a certain question involving him and me.) 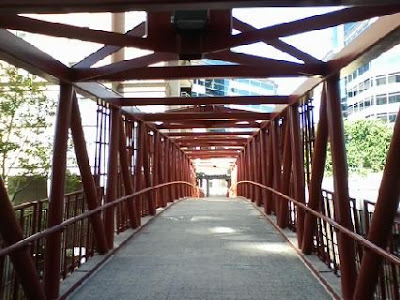 
During all those years of trouble I had between early 2004 and spring 2010, my friendship with him slowly but steadily soured and his attitude gradually changed toward me. Due to complications with his immigration status (with which I tried to help him), there was also a period of about 15 months starting in March 2009 during which that Kristof was back in Europe -- first at home in Poland and subsequently working as a scientist in London. (Kristof is one of the top scientists in his atmospheric sciences field. Seriously.)
After this return and following a few other ugly end-of-night episodes that were, of course, all my fault, the final end was in June 2013 in a disastrous dinner party involving some things I said to his boyfriend about another guy / then-romantic interest THAT, FWIW, KRISTOF EARLIER THAT NIGHT ASKED ME TO SAY (it went badly). Yes, upon reflection, I understand that was stupid to do it. 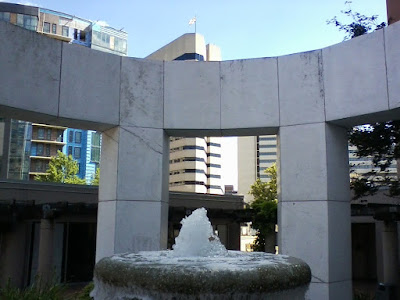 A small, bubbly fountain in downtown Bethesda, Md., 3:40PM August 7, 2016.
This little fountain seemed to have detergent of some sort it in or heavily chlorinated water.
*******


Well, by last weekend, I had enough of his never contacting me -- never mind asking me how I'm doing -- and endless string of rejections about meeting. I don't need that and I'm now just glad to jettison yet another failed friendship. He can join the rest of Your My Hit Parade -- or is it Jackie Gleason's Cavalcade?? - of ex-and-former friends that I want less than zero to do with any longer.
Besides, both he and Gary were there that long-ago night in May 2004 with the ugly M. WADE Tipamillyun episode and both couldn't have been more useless during or after and -- I suspect -- maybe even happy it happened. If so, then that now makes three of us.
(I never thought I'd reach that point, but there it is.) 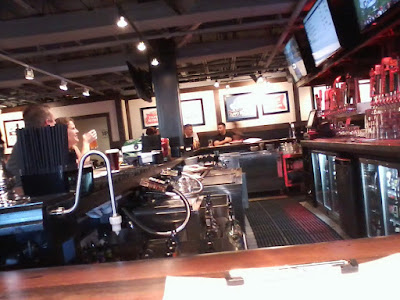 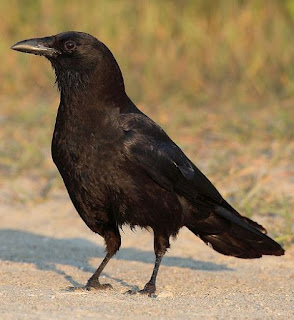 Oh, by the way, I saw M. WADE Tipamillyun's Beloved Crow cawing and flapping its skinny wings -- feathers flying -- on a sunny Sunday 17th Street at Gayborhood Ground Zero around a bunch of other 20-and-30-something, personality-free gay sorority boys.


As for the Crow, I hear it is ruffling other feathers in the insular bubble of the D.C. Gayborhood by issuing weird threats -- on social media and, most likely, in the usual grammatically and syntactically maladroit and malapropped ways -- that anyone on its bar's sponsored gay kickball league who attempts to hold post-game happy hours at other bars or restaurants will be banned from all its establishments (that would be a total of 2, and nowadays, for all intents and purposes, just 1).
Or it's something like that. 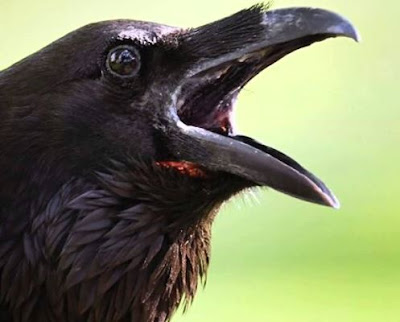 Bad Crow!
This is so typical -- and in this case, ultimately so self-defeating given the outsized role the whole kickball-and-drinking league now plays in supporting that place. Incidentally, this is what happens in the gay community when one confuses running a bar with being a priestly high class to which all must pay endless deference and, yes, actual tribute.
Incidentally, that "banned-for-life" list now must number in the hundreds. He needs a spreadsheet and high-resolution camera to keep track. 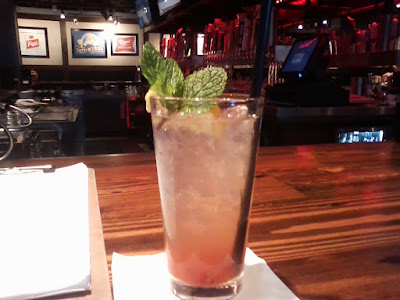 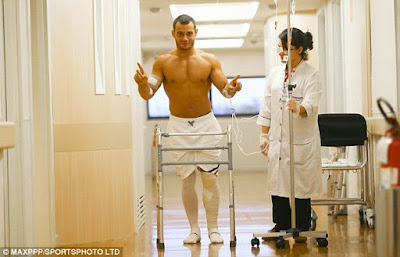 French gymnast Samir Aït Saïd smiles for the camera while taking tentative steps with the aid of a walking frame at Vitoria Barra Hospital in Rio de Janeiro barely 48 hours after suffering a gruesome compound leg break at the Rio Olympics.
*******


Changing subjects to something totally different, I would like to follow up with what I related in my previous entry about the French gymnast Samir Aït Saïd who suffered a horrible compound fracture of his left leg while landing from a vault at the Rio 2016 Olympics on Saturday (and the stretcher he was in was DROPPED by paramedics as he went toward the ambulance). 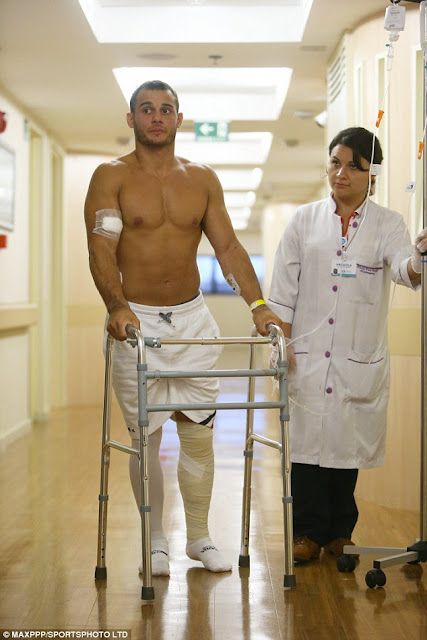 Samir Aït Saïd with a walking frame at Rio's Vitoria Barra Hospital two days after his terrible injury at the Olympics.
*******


It looks like Mr. Aït Saïdis already hobbling about in Vitoria Barra Hospital in Rio de Janiero, posing for photos, busily keeping up his social media sites -- including his Twitter one -- and all-around being in remarkably upbeat and energetic spirits including his insistence that he will make it to the 2020 Tokyo Olympics.
Here is an article from the UK Daily Mail with photos of him that I am reposting in this entry -- including two of him meeting from his hospital bed Bruno Grandi, President of the Federation Internationale de Gymnastique (FIG): 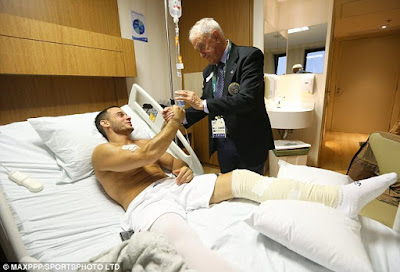 Federation Internationale de Gymnastique President Bruno Grandi pays Samir Aït Saïd a visit in the hospital.
I wonder what Grandi was thinking at that moment.
******* 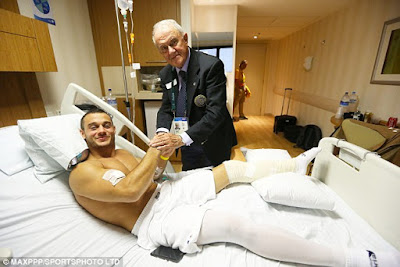 
Apparently, this is the second time Aït Saïd has had a bad left leg injury related to his gymnastics performance with the previous one occurring just prior to the 2012 London Olympics. Let's hope the third time -- Tokyo 2020 -- is the charm and, even if he doesn't win a gold medal, at least he doesn't badly injure himself again ... 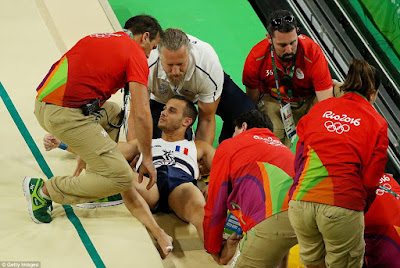 One of the pictures from Aït Saïd's horrific injury on Saturday at the Rio Olympics. The look on his face intrigues me -- unsure if he was just in a sort of shock or what but it is somewhere between serene and indifferent.
*******


OK, that's all for now. Tomorrow is a non-gym night, so I might not update the blog at all until late Wednesday / early Thursday. I still need to post the second part of the long-ago "family feud" edition.
--Regulus