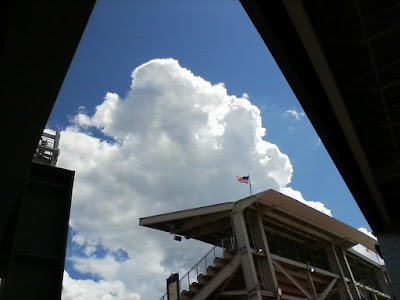 One section of the upper tier of Nationals Park, Washington, D.C., 2:07PM August 14, 2016.
I never actually sat in the seat purchased for me by my company on our annual Nationals baseball outing. I just walked around the stadium and left by the sixth inning owing to the heat (and the fact that others were leaving). The Nationals easily beat the Braves, 9 to 1.
*******


I'm actually just coming off nearly 12 hours of sleep as I went to bed quite early last night following a day of walking out-and-about and some drinking -- by 8PM, although I woke up a number of times. I also had all manner of strange dreams.
Yesterday was, on balance, a good day but I don't have time to post anything this morning except the briefest of updates.
Weather-wise, it was hot, humid, and sunny -- with the air temperature reaching 100F at KDCA, tying the daily record set in 1943 (unsure if that is an airport or pre-airport record since it's right around the time the weather (climate) station moved). 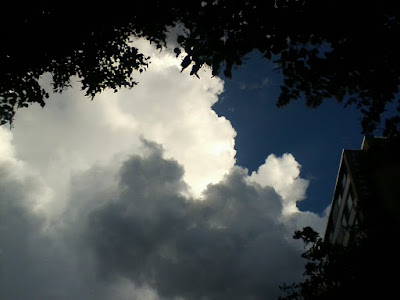 
There were, in fact, thunderstorms Sunday evening across in the northern suburbs of Washington, D.C., including Montgomery County, Md., and northeast toward the Baltimore area with KBWI receiving 0.20" of rainfall. This CWG entry features some of the stunning pictures. Here is one of those pictures: 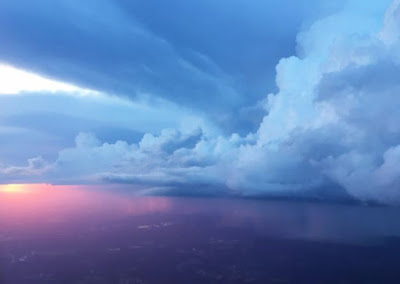 Spectacular aerial view of the thunderstorms at sunset over central Maryland in a photo taken by Pamela Hovis while on a passenger jet descending into BWI Airport, August 14, 2016.
This picture was featured in the above-linked CWG entry.
We've had a much more extensive round of thunderstorms tonight including heavy rainfall here in the District. I'll try to post a new entry.
End of Update.


One thing I should note is that the sky featured the most stunningly pretty cumulus and towering cumulus / cumulus congestus clouds yesterday and the blueness of the sky -- quite remarkable this summer in general here in the mid-Atlantic -- made it even more stunning, especially around dusk.
Damn EPA. Git the gub'mint off my back and my polluted air.
There is a better chance of thunderstorms today -- at least I hope that comes to pass. We need some rain.
Tonight is a gym night. I plan to post an update after I get home. In the meantime, read this Ross Douthat piece in yesterday's New York Times (I may excerpt it in my next entry when I have more time): A Playboy for President.