Midweek Morning Update: Another Day Closer to the End of this August and Summer 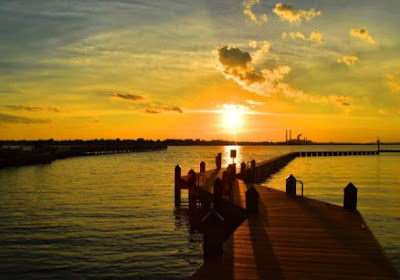 Sunset along the Chesapeake Bay in Anne Arundel County, Md., August 16, 2016; Photo by Twitter user TheBayPhotos; appeared here.
This lovely photo appeared as a sidebar on the CWG site. If I had to guess, I'd say that those two tiny splinter-like objects in the distance are actually the twin ginormous smokestacks of the Brandon Shores Generating Station.
*******


Another frickin' day. Still hot and humid outside, although not quite as warm. Yesterday, it reached 97F at KDCA, thus ending the three-day 100F+ streak. Fortunately, there is a good chance of showers and thunderstorms this evening and tonight.
Tonight is also a gym night for me. I have a more immediate problem in that I have no billable client work to do at work today.
Last night, a non-gym night, I went to No. 9 and then to Floriana, where I watched part of the movie Dave. Of note, John McLaughlin of The McLaughlin Group fame makes an appearance in that film (one of many Beltway media and political figures of the early 1990s to do so) -- and when I came home, I discovered that he had just died at age 89. I'm not going to pretend I liked his combative, rightwing politics or the whole approach to discourse that it helped to foster. Look where we are today.
OK, that's all for now. I better get this day started.
--Regulus
Posted by Regulus at 9:22 AM