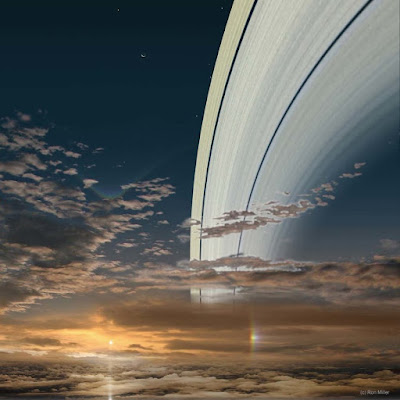 Artist's conception of Saturn at cloud-top level somewhere in the planet's equatorial region with its awesome rings sweeping across the heavens.
In point of fact, while the sky would be blue (due to Rayleigh scattering), I'm not sure the clouds would look so placid -- they are moving at tremendous speeds. And the rings -- as was pointed out in the comment section -- would not appear to sweep toward you in that fashion .
The pictures in this entry are taking from this Huffington Post article (link embedded): What The Sun Looks Like From Other Planets. It features a series of nine images by illustrator Ron Miller depicting what the Sun looks like from the 8 planets and our beloved dwarf planet, Pluto.
*******


I've been in a depressive miasma for much of the past month and, indeed, for the greater part of 2016 -- with the notable exception being my job situation and how fortunate I was when my old company collapsed to have gone almost instantaneously (well, over the course of a weekend) to a new job.
I'm also grateful for those good friends that I have -- Andrea, Quill, Chester, Mike G., and even Fred and DD.
However, everything else has been a frickin' dumpster fire, which I guess is appropriate given this is the Year of the Trumpster Fire (with Peak Insanity set for the upcoming GOP convention/freak show/hate-fest, and not really over until the upcoming, even-more-problematic-than-usual American national election is safely out of the way).
June was a disaster -- actually, a borderline catastrophe -- for me and July is just sort of dead in the water. I hate summer in D.C., I hate D.C. in general, and I'm in a deep midlife crisis, stuck here in the Eternally Youthful City of Oz, the District of Columbia, as I get old.
And getting old I am at age 46. 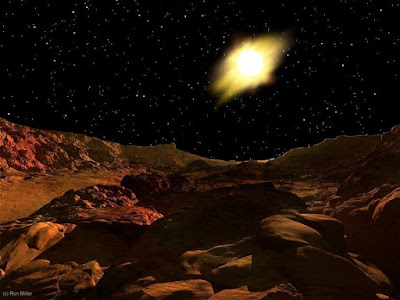 The Sun as seen from the nearly airless world of Mercury, Ron Miller illustration.
*******


Even my rigorous gym routine that I have kept up for the most part for four years in a three-out-of-seven-days-a-week schedule appears to be crapping out on me. How else to explain my weight ratcheting up to nearly 152 pounds -- now up a full 10 pounds from my low following my rejoining the gym in June 2012 -- despite jogging a bit more than the equivalent of a marathon almost without fail for the past six months (with some exceptions, of course) in every Saturday-to-Saturday period (6.67 x 4 = 26.68 miles) including this month so far.
And I am almost certain it's not "muscle mass" that I'm putting on -- that's bullshit and I know it. Indeed, even if I am presently more muscular than I've ever been in my life, that's not saying squat. I still have a ridiculous look, appearance, and body that is somewhere between a leprechaun, a munchkin, and an ashen gray-pallor Polish peasant.
I'm visually kind of facially unattractive (it's gotten worse as I've gotten older) and I know that. This is why I photograph so spectacularly badly.
My hair (of which I have no shortage on my head) looks dreadful and I have to keep it short for that reason. More generally, I'm on a one-way journey to old age, at which point I'll be nothing but some recluse living in a Venus fly-trap of a wee apartment in some awful apartment building in a forgotten corner of the District of Columbia. 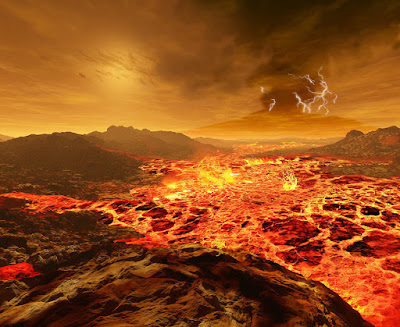 This is supposed to be how the Sun looks from Venus in Ron Miller's illustration. I'm not sure that the surface of Venus is anywhere presently molten. That's unknown. Also, the dense pall of sulfuric acid clouds -- which form a "shell" around the solid planet between 50 and 75km in altitude and are in superrotation with respect to the planet -- would likely shroud the Sun entirely. Also, the optics in such an incredibly dense and hot atmosphere -- 93 bar surface pressure and uniformly about 872F -- would be rather bizarre.
*******


To reiterate, while I'm still down 35 pounds from my Peak Flab Fat, that doesn't do me much good if I'm indeed on an upward trajectory.
Re. the weight gain, I suppose it is all the drinking -- even if it is mostly vodka soda. My food diet is, by an large, relatively healthy, but at some point, I guess none of that matters. I'm getting old and it's catching up to me. My body just "wants" to be fat.
I guess I need to give up drinking entirely and live in suburbia and eat macaroni-and-cheese while trying to sing in a goddamn church choir at the Church of the Perpetual Tax-Free ATM Machine.
NOBODY on this goddamn Planet Earth finds me attractive -- at least not the folks I would want -- and instead it's just the usual (metaphorically) self-defecating (yes, you read that right) losers. 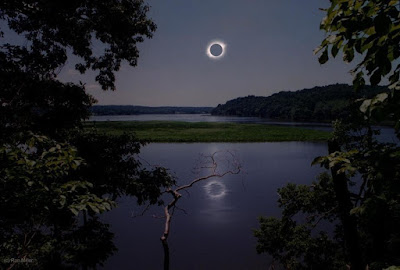 The Sun as seen from Earth during a total solar eclipse, illustration by Ron Miller.
*******


Physical attraction aside, what's worse is that I have a dense cloud over me, metaphorically speaking, and so many people just dread seeing me come. Of course, I don't particularly like seeing that many people. The big, happy exception is my job where I do have a good rapport with all those with whom I work.
At the gym tonight, there is a young, attractive, muscular man -- he mustn't even yet be 21 years old -- who is very soft-spoken and was showing me how to correctly do some weight-lifting, since everything I do is, naturally, wrong. He has jet black hair (dyed), dark eyes, and a nice complexion. He looks as though he could be a (non-blond) Mormon. I know he is an undergrad at UMCP interested in going into the medical profession and he is from D.C., where he lives with his parents.
I could actually fall for him -- though I won't. It's been many, many years since I fell for anyone. It always ends up a used tire dump fire. 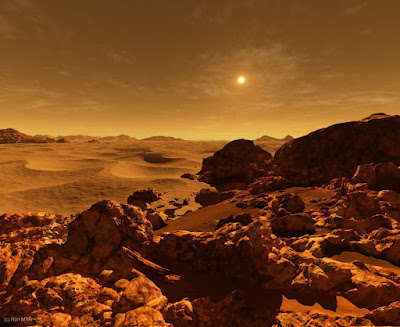 The Sun as seen from Mars, Ron Miller illustration.
Were the sky totally free of dust, it would appear blue, but the very fine particles create a hybrid Rayleigh and Mie scattering, giving the midday Martian sky that "butterscotch" hue.
*******


Speaking of the gym, I may just skip my planned non-gym bar night tomorrow night after work and go to the gym again, although mix it up. I'm chagrined that the gym management -- the YMCA Anthony Bowen -- abruptly decided (apparently after a management change) to keep the studios locked when not being used for a class on the ridiculous pretext of liability that folks could hurt themselves in there (never mind the vastly greater opportunities for hurting oneself on the main gym floor, the weight room, or even the sauna and steam rooms).
There is an upstairs conference room that I can still use, at least sometimes, and an outdoor second-floor deck. 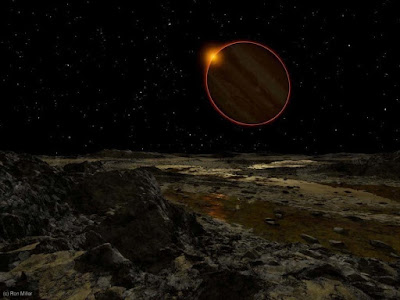 The Sun as seen from the Jovian moon of Europa with Jupiter about to eclipse the distant Sun, Ron Miller illustration.
The Great Red Spot is too big in this illustration.
*******


I'm supposed to meet Kristof on Wednesday. He's the last one that I see from my erstwhile regular hang-out group now that everyone else (from the truly bourgeoisie-dreadful Wall-P crowd; to Hysterical Gee and that shrieking; to Gasy the Chipmungorilla (enuf has been said about that subject); to LP and his deeply vexing ethno-religious exclusivity and weird condescension (not to mention possessing an incredible ability to annoy and hijack situations); to Crazy Uncle Fester ("I've got 38 balls in the air at once and I'm going to be a billionaire as soon as one of them work out!!" -- except none of which ever will); to the whole Larry's Lounge trap house crowd; to, unfortunately, even Jamie).
And I'm not sure why I see him since he doesn't even particularly like me and , I suspect, all he does is take what I say and relay it back to whoever for the purpose of getting Big Laughs. We do text exchange Frasier, Are You Being Served?, and Keeping Up Appearances lines, though, on occasion. 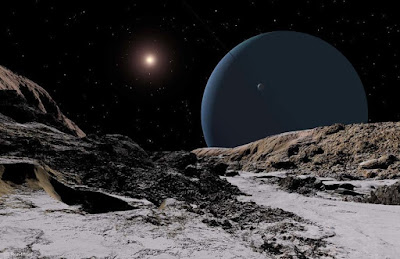 The Sun as seen from Uranus's moon of Ariel, illustration by Ron Miller.
*******


Honestly, it vexes me to no end that I never, ever fit into the shitty D.C. gayborhood community -- even back when I had a chance to do so. It was always failure, and now it's too goddamn late, and instead, I have to just watch as the next generation and the one after that arrives -- like row upon row of (pretty) shark teeth (to use a metaphor about all the young people who come to D.C. that I once heard, from a cab driver taking me from Flagler Beach to Daytona Beach after that disastrous trip to see my crazy father). 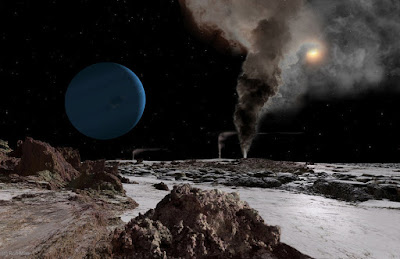 The Sun as seen from Neptune's moon of Triton, Ron Miller illustration.
The Planet Neptune is really cool looking, and given my birthplace -- Neptune, New Jersey -- I feel an affinity for his most unusual of worlds.
*******


Yet I simultaneously can't stand so many mind-numbing aspects of that community and its little self-satisfied gay mafia or, if you prefer, bartender / personal trainer high priesthood. There is a checklist -- just ask you-know-who -- and it goes something like:
✓ silver-white BMW (model less than 2 years old)
✓ dog (usually a female)
✓ 50 pairs of Diesel jeans and ugly shirts
✓ runaway sense of entitlement centered on service industry and tipping
✓ center of attention at all times in all situations including in those weekend gay sports leagues, one of which is, ridiculously, kickball.
✓ condo with granite countertops, track lighting, flat screen TVs, and IKEA furniture.
✓ 2-3 weeks in Rehoboth Beach in the summer with 50 closest friends
✓ family with a beach house somewhere on the Outer Banks (often Duck)
✓ body self worship with multiple tattoos (it's a thing now, and has been for quite some time)
✓ linked up as boyfriend or husband with what amounts to another version of self (and, hence, low probability of long-term success)
✓ another incipient profession tied to schooling, health care, the arts, or "non-profit" and/or "consulting" work -- the key here is that the individual is always at the center of attention (yet self-deluded that you are a "caregiver")
✓ ultimately, a thoroughly unpleasant and nasty human being
All that aside, for me, every goddamn thing failed, I can't fix it, and now I just have to go on. I do not want to be in D.C. if and when I am an actual old man -- by which I mean anything beyond my 50s. This is a young person's city.
Of course, at the rate the country is going, God only knows what things will be like in, say, 2030. It won't be pretty, but I can't worry about that in 2016. 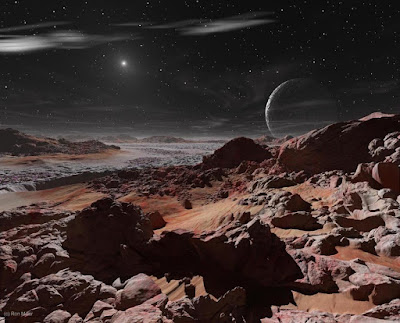 The Sun as seen from Pluto with its "double planet" of Charon hanging forever motionless in the sky, illustration by Ron Miller.
*******


OK, that's all for now. I'm enjoying some Seltzer water as I write this. I really don't feel like starting dinner at 11:30PM, so it's just a handful of this and that. The Seltzer water is the Refreshe brand, now that the 17th Street Safeway is no longer, apparently, carrying the Vintage brand.
Unsure if I'll post a new entry tomorrow. This was not the entry I had intended to post.
--Regulus