Friday Weather Foul: Another Overheated and Over-humid July Night in the Seat of Empire 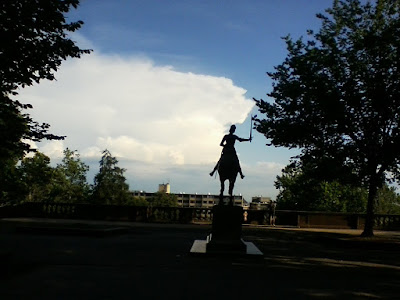 The Joan of Arc equestrian statue in Meridian Hill Park and a distant cumulonimbus complex, Washington, D.C., 6:21PM July 8, 2016.
More on that distant thunderstorm complex below. Of note, the picture I took over 4 years ago of the then-just-refurbished Joan of Arc equestrian statue continues to be (as of today) the one used in the Wikipedia article on Meridian Hill Park. I sent the image to Wikipedia and said it could be used without attribution.
*******


This is a reworked and shortened version of the entry I had intended to post last night after the gym but the events in Dallas interrupted and I posted a very different entry than planned. As for this morning, I just posted this one instead.
This particular entry contains none of the multiple links to political-themed pieces that I read and liked this week by my usual must-read triumvirate of Jonathan Chait, Paul Krugman, and Andrew O'Hehir. I have those saved up for another entry that I'll try to post tomorrow. If I try to post that full entry tonight, especially with my current lack of break-text images, it will take me until frickin' midnight, and I'm not going to waste my Friday night that way. 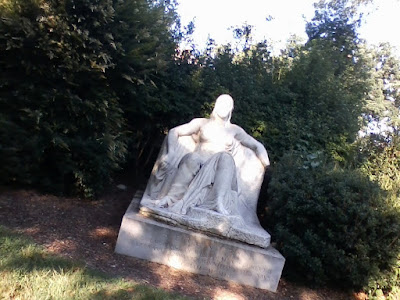 
Anyway, turning to the kvetching about the July weather this July in Washington, D.C., Seat of Late Stage American Empire, early 3rd Millennium ...
It's too goddamn hot and too goddamn humid and I really goddamn don't like living D.C., but where else can I reasonably expect to go that isn't even worse (such as any place in the South, Appalachia, much of the Midwest and Great Plains, Texas, large swaths of the desert Southwest and Intermountain West, and the L.A. basin). Just askin'...
As I started this entry (around 630PM), it was near 90F outside and disgustingly humid, as usual, but with all chances of thunderstorms ended after some piss-poor cells moved across the immediate D.C. area several hours ago. 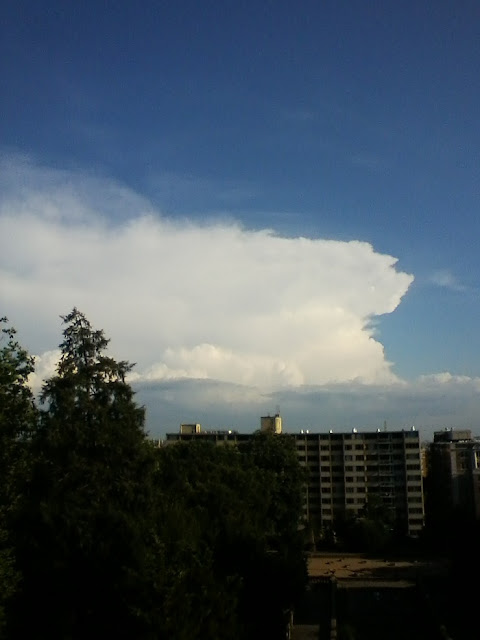 Another view earlier this evening from the overlook at Meridian Hill Park with aforementioned thunderstorm in the distance, Washington, D.C., 6:21PM July 8, 2016.
This is the view to the south overlooking the inner core of D.C.
*******


The early July evening Sun was back to blazing and the dew point had spiked into unusually high territory even for D.C. -- mid-to-upper 70s Fahrenheit. Specifically, the 7PM KDCA observation had an air temp of 84F and a 77F dew point after a high of 91F there.
The highest dew point ever "officially" at KDCA is about 82F or thereabouts -- we neared it at 81F on one occasion back in July 2011 -- and anything over 75F is kind of unusual.)
This followed a brief shower that dropped all of the usual "trace"). KBWI had 0.25" and KIAD picked up 0.03". 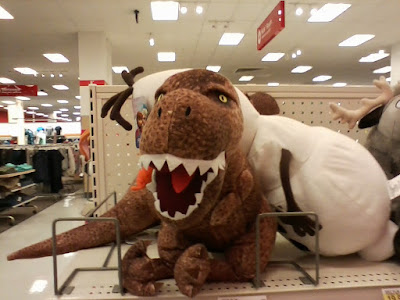 Stuffed monster animal at Target, Washington, D.C., 5:45PM July 8, 2016.
I think I have enough stuffed animals -- especially hippos and some monkeys -- on my makeshift bed.


After work, I went to the Columbia Heights Target, where I purchased some needed items including two large packs (6 and 8, respectively) of crew-neck tee-shirts, a four-pack of boxer briefs, some slippers, a new gym shirt, and two 8-packs of the Schick Extreme3 razors (about an 8-week supply for me), as well as some laundry detergent and liquid soap refill.
The whole thing cost about $137. Oh, and the Target there in the barrio was less chaotic and ghetto than it typically is, though outside was the usual farrago of disparate humanity. 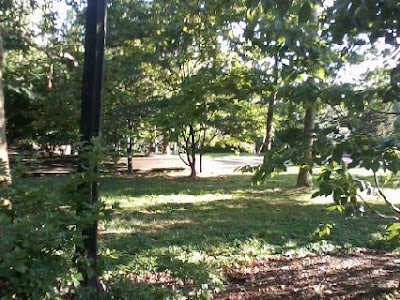 
The walk home to my place in the 2000 block of New Hampshire Ave NW was nothing less than hellish -- face first into the blazing sunlight with heat and humidity abounding on Irving Street to 16th Street, including a goddamn 1-minute wait for the traffic light where 15th Street merges at an oblique angle into 16th Street.
I walked south along 16th Street but cut through Meridian Hill Park -- where the pictures in this entry were taken.

Sterling (LWX) NWS radar in standard composite mode looped 6:11PM - 6:36PM July 8, 2016.
This shows the cluster of thunderstorms over lower Calvert and St. Mary's Counties in Maryland and the lower tidal Potomac River about 50 to 70 miles south/southeast of D.C. It is the top of this (these) that are visible in the images I posted in this entry taken earlier in Meridian Hill Park.
*******


A mass of cumulonimbus clouds was visible, quite dramatically, many miles off to the south. That was the wussy line that had passed through around 3PM -- only to develop more dramatically once free-and-clear of the D.C. area. The radar loop above shows these thunderstorms located about 50 to 70 miles SSE of D.C. at that point. Maybe there really is some convergence zone down there.
Needless to say, in the direction from which "the weather" was coming -- from the WNW -- was nothing, just endless frickin' blue sky.
That's just the general Spitefulness and Amorality with which the Universe is run or runs itself (take your pick). Perhaps across the Multiverse, it is different, but not in this Gnostic Universe.
So the Sue Palka-Cabra got what she wanted again, as did the suburban D.C. bourgeoisie. Over at the CWG, I'm sure at least one of them is purring like a kitten about how great it's going to be this weekend weather-wise. 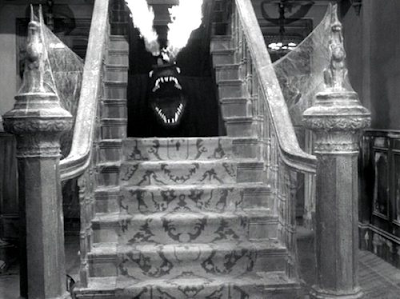 
OK, that's about all for now. For the weekend, I don't really have any particular plans -- just the usual stuff. I'm planning on going to Floriana and then Trade and/or No. 9 tonight and to the gym tomorrow afternoon. Sunday may feature a walk, although it's going to be goddamn hot (low 90s F).
Next week, I'm actually visiting my mom on Saturday and staying until Sunday. 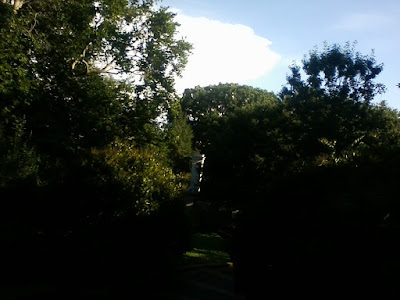 The southeast corner of Meridian Hill Park with top of distant t-storm complex poking up above the trees, Washington, D.C.,6:23PM July 8, 2016.
I skipped any pictures of the statues located in that corner of the park of Dante Alighieri or James "Worst President Ever" Buchanan (R - Aunt Nancy).
The corner of the park is less than 1,000 feet from where I live. That said, you don't want to be in Meridian Hill Park at night.
*******


My next planned update will be tomorrow evening with the content to which I alluded above, although if I run out of time, it might instead just be the jukebox Saturday night feature (which I intend to post regardless).
--Regulus
Posted by Regulus at 8:56 PM