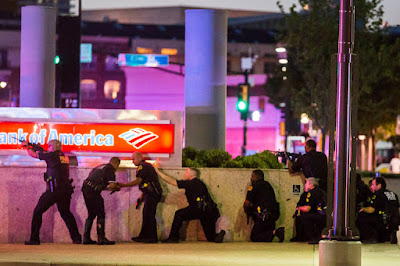 America's never-ending agonizing racial passion play continues in its episodic fits-and-starts here in the late Obama era way with two fatal shootings in the past several days of African American men -- one in suburban St. Paul, Minn., and another in Baton Rouge, La., both of which were graphically recorded (the latter in an online livestreaming of the purported immediate aftermath and replayed endlessly all over the media / entertainment complex's various appendages). Earlier tonight, gunfire erupted in Dallas at a rally protesting those killings with reportedly two snipers shooting 10 or 11 Dallas police officers including regular force officers and those with the Dallas Area Rapid Transit, killing 3 (possibly 4) 5 and injuring 7 others. The situation is still fluid as I write this.

Whether these snipers were motivated by the situation being protested or it was something else, and that's why the police were targeted, that's unknown at this point.


In any event, for a variety of reasons, I'm just not going to give any political commentary on this vexing and ugly matter. It's best if I don't even try to touch this topic in this blog forum. Happy to talk in person. 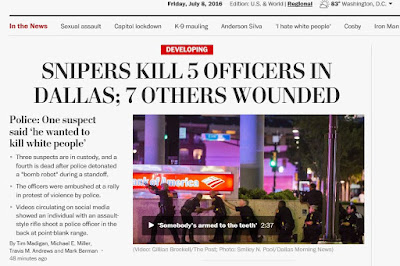 Washington Post online headline at 9:51AM July 8, 2016.
(I updated the two previous images I had used as this headline contains updated information.)
*******


If you do want to read commentary of the ugliest sort, just tune into any goddamn comment section of any goddamn online article about this -- or any topic. The internet is a vulgar sewer that has been, on balance, a very deleterious thing for society (as has the whole commercial media/entertainment complex). America's system has sown the seeds of its potential unraveling.
******* 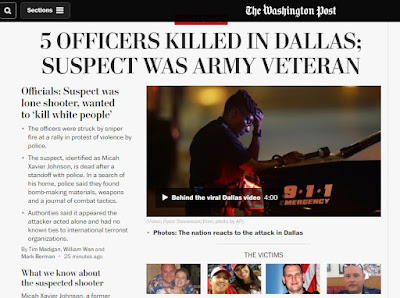 Washington Post online headline at 7:05PM July 8, 2016.
Officials now report the sniper -- Army Reserve veteran Micah Xavier Johnson, 25, most recently of Mesquite, Texas and who served a tour Afghanistan in 2013 -- acted alone. He was acting reportedly out of a desire to "kill white people," most immediately because of the twin police killings in Baton Rouge and suburban St. Paul and had connections to black power groups but no known ties to terrorist organization or even a criminal record. He was killed by police with a "robot bomb."
End of Update.


Suffice it to say, for as bad as the Salon.com and MSNBC thought police crowd are on the Left, the general public commenting on the internet define ugliness and trolldom of the Right. Comment sections should be eliminated outright.
Anyway, I'm going to try to post another entry tonight, although I've been having no end of internet connectivity problems since I got home for at least two technical reasons.
--Regulus
Posted by Regulus at 12:57 AM