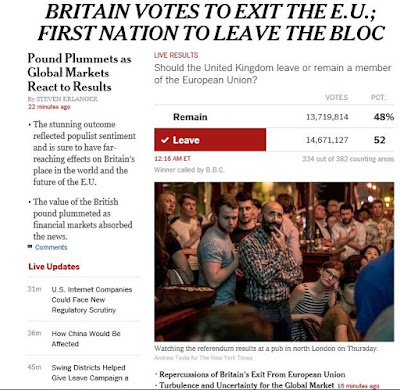 
This entry is coming to you at the ridiculous hour of 330AM because I tried to compose it over the course of several hours (after I got home from the gym) while watching the results of Great Britain's historic EU referendum -- "Brexit" vote -- slowly but relentlessly arrive. Along the way, I got distracted with and instead wrote two entries -- a lengthier one and a brief one. Except the brief one morphed into the longer one. this abbreviated edition with all results being reported.
Anyway, here is the headline message:
BREXIT "LEAVE" VOTE UNEXPECTEDLY WINS! YAY! 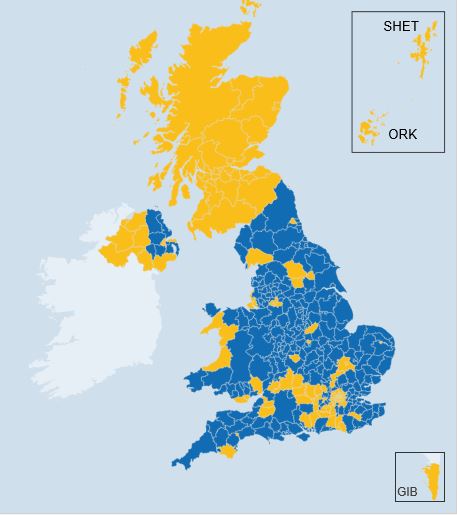 
So the Brexit vote won 51.9% to 48.1% -- that is, just about 52% for "Leave" and a tad over 48% for "Remain," the only two options. All 382 "local authorities" are now reporting across the UK.
Turnout was high at 72.16% of the British electorate overall across the four "nations" that make up the UK -- England, Scotland, Wales, and Northern Ireland. The actual vote total (which may change a bit) is put at 17,410,742 million to leave and 16,141,241 to remain in the EU. A solid majority in Scotland and a majority in the Greater London area voted "Remain," as did Northern Ireland, but the bulk of England (beyond London) and Wales voted "Leave." Ironically, if Scotland had broken away, it wouldn't have had to worry about this at all. 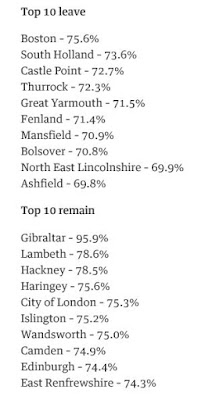 Left: The top 10 "leave" and top 10 "remain" local authorities by percentage of vote for either option. (This was taken with about 90 percent of the vote counted, but I don't think anything changed.)


At one point, the UK Guardian -- whose site I was using along with the BBC one to get election results -- had the following statement:
"Many media organisations have now called it for leave. The picture that is emerging is of a heavily polarised country, with remain areas coming in more strongly for remain than expected, and leave areas more strongly for leave. Geographically, Scotland and London have voted overwhelmingly for remain, but England leans heavily to leave." 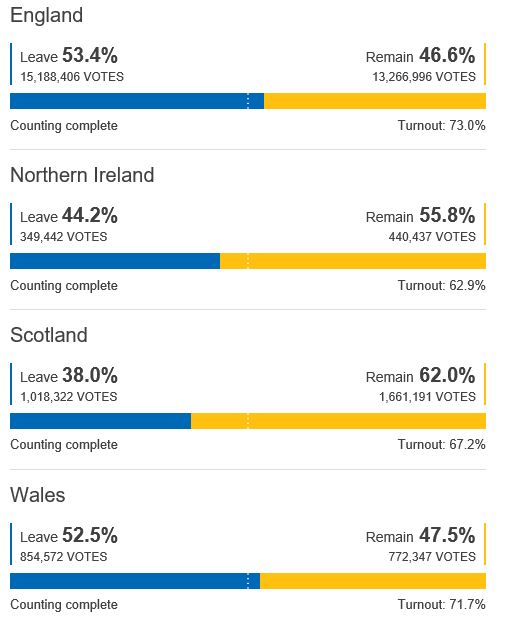 Brexit votes by nation within the United Kingdom with all four nations -- England, Northern Ireland, Scotland, and Wales -- counting complete.
The election results took a long time to come in -- and it appears that many people across the UK stayed up into the wee hours to watch them arrive.
*******


The really good news is that the neoliberal world order-- the EU bureaucrats, the German bankers with their moralizing and "austerity forever" path of ruination, the speculators and financiers of Wall Street and "The City," and the frickin' Washington Consensus crowd -- got a really swift kick in the ass tonight. More on that below. 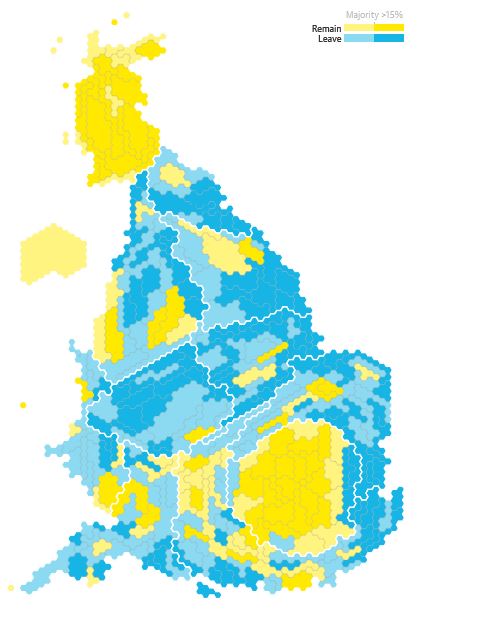 This is a population-based histogram map of the outcome across the UK's 382 local authorities voting in this referendum with all but four reporting.
It was actually in Tory-represented areas where the vote was most heavily for "Leave" -- in direct defiance of British Prime Minister David Cameron's personal, full-court effort on behalf of the "Remain" vote. His own political future is quite cloudy at the moment. Good. The last election outcome was pretty shitty.
The takeaway message here is that Cameron screwed up but Labour really didn't "win" anything big. The whole Brexit vote was the doing of UK Independence Party leader Nigel Farage.
******* 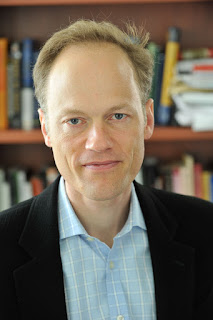 Sebastian Mallaby has yet to update his Twitter feed after hyperventilating on this issue for weeks with lots of fearmongering about how it's the end of the world -- rather than just a hard kick in the ass of his beloved neoliberal world order. Mallaby's "defeat" in this is probably the most satisfying outcome for me personally, but I'll get into that in a subsequent entry.


I will say that Mallaby is likely to be as right about the "apocalypse" of a Brexit from the awful EU as he was when he was one of Fred Hiatt's editorial writers for the WaHoPo on any economic, financial, or foreign policy issue. 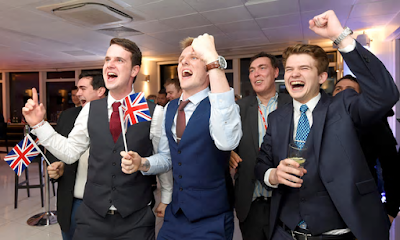 
The EU has become a hideous institution of the neoliberal overclass world order -- enforcing a regime of austerity, misery, and poverty on so many of its member countries all at the behest of German bankers and their endlessly unctuously moralizing German government enforcers (yes, this means you Angela Merkel). 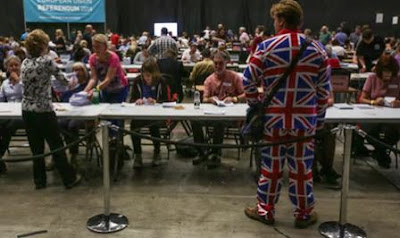 A woman dressed up in quite the Union Jack outfit arrives to vote in the EU referendum in the UK, June 23, 2016.
It's nice to see a little bit of that American garish simplicity in Great Britain.
*******


The EU and its besuited Brussels diplomats and economists also is facilitating the immigration crisis and quasi-fascist backlash that has erupted in so many European countries as a result of the "open borders for anybody" policies that member states are supposed to have -- and resulting in the deaths of so many thousands of people including this little boy making the perilous trip in search of a better life. 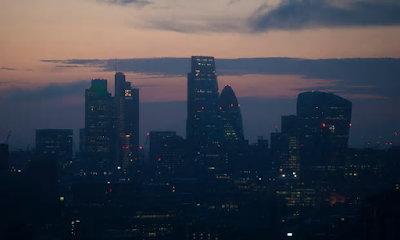 Dawn breaks over the City of London Financial District -- with its futuristic looking skyline -- on June 24, 2016 the day after the unprecedented British vote to leave the European Union.
*******


The British pound collapsed over 10 percent in early morning trading -- falling to levels not seen since the near-parity episode in 1985 (which I well remember even though I was only 15, as I followed crap like that back then). The pound fell to US$1.33 at one point this morning. (The 1985 low was, I believe, US$1.03 -- but that was in a different world back then.)
Screw these financial market rigged casinos (is there any other type of casino??). On balance, they cause more economic and financial harm than do good in the way they currently are configured and run. 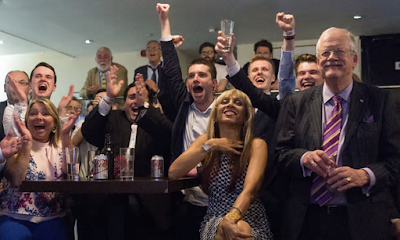 
Returning to my favorite topic of complaint, the Washington Consensus crowd, last week, Fred Hiatt committed some journalistic mal-ethics by having Sebastian Mallaby (see above)-- now ensconced at the Council of Foreign Relations -- write an op-ed on behalf of his overclass paymasters featuring the usual hysterical fearmongering of the "Remain" side but without mentioning (at least in the online edition) Mallaby's former role as an editorial writer. 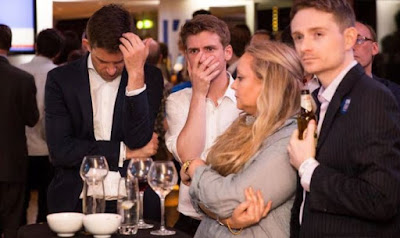 That is, Fred Hiatt didn't at least admit his own ideological "conflict of interest" by identifying Mallaby as a former editorial writer for Fred Hiatt (as his boss) who wrote all the unsigned editorials for The Post back in the late 1990s and early 2000s cheerleading the free trade fetishizing, offshoring-and-outsourcing-is-great, financialization-of-everything favored by the neoliberal world order.

Except Beltway "Professional Centrists" of Hiatt's ilk don't even comprehend that theirs is an ideology, and they take it is as "self-evident" in service to the overclass priorities of "globalization," austerity, cutting government pension programs (read: Social Security), hard money, and unbounded immigration.

Oh, and while Mallaby was doing the bidding of the neoliberal overclass, his then-fellow editorial writer Benji Wittes was first fawning over Ken "Fallen" Starr during his Monica Phase and then, in the post-9/11 world, neoconservative warmongering and "Deep State" surveilling while yapping about the joys of drones and, weirdly, how great is Guantanamo Bay detention facility. 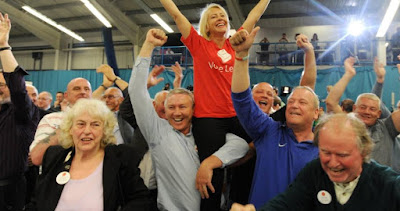 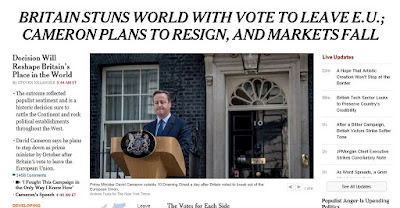 It looks as though Prime Minister Cameron is resigning. Good. World stock markets fell sharply this morning -- but these are transient panics that will pass. These markets have too much power over the actual world anyway and yet produce little of real value. "Liquidity" -- that's bullshit-speak.
Here is a high-resolution map showing Brexit results taken from the New York Times: 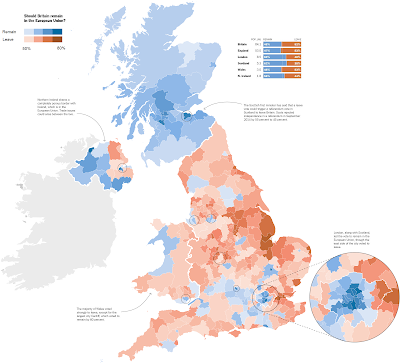 Download and open in Paint or some such program to see the full map. It is necessarily reduced in size here.
End of Update. 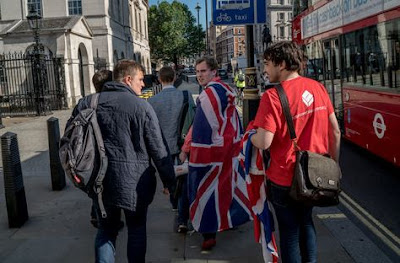 So Fred Hiatt dutifully featured another op-ed by Sebastian Mallaby in today's WaHoPo that was a neoliberal overclass cri de cœur for the Brexit vote. I have a few comments in there including one in reply to a rather remarkable one by someone called "Sustainable Abundancy". Also, of note, a weird narrative fanned by the mainstream media has taken hold whereby the British didn't understand for what exactly they were voting and now "regret" it.
For his part, Paul Krugman in this blog posting seemed to blame equally the hapless Cameron government and the extremist jingoism of the British tabloids for the Leave victory, although he is uncertain of the ultimate adverse effects.
End of Update 2


OK, with that I am going to sign off and go to bed now. I'll try to post an update tomorrow but I'm not sure. It might not be until Saturday.
At this point (as I post this at 2:10AM), all authorities have reported. The last two were Cornwall and some place called "Basingstoke and Deane District" -- both voted narrowly to "Leave" the EU.
--Regulus
Posted by Regulus at 3:30 AM