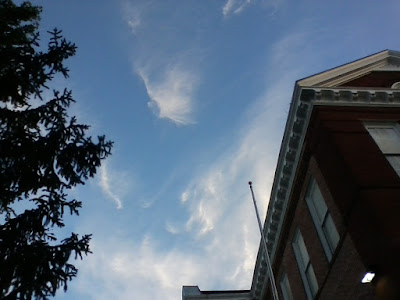 This is just a quick Saturday night update before I post my already-prepared Jukebox Saturday Night edition for this week.


Today was a gym and chores day in that I went to the gym and had a full workout -- except for the core part, which I can't seem to get back into a groove of doing. I had a couple good conversations as well including with my gym acquaintance Aydin, who I sometimes also see at the Floriana grotto bar. 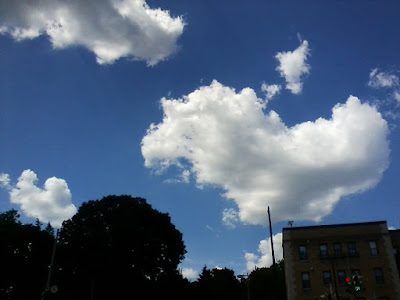 Fair weather cumulus clouds in a blue sky seen above 15th Street NW next to Meridian Hill Park, Washington, D.C., 3:10PM June 18, 2016.
I was walking to the gym. That one cloud sort of is in the shape of mainland (People's Republic of) China. Does that make the cerulean blue sky actually china blue??
*******


Aydin just came back from a 2-1/2 week trip to New Zealand that included a 4-day preliminary stay in Australia (in Sydney). He and his friend went both to the South and North Islands centered on Christchurch and Auckland, respectively.
Hearing his experiences in New Zealand were very revealing to me because it told me both why I really want to go there but also gave me a more realistic picture of a place that I fantasize as a permanent escape from Washington, D.C., and the United States overall. (What he said is a topic for another entry, not now.)
Interestingly, I was on the treadmill when he started to talk to me -- closing in on about 4.7 miles of my 6-mile planned jog (plus 5-minute cool down that added another 0.34 miles). I say this because I was doing the South Island New Zealand course run (there is also a North Island course run and an Auckland-and-Wellington run) as he was talking to me.
I never actually talked to someone that long while on the treadmill. 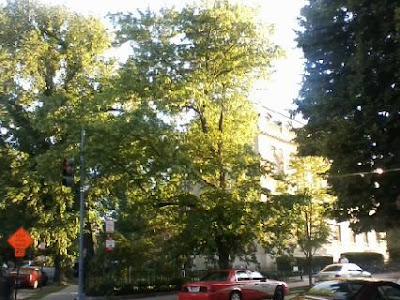 
Thereafter, I did some weightlifting (the YMCA Anthony Bowen has just expanded its downstairs weight room, which is good) and a 15-minute swim.
Later, I got a haircut at the Hair Cuttery on Connecticut Avenue. Apparently, the entire computer system of the company was malfunctioning / down today and that caused the new manager there no end of stress as she tried to do multiple tasks without a functioning system. She was harried and customers were annoyed -- with one young gay guy just standing there for, like, a half hour waiting for her system to come up so he could get his change.
I went across the street to Starbucks to break a $50 bill so that I'd have exact amounts and returned. (The Bank of America ATM at Pennsylvania and 15th NW spits out two $50 bills and five $20 bills if you take out $200.) 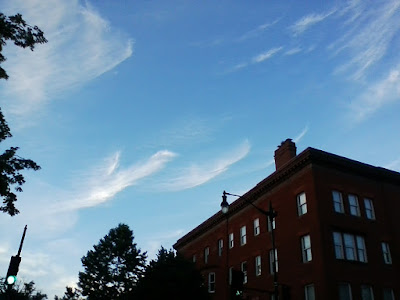 Evening sky seen from the corner of R & 18th Streets NW, Washington, D.C., 8:12PM June 18, 2016.
The cirrus tufts in the deepening blue sky were very picturesque, especially as lit by the setting Sun.
It takes forever to get dark this time of year.
*******


Bea cut my hair. I really like talking to her. She showed me a picture of her son skydiving over Texas last month as the result of a dare and the text he sent her).
I'd like to give skydiving a try sometime. I would NEVER bungee jump, though.
I went to the grocery store and then returned home and did several loads of laundry including some bedding.
Yesterday, I was not very productive at work -- following three very productive days at the merit review as a note-taker. I went with a co-worker (who so reminds me of my former co-worker DD) to Old Ebbitt Grill (after Elephant & Castle didn't work out). We had a nice time at the Oyster Bar. I later met Fred at Annie's, where we sat upstairs. It turns out Annie's has a happy hour of food and drink that is reasonable.
Fred is actually at his 40th high school reunion today down in Fredericksburg -- although he actually went to high school in Woodbridge, Va. 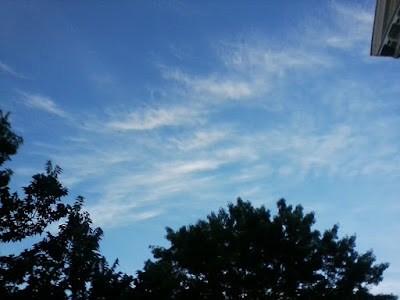 
For tonight, I may actually go back to Old Ebbitt to sit at the Old Bar and have a late dinner and then go to Trade and/or No. 9.
For tomorrow, it is my free day, and I'm planning on taking a walk. The weather is forecasted to feature, once again, endless sunshine and warmth, neither of which are my favorite things. I will bring a jacket in my book bag since if I end up in a darkened, air conditioned bar or restaurant, I will quickly go from being sweaty to cold.
I may try to update the blog again tomorrow morning. I do have a potentially major issue with my health insurance not covering the GWU hospitalization from June 4th, which for its part is outlandishly expensive for the services received. This could be a major problem requiring a battle royal on my part, although the person I spoke to yesterday with my insurance company said the initial rejection of the claim was pro forma and not to worry about it -- more info was needed from GWU hospital.
OK, that's all for now. Jukebox Saturday Night entry to follow almost immediately ...
--Regulus
Posted by Regulus at 11:22 PM