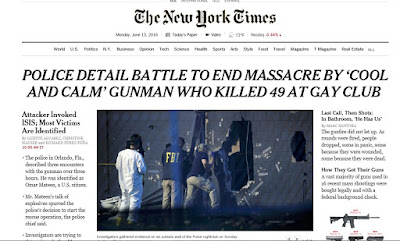 New York Times online headline a short while ago on the Orlando terrorist attack that resulted in the massacre of 49 people very early Sunday.
*******


Monday early afternoon.
I really hadn't planned to post an entry now, but I just had to acknowledge the horrific massacre in Orlando at a gay night club that killed 49 people in a hate-inspired terrorist attack by a young American Muslim aimed at the LGBTQ community. The terrorist, Omar Mateen, a U.S. citizen, was killed by a SWAT team during the attack as well at the end of a three-hour standoff in the wee hours of Sunday morning. 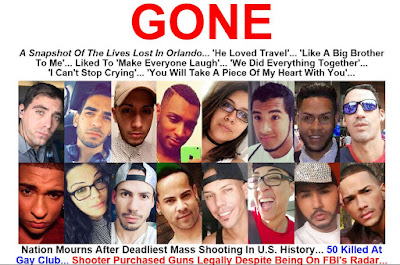 Some of the victims of the anti-LGBTQ terrorist attack at a nightclub called Pulse in Orlando.
*******


This is the worst mass shooting in U.S. history -- and that's saying a lot given the regularity with which these things occur in this gun-fetishizing country. 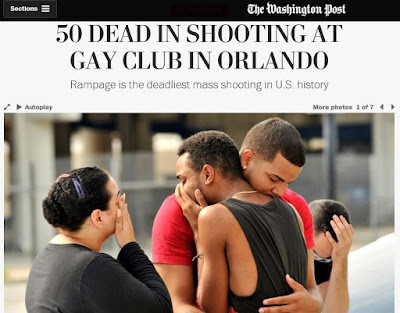 There were a number of vigils held around the U.S. this weekend, and it gave the ongoing gay pride events in a number of cities including Capital Pride here in D.C. that ended yesterday into a much more somber and serious tone, as well as heightened security. 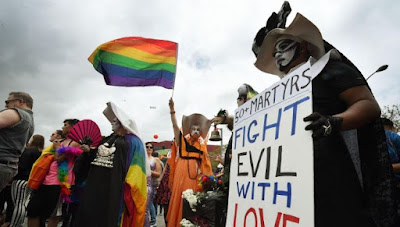 Scene from the Los Angeles Gay Pride event yesterday honoring the victims of the terrorist attack in Orlando.
*******


President Obama condemned what he called this "homegrown extremism" in comments a short time ago. 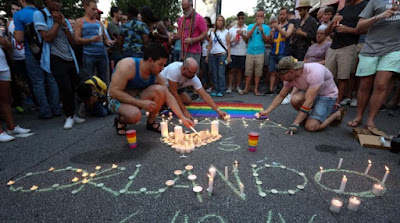 A vigil is held in Atlanta for the victims of the Orlando terrorist attack.
******* 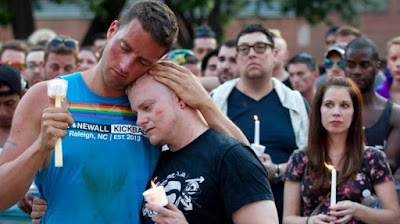 Ryan Gibson, left, and Tabor Winstead at a vigil in Raleigh, N.C., for the victims of the Orlando massacre.
*******


It's Monday early afternoon and I'm off from work. I will be returning to work -- finally -- tomorrow, and it looks like I will be fairly busy. For today, I was just planning on going to the gym and then perhaps taking a walk. It will again be a light and shortened workout as I am not fully recovered and my knee still hurts.
I had a really lunch with Quill yesterday in Bethesda at Rock Bottom and then we sat outside in the gusty, sunny, blue-skied day at one of the innumerable fountains in downtown Bethesda. Later, I headed back into D.C., and I stopped at Floriana and then went with Jamie to Fox & Hounds where we had a really nice time.
Oh, yes, when I got back into D.C., as I walked over to No. 9 for a bit, I caught sight looking down 16th Street -- at the end of which the White House is visible about a mile away -- far in the distance a ginormous cumulonimbus cloud just east of due south.
When I got to No. 9, amazingly attractive bartender Jose was there but not working. He was there with his husband having a drink. I got Jose to look up the Wakefield AKQ radar and -- just as I estimated -- that thunderstorm was located about 200 miles away near the Virginia - North Carolina border about 30 miles west of Norfolk.
Jose seemed impressed that I was able to call that.
OK, that's all for now
--Regulus
Posted by Regulus at 12:24 PM