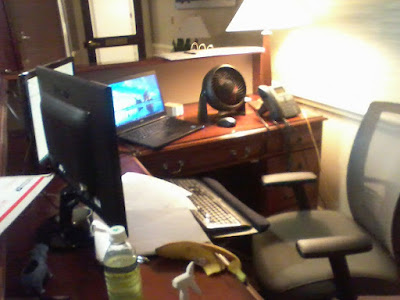 
Well, this week has been rather topsy-turvy schedule-wise owing -- presently because of a major work assignment I need to have wrapped up by June 1st (next week). This involves the BTO peer review project summaries. In addition, next week I have to get ready for the big VTO AMR event the following week, so I need to have this wrapped up by then.
As a result, I'm at work late again tonight instead of going to the gym, as I had planned. My new plan is to telework tomorrow -- that is, work from home -- but also go to the gym early afternoon. (The office is probably going to empty tomorrow anyway.)
I'm here now because I have three monitors -- see lead image to this entry -- that makes it far easier to work. I'm presently (for the time being) sitting where an office administrative assistant would sit. Remember that I'm not "embedded" with the client (I'm not onsite at Forrestal but next door in the L'Enfant complex).
I'm listening to the AccuRadio smooth jazz station (in between annoying commercial breaks that I mute), have set up a lamp, and have a fan. I haven't had such a good office set up since I was at UMCP in the public policy school back in 2006 working as a sort of graduate research assistant.
Anyway, I don't have much to say now, especially as I want to do another two hours of work. I still have 20 summaries to do and each one takes at least an hour since I have to cull through pages of reviewer notes and summarize them in a "summary" way rather than "chronologically" as the reviewer comments were entered.
The weather was too damn hot today, and there is a general air quality alert in effect for moderate ozone levels. Highs today were as follows: 88F at KDCA, 90F at KBWI, and 89F at KBWI. National Airport was the lowest probably because it is on the tidal Potomac, although I should note that the Maryland Science Center (KDMH) at the Inner Harbor in Baltimore reached 91F.
I suppose the CWG and its D.C. area suburban bourgeoisie are ecstatic, thrilled, scintillated, titillated with the weather. I've not checked over there in a few days since I don't want to be annoyed.
Speaking of National Airport, I can see it from my office, or rather, I can see the Potomac River and Washington Channel and part of East Potomac Park and the more distant Woodrow Wilson Bridge. The airport itself is blocked by the 950 L'Enfant Building hulking structure. From that building, especially its upper floors, there is a spectacular down-river view including the airport. Even from my office vantage point, it is a lovely view -- day or night.
OK, that's all for now. My next planned update will be Saturday evening. I'm not going to update the blog tomorrow unless some circumstance warrants.
In the meantime, here are yesterday's and today's "Pearls Before Swine," respectively ... Both are somehow relevant ...