Jukebox Saturday Night for May 14th, 2016: The 'Round Midnight, Coconut Roads, and Free Your Mind (with Stuffed Monkey) Edition

Let's start with one of the great jazz standards ...
"'Round Midnight" as performed by Miles Davis and his quintet from Davis's album 'Round About Midnight (1957)
The info on the YouTube site states that Davis plays the trumpet, John Coltrane is tenor sax, Red Garland is on piano, Paul Chambers plays (double) bass, and Philly Joe Jones is on the drums with arrangement by Gil Evans.
'Round Midnight was written by the great Thelonious Monk. This version by Miles Davis is one of the subsequent embellishments. (Lyrics were also added by Bernie Hanighen.)
*******

Next up, a really nice, uplifting light jazz piece ...
"Coconut Roads" by David Benoit along with Brandon Fields and Gary Herbig from Benoit's album Inner Motion (1990)
Alas, there doesn't appear to be any video that features lovely tropical imagery to accompany this song -- just this one posted by Benoit himself.
*******


And we'll end with something suitably Saturday night energetic ...
"Free Your Mind" by En Vogue from the group's Funky Divas album (1992)
The video is an orgiastic frenzy, the pulsating beat is captivating, and the lyrics are PC but in an uplifting rather than oppressive way (and they are likely to get stuck in your head, making them a great meme).
I still can't figure out who or what the framed drawing on the wall -- the freakish looking, hatted guy, eyes closed, mouth agape in a primal scream of some sort -- is supposed to be. The video ends with what looks like a stuffed monkey situated below the wall picture: 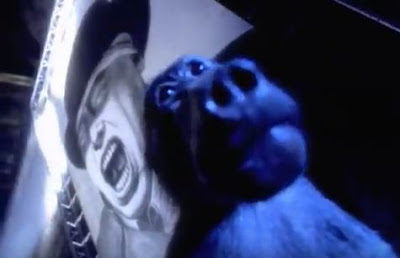 
OK, that's all for now. My next planned update will be late Monday or early Tuesday. See my previous entry for general update.
--Regulus
Posted by Regulus at 11:06 PM