In the Mist of this May -OR- A Wet Washington Weekend Walkabout: Sunday (and Late Saturday Night) Photo Recap 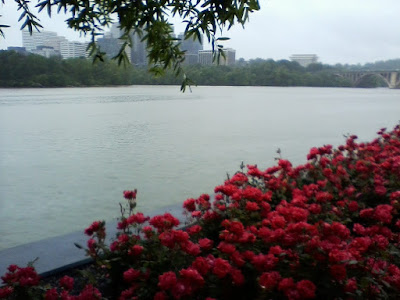 The Potomac River with some rose bushes along it and the Rosslyn skyline in the near distance as seen from the Georgetown Waterfront Park on a rainy spring day, 5:09PM May 22, 2016.
This entry contains a series of pictures that I took yesterday (Sunday) as I walked about in the light rain including a trek from Rosslyn back to Dupont Circle via the Georgetown Harbour waterfront and Georgetown itself.
******* 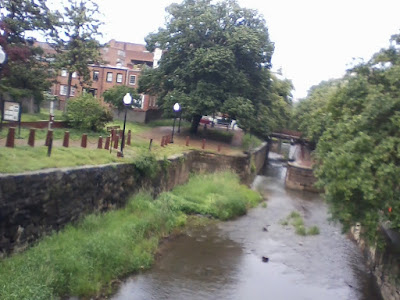 The C&O Canal as seen from Thomas Jefferson St NW in Georgetown, Washington, D.C., on a rainy day, 6:25PM May 22, 2016.
I couldn't decide between the image directly above and the first one which one to make the lead. I've opted to make it the "co-lead" picture. The remainder that follow are in chronological order.
*******


Because it was in fact a light rain, I was able to walk around without an umbrella -- but wearing a sweater over my shirt and an oversized hooded windbreaker over that with the hood up -- without getting soaked, just lightly wet. I also had on good walking shoes and corduroys, so I was OK. 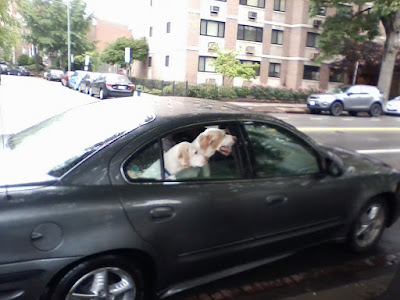 
So I have decided to switch up my gym nights this week from Monday / Wednesday to Tuesday / Thursday. This is partly because of the weather with a final bout of widespread showers and thunderstorms this evening -- and my desire both to enjoy that (likely to be the last hurrah of the current wet spell) and to avoid getting my laptop wet (recall that I take it home with me). 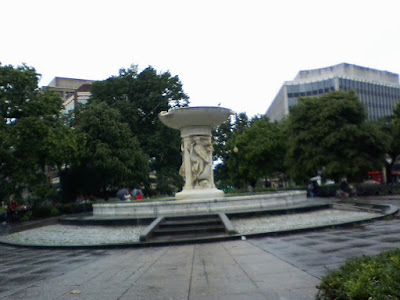 The fountain at Dupont Circle, Washington, D.C., in the drizzle and light rain, 3:37PM May 22, 2016.
I walked to the Dupont Metro but there was no sign of a train coming so I went back up the escalator and walked to Farragut West in order to get a train to Rosslyn.
*******


As for the weather, it features a cold-core closed upper level low centered near Norfolk continues to spiral about with abundant moisture and steep lapse rates. The low will slowly lift out late tonight into tomorrow, replaced by high pressure and the arrival of a more summer-like regime by the end of the week. 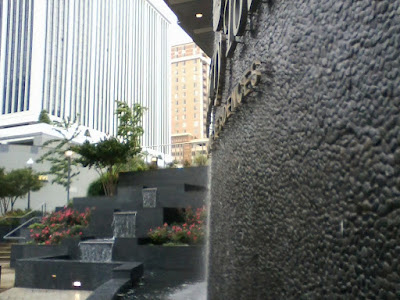 The Turnberry, Rosslyn, Va., 4:41PM May 22, 2016.
This skyscraper condominium is right next to where I worked for just under two months at my previous employer before it spectacularly collapsed and most of us ended up at another company. I didn't realize this wall was a fountain (since in February and March it was turned off).
******* The "Welcome to Washington, D.C." sign on the Virginia side of the Francis Scott Key Bridge over the Potomac, 4:50PM May 22, 2016.
Yesterday, I went to Rosslyn (Arlington) with the intention of walking back through Georgetown. I also went to the (small) Target on Wilson Blvd to buy a new pot to replace the one that I recently ruined because something burned in it. (Later at Floriana, D. asked incredulously, "You only have ONE pot??" That is correct.)
******* 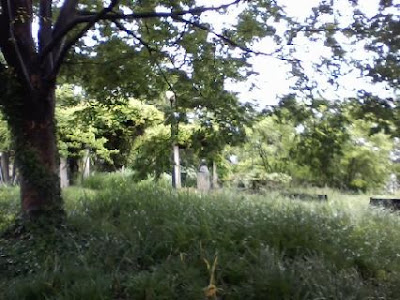 Francis Scott Key Memorial Park, Georgetown, Washington, D.C., 4:58PM May 22, 2016.
The moaning and groaning on the Capital Weather Gang site continues to reach new heights of aggravation for those of us who actually like cool, damp weather -- or at least not hot and horrible weather as is our D.C. custom from early May through late September, in particular because of the silly, self-entitled bourgeois sensibility it embodies that this has been the "WORST MAY EVER" for D.C. weather simply because it has been cool and wet. 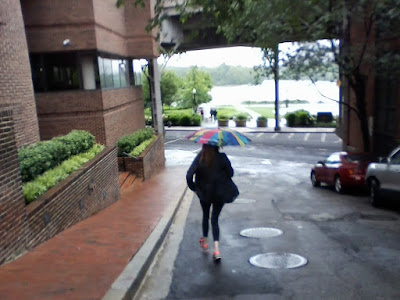 
For the record, below are the precipitation totals for yesterday (May 22nd) and the monthly, climatological seasonal, and yearly totals and departures through the end of yesterday for the main regional climate stations. "Normal" is based on the period 1981 - 2010.
KDCA


Interestingly, last year KDCA was exactly on its climatological mark for May 22nd at 14.77". 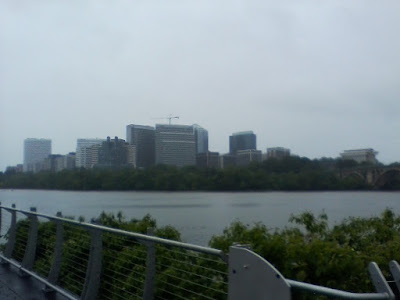 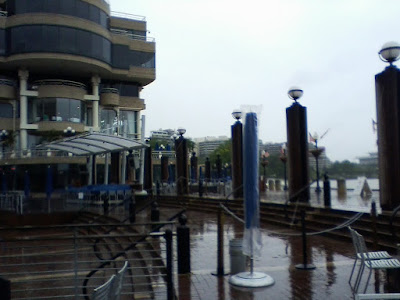 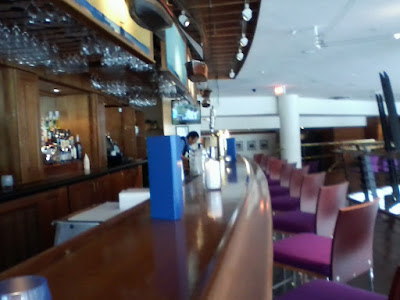 Upstairs bar at Sequoia restaurant, Washington, D.C., 5:18PM May 22, 2016.
I stopped at Sequoia restaurant and had a couple drinks and a shrimp cocktail at the bar. The place is nice but it ain't cheap. I could have gone to Tony & Joe's next door, but it was too loud and with Rhianna music blaring.
******* 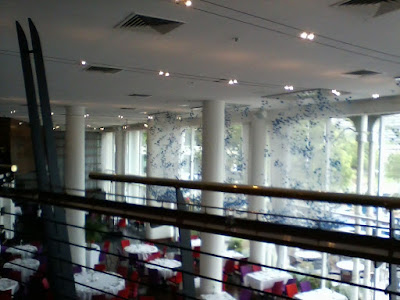 
Note: The normal and departure values for KDMH are based upon its partial climate record period -- which is still not quite 30 years (my best guess is that KDMH started in the late 1980s, so we're still several years away from the first 30-year normal, which would then be the 1991 - 2020 base period. 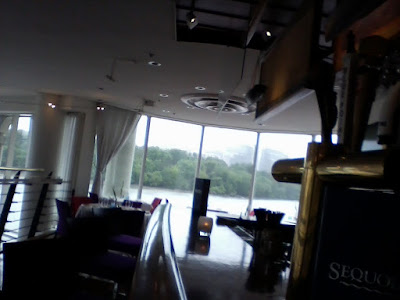 
Also, the reason KIAD and KBWI are above normal year-to-date this year while KDCA is not has to do with the shitty way that snow is tallied at the latter -- both its notorious undercounting of snowfall totals and the liquid equivalents for any given event. 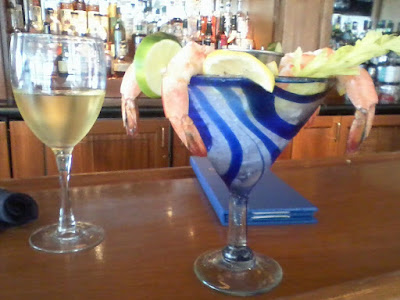 
As an update for this evening, I have finished the first part of a major work assignment but I really need to make good progress on the second part tomorrow. My plan is to work on it all day tomorrow and also after the gym tomorrow night. 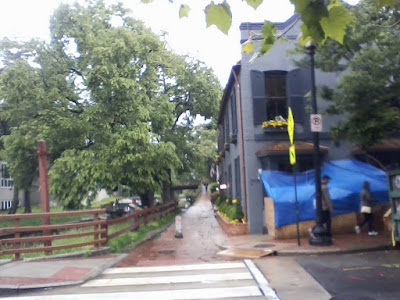 
Oh, yes, I would like to note that I was successful in my annual ritual of deferring my student loans -- this time using the general forbearance option rather than the forbearance due to excessive debt load. My sense is that I will finally have to settle up next year (June 2017), and I will try to get into the REPAYE option. 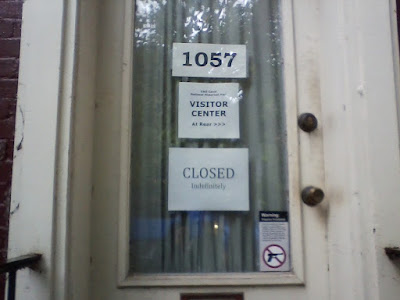 
Of course, if Donald Trump is president then, anything will be possible including actual debtors prisons and concentration camps. Getting that forbearance ensures my finances for the next 12 months, or rather, it removes having to start paying off a crushing debt burden.
Of note, I applied for the forbearance on Friday -- it took all of 5 minutes -- and I had it by Sunday morning. 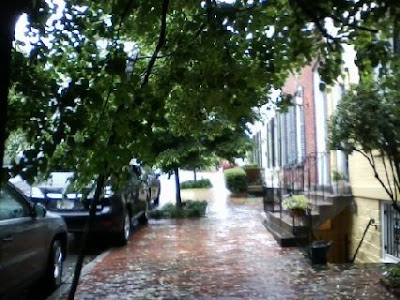 
OK, my next update won't be until later this week (possibly Thursday) although I'd be remiss if I didn't note a certain someone's birthday -- although the big 4 "Official End of Youth" 0 is still a year away. 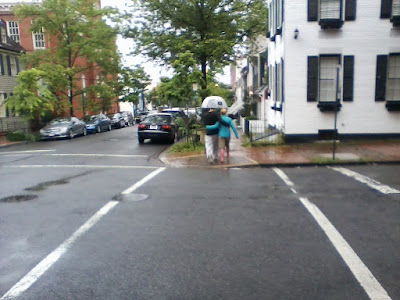 
Of the reasons I'm looking forward to 2017, that is one of the minor reasons. The major reason, of course, is the total solar eclipse of August 21st that I intend to see on the South Carolina coast (Chester -- what say you?)
Below are the remainder of the pictures from Sunday ... 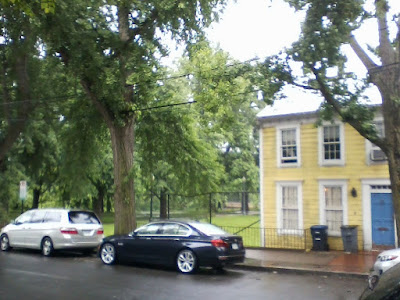 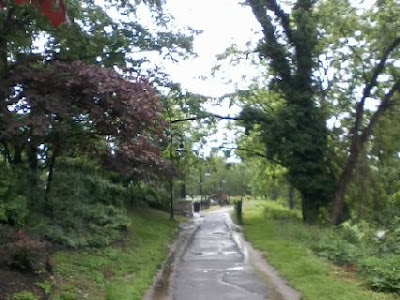 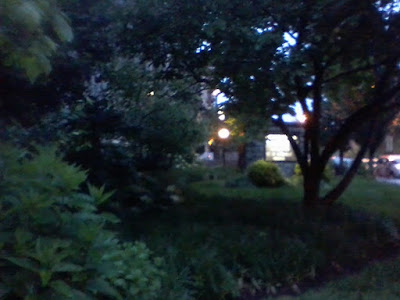 Wet and verdant shrubbery outside Foundry United Church, Washington, D.C., 8:20PM May 22, 2016.
The church is where Bill & Hillary Clinton attended when Bill was president. Assuming she wins, perhaps she will go there again. Otherwise, Foundry serves mostly as an outdoor homeless shelter even while the church is so embracing -- ALL ARE WELCOME -- that few people actually go.
*******


Oh, and here are few that I took late Saturday and in the wee hours of Sunday before and after my trek to Old Ebbitt Grill to the Old Bar, where I ended up in quite the enjoyable conversation with a 22-year old guy named Kyle from Tennessee visiting D.C. with his dad and uncles -- the latter corporate lawyers visiting here to win some award at the National Library of Congress.
I can't do the conversation justice and I'm not even going to try. 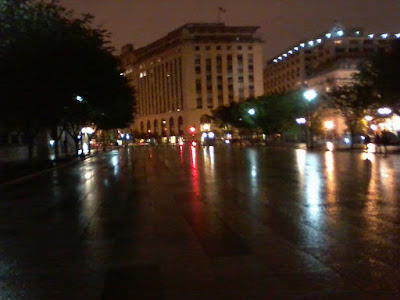 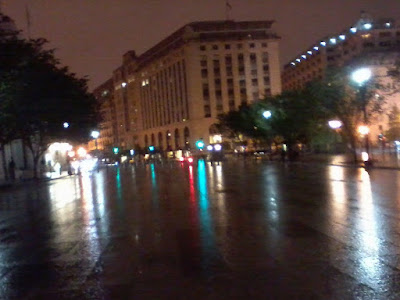 I also took this picture at just about the same time except the traffic light at turned green. I wasn't sure which image to post so I'm posting both of them.
******* 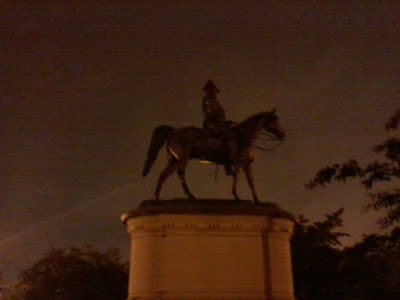 The equestrian statue of Gen. Winfield Scott at Scott Circle, Washington, D.C., in the wee hours of a drizzly, overcast, cool night, 3:00AM May 22, 2016.
I was walking home from OEG back up 16th Street. It's about a mile walk. I had stayed at the restaurant/bar until closing time in quite the conversation with Kyle. I was hoping he would keep in touch with me but that was probably a one-off meeting.
******* 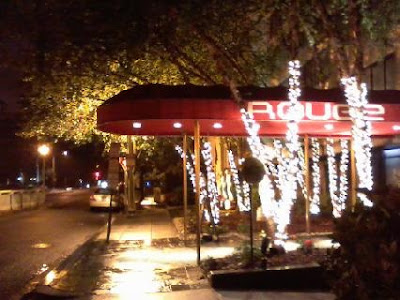 Outside Bar Rouge, 16th Street NW, Washington, D.C., 3:02AM May 22, 2016
I've never really understood that place. Perhaps because I went there once when the place first opened -- with a crazy guy, back when I was living in College Park -- and the prices were high and the (smelled up) men's room walls were covered (intentionally) in graffiti, except the guy I was with was convinced it was vandalism and proceeded to report it to the staff.
*****

Final picture (back to Sunday night) ... 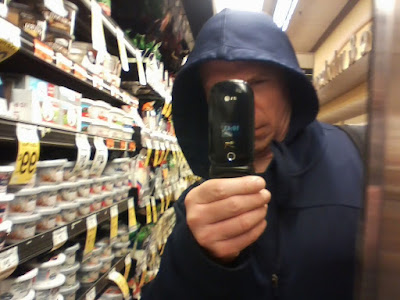 
OK, that's all for now. As I said, my next planned update probably won't be until the Wednesday or even Thursday time frame.
--Regulus
Posted by Regulus at 8:53 PM