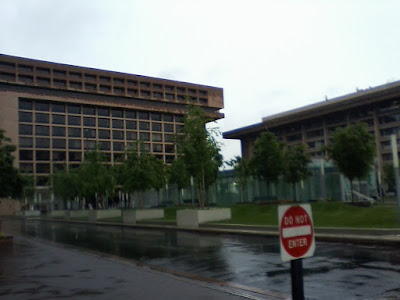 
It has been a very rainy day across the Baltimore/Washington region due to a cut-off surface low nearly vertically stacked with the upper level low has meandered ever-so-slowly in the presence of a North America-spanning omega block in the jet stream. 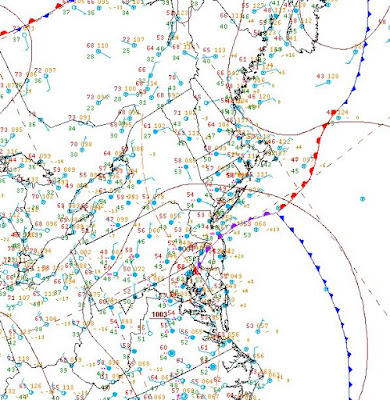 
12-hour rainfall amounts through 7PM tonight for the event (encompassing the whole event) have included the following: 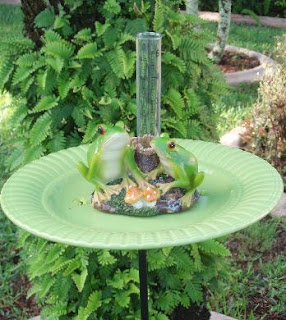 I'll have summary statistics for the month, season, and year in a subsequent entry. For the month so far, though, the three airport locations are running at or above normal. 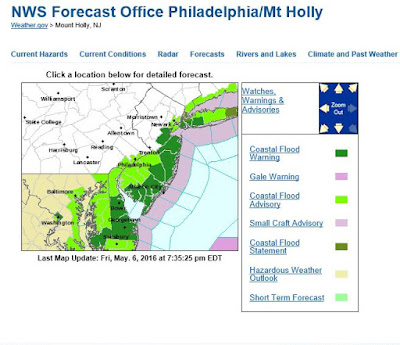 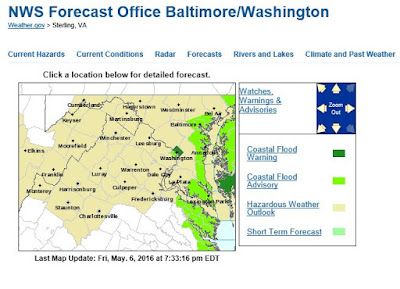 
The same continent-spanning jet stream omega block also features a deep trough located over the Western United States with a cold-core closed upper level low over Southern California resulting in somewhat out-of-season rainfall with scattered showers and thunderstorms in both the L.A. and San Diego areas.


The 2:44PM PDT area forecast discussion (AFD) from the Los Angeles / Oxnard (LOX) NWS office contains the following:
An unseasonably cold upper level low pressure system (558 DM with temps around -21 at 500 mb) continued to spin over L.A. County early this afternoon. Plenty of moisture lingered over the forecast area with mostly cloudy skies and plenty of showers and isolated thunderstorms, some with small hail and heavy rain.

San Joaquin Valley (HNX) NWS radar in standard base mode reflectivity looped between 446PM to 516PM PDT May 6, 2016.
This shows the flash flood warning areas inside the green outlines.
*******


With continued instability (12Z NAM sfc-based CAPE as low as 1257 J/KG over SBA County mtns), cold 500 mb temps, cyclonic flow aloft, and strong early May sunshine, the threat of additional showers and isolated thunderstorms will continue thru the rest of the afternoon into early evening over much of the region. PWAT values of around 0.85 inch is above normal for this time of year. Any further thunderstorms that develop will not move very fast, and there is the continued threat of heavy rain which could lead to flash flooding.
Yes, note that this AFD is not written in ALL CAPS -- a new policy the NWS recently undertook, although Sterling (LWX) continues to write its AFDs as such.
******* 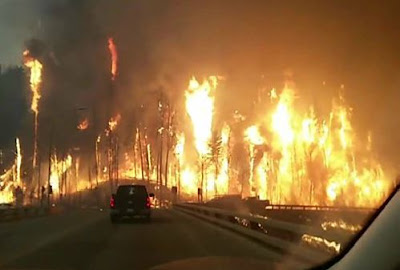 Screenshot of footage taken inside a vehicle showing the wildfire conflagration near Ft. McMurray, Alberta, taken in the past few days.
I wouldn't be driving toward that.
*******


Meanwhile, the record heat and antecedent dry conditions have resulted in a massive wildfire conflagrations in Alberta with Fort McMurray suffering catastrophic damage. Authorities report 1,600+ buildings have been destroyed including many homes. Much of the city and surrounding areas were evacuated. 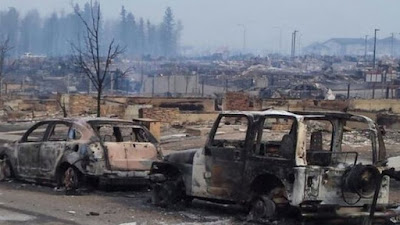 
It really is a horrendous situation with the fire reported 850-sq kilometers (330-sq miles) in extent. The smoke has billowed up into the rainless sky in apocalyptic-looking formations. Over 90,000 people have been evacuated. A few deaths have been reported so far -- specifically, those killed indirectly in car accidents while fleeing. 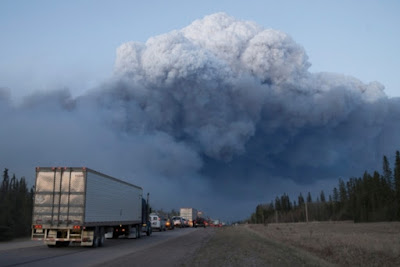 
The CWG had this entry showing the interior of a Fort McMurray couple's home burning down -- as captured by a security camera barely 20 minutes after they fled. I haven't actually watched the video. I don't really want to see it -- a family's entire lifetime of things destroyed, not to mention there are two helpless goldfish in that tank that die.


The smoke from the fires has entered the mid-to-upper troposphere and reached as far as the lower Mississippi River valley (see above GOES radar loop) and some of it has probably gotten wrapped up in the circulation of the mid-Atlantic cut-off low. 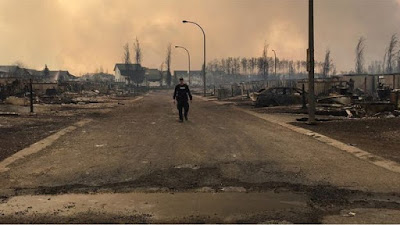 A policeman walks down the street in a post-apocalyptic-like setting of a neighborhood devastated by the wildfires in Fort McMurray, Alberta, May 2016.
*******


Returning to this area, the forecast for the D.C. area has conditions drying out tonight as the upper level low drifts eastward over the Atlantic Ocean and weakens, but another front is progged to reach the mid-Atlantic Saturday night followed by a pleasant day on Sunday with highs around 70F (which is a touch below normal).
A frontal boundary is then forecasted to get hung up over the area for much of next week with a chance of showers each day through Friday and highs around 75F and lows around 57F, which is more or less seasonable.
******* 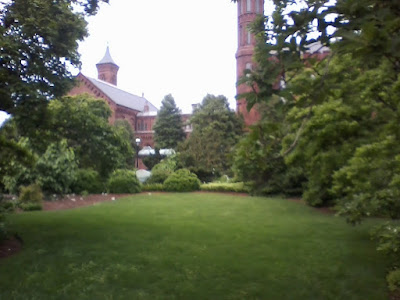 
Changing subjects, I'd like to direct your attention to a Jonathan Chait piece in response to an especially stupid Morning Joe panel discussion about how a third-party rightwinger candidate to run against presumptive Republican Party nominee Donald Trump would actually throw the race to the radical Republican-controlled House of Representatives due to the failure of any of the candidates -- including the hated Hillary -- to clear the 270 threshold. 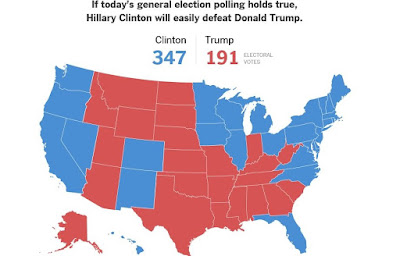 Electoral College projection of the 2016 election between Hillary Clinton and Donald Trump (1) based upon the results of the 2012 election, and (2) current aggregate polling trends.
*******


Here is the piece (link embedded): No, a Conservative Third-Party Candidate Can't Steal the Electoral College. 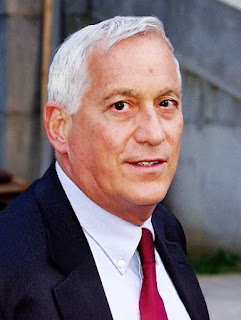 Guest Walter Isaacson declares, incoherently, during the discussion: "And I like the way you all came out on it." What a frickin' idiot.


Oh, and here is an excellent -- albeit depressing -- piece by David Roberts of Vox.com on how the media and larger "political ecosystem" of "consultants, power brokers, think tanks, foundations, officeholders, the whole thick network of institutions and individuals involved in national politics" will now seek to normalize Donald Trump in the upcoming general election race: Why the media will lift Trump up and tear Clinton down.
Excerpt:


Among all these classes of professionals, all these institutions, that whole superstructure of US politics built around two balanced sides, there will be a tidal pull to normalize this election, to make it Coca-Cola versus Pepsi instead of Coca-Cola versus sewer water. 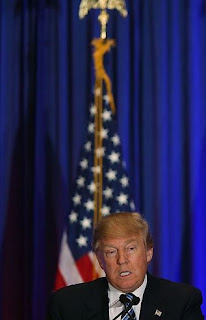 The US political system knows how to play the former script; it doesn't know how to play the latter. There's a whole skein of practices, relationships, and money flows developed around the former. The latter would occasion a reappraisal of, well, everything. Scary.

So there will be a push to lift Donald Trump up and bring Hillary Clinton down, until they are at least something approximating two equivalent choices. 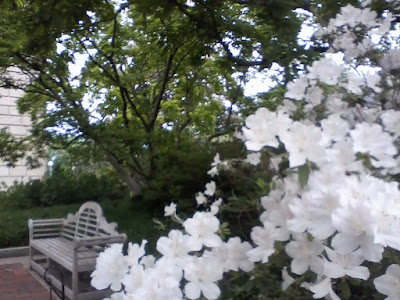 
I left work around 7PM last night and rather than taking the Metro, I walked to Elephant & Castle on Pennsylvania Ave., where it was crowded and the female bartender who served me kind of rude. I didn't tip her, but she had left anyway by the time I left, so it didn't matter.
I then walked to Trade, where I met up with Kristof and we had quite a nice night like we used to maybe 10 years ago. We seldom see each other now. Thereafter, we stopped into Stoney's for one drink as Howie was working. 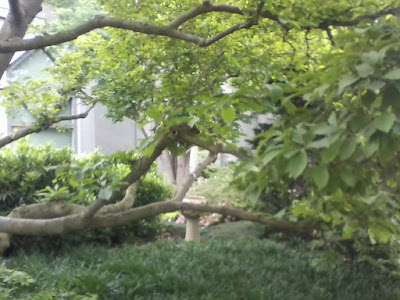 
It was an even nicer night because The Chipmungorilla was NOT there to hijack the entire night and turn it into nothing but the GaryWorld Show. He was probably busy pollinating his numerous social nodes -- or maybe just buying tangerines at the Giant. Either way, I was deeply relieved knowing he wouldn't be showing up. 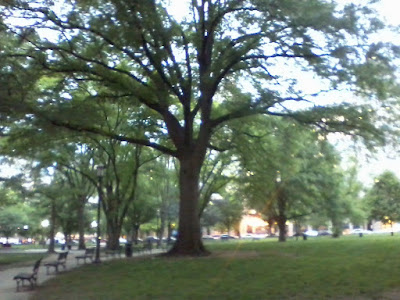 Franklin Square, Washington, D.C. 7:40PM May 5, 2016.
This square is filled with homeless people. The new digs of the Washington Post -- a.k.a., Neoliberal World Order Central -- is directly across the street, so Fred Hiatt can stare at it dreamily while thinking Washington Consensus-canonical BIG EDITORIAL THOUGHTS to please the oligarchical overclass.
*******


I got to bed around midnight and had a night sleep filled with roiled dreams that were set in some weird hybrid combination of Washington, D.C., 50 years and nearly 1,300 years from now. It was not a gay place anymore, although there were lesbian places and lots of weird hipsters.
In terms of the dream-setting year, it seemed to be both about 50 years and nearly 1,300 years (1,271 years to be exact) from now. 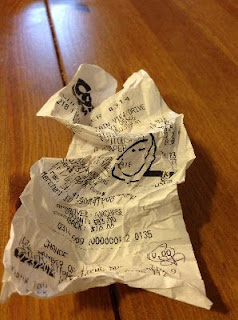 Why? Because on the one hand, this man I was talking to was aware that there had once been gay bars but that they all disappeared in his lifetime and the city no longer had any gay men in it; but on the other hand, a crumpled and somewhat illegible receipt I found had a date of May 3287.

I'm sure there won't be paper receipts then. 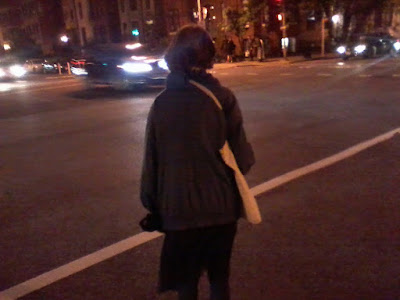 
For today, I had a good day at work -- talking to someone at the CPUC who managed to answer all my questions about California's under-development policy treatment of EVs as a type of DER that could supply power to the grid with compensation tied closely to the CAISO (pronounced "Cal-EYE-So") wholesale electricity market. 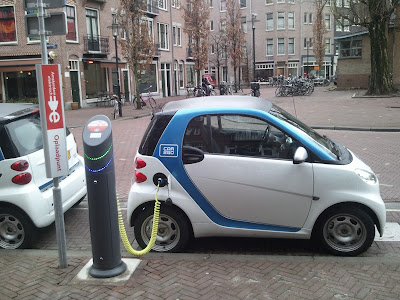 This is a very cutting-edge subject that is really only in California. Mississippi will get there in, oh, about 1,271 years...
I need to spend some time this weekend writing up the notes I took during that very successful cold call. This is for a presentation at an upcoming conference in NREL (no, I'm not going or presenting, just doing the background research).
For tonight, I dunno -- I guess just Trade and maybe Floriana. Tomorrow is a gym day and Sunday my one free day to gad about. I have no real plans this weekend.
My next update will be tomorrow night with the jukebox Saturday night entry. I probably won't post an antecedent Saturday evening post update since I've sort of said everything I want to for the time being.
--Regulus
Posted by Regulus at 9:39 PM