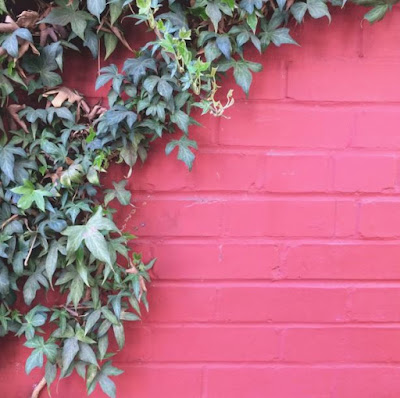 A brick wall with leaves (ivy of some sort, I presume), 15th and Swann Streets NW, Washington, D.C., April 1, 2016. Photo by Peter Bjork via Flickr.
This image is featured in the CWG entry linked below.
This entry features some pictures from the Capital Weather Gang pool on Flickr. Each one is credited and sourced.
*******

Sorry for the lack of updates ...


I went out both Thursday night and last night, getting too drunk, and by the time I walked home, all I could do was go to sleep. Last night, my long-time friend Mike G. came into D.C. from his suburban Maryland abode (he and Chester, another friend from my meteorology grad school days, live close to each other in Howard County).
We went to dinner at Baan Thai, then had drinks at Trade, and then a night cap (or two) at Floriana -- at which point things sort of sunk into a haze. I had a fair amount more than he did -- plus he is Russian, so he has a natural ability to drink and function well. I do not. 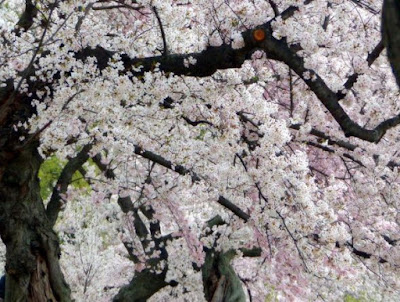 
This was a case where his wife and young son were away, so he came into D.C. to see me. This is really the only time I see my straight, married with children friends. (As for the group around Wall-P, I never see them nor do I want to.)
I had a good multi-part gym workout this afternoon. I was quite sore -- especially yesterday -- from that "Instinct" course I took on Wednesday night at my YMCA. Oh, yes, my weight was 146.8 pounds, so I guess I'm pretty much back to where I was after the blip up to 149 pounds.
Work is fine, although I'm behind on one assignment. I'm very happy at the new company. I also realize how lucky I am to have gotten this job -- and made such a nearly seamless transition given the chaotic, ugly situation at my previous job. 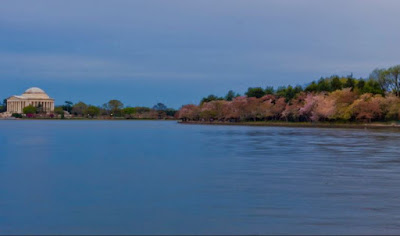 
As an update to that situation, the old company failed to pay any of its former workers (including myself) what is owed. Pay day was supposed to be yesterday. Not only that, but the bankruptcy case has devolved into a weird farce with a sort of revolving door of people claiming to be in charge of the shell parent company and the fired ex-CEO apparently planning on returning, battling preferred shareholders (of a totally worthless stock), and monies being held hostage by the head of one of the subsidiary companies that was illegally sold the other day. 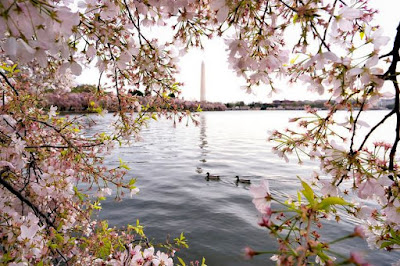 
The U.S. bankruptcy court in Alexandria is converting the case from a Chapter 11 to a Chapter 7 because whoever is in charge failed to file the proper paperwork. The trustee told two former coworkers who showed up at a 341 hearing that he had never seen a case quite like this one.
The money owed me and my former co-workers is from one of the subsidiaries that is in bankruptcy. While nearly all of use jumped ship to the new company, a few folks did not for various reasons, and I'm not sure their situation. 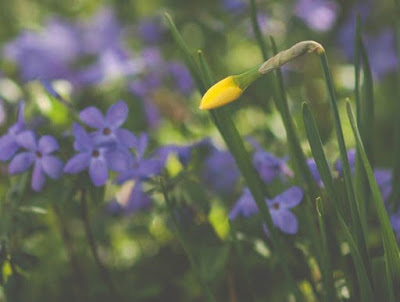 
However, yet another subsidiary -- this one based in the Denver area and that provides office support --  is going into bankruptcy and all those workers (about six people) were summarily terminated yesterday ("canned," in the words of one of them who is my friend in a text she sent me).
Both my group and that group are planning an assortment of legal and administrative actions (the latter involving the Department of Labor and the state-level counterparts). I'll probably also contact the IRS.

I'm actually owed 60% of a pay check plus about 10 hours of leave time -- so about $1,200 after taxes. I sort of doubt I'm ever going to see that. There are also 401k issues -- the company was illegally using the EMPLOYEE contributions to pay the employees, which means our W-2s for 2015 are screwed up (and I doubt we're going to get any forms for 2016).


It's a real mess that will be tied up in litigation for years. At least two individuals with senior management probably have engaged in criminal wrongdoing.
Unfortunately, at least for now, I cannot reveal the names of the companies involved because they WILL be google searched.
Turning to the weather ...


It is going to be dramatic whip-saw over the next four days ...
For starters, a powerful cold front is progged to blast across the mid-Atlantic region later tonight with possibly rain squalls and very gusty winds -- up to 55MPH in the immediate D.C. NWS zone. This front will usher in a chilly, blustery day tomorrow with highs not even reaching 50F. It then warms up on Monday with the next weather system with another strong cold front and sharply lower temps. for at least Tuesday (highs forecasted only about 45F), followed by another warm up. 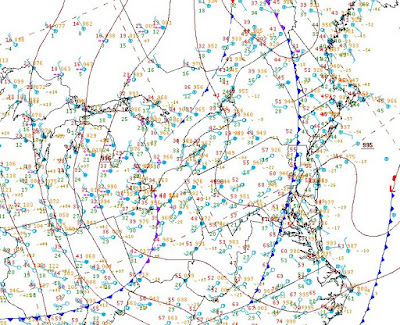 
However, the actual weather advisories now in effect as issued by Baltimore/Washington NWS forecast office (i.e., "Sterling" since it is located in Sterling, Va., and abbreviated "LWX"), are a case study of the overly legalistic and incredibly annoying approach that the meteorologists there employ, in this case, not surprisingly, none other than "WOODY!" himself. 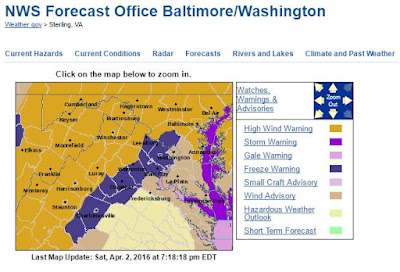 
As shown in the above image, there is a high wind warning for a broad swath of the Baltimore/Washington area including Baltimore itself and the northern and western suburbs of Washington, D.C., but the inner suburbs, D.C. itself, and points south and east are just under a "wind advisory" -- presumably because the "threshold criteria" for a wind warning will be missed by 1MPH or 1-minute duration too short of a duration.
Yes, oddly, Anne Arundel County is in a high wind warning. Meanwhile, on the Eastern Shore -- falls under the Mount Holly/Philadelphia NWS forecast office, there are high wind warnings (see image directly below). 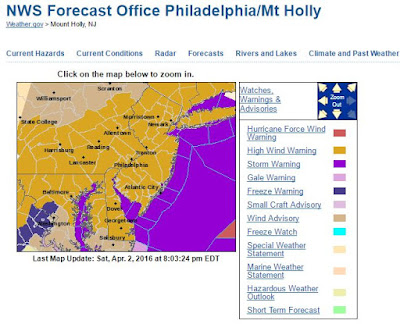 
In general, the Mount Holly and New York NWS forecast offices, have no such overly legalistic and formulistic approaches in these situations, resulting in an odd and confusing bifurcation of the big population centers between different weather advisories in a potentially dramatic situation.
In short, tonight is a classic example of why I just don't like the LWX crew's approach to weather forecasting. 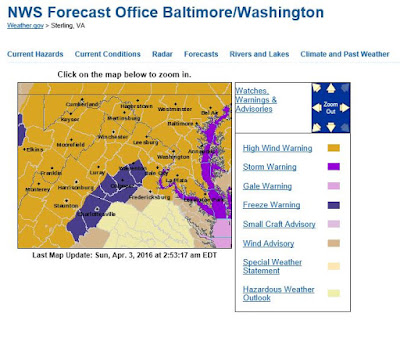 
At some point in the past six hours, the high wind warning was expanded to include the immediate D.C. area including the District itself, as well as Charles, Calvert, and St. Mary's Counties. The Sterling (LWX) discussion hasn't been updated since about 830PM, so I can't tell if it was WOODY! himself who issued the expanded warnings or another forecaster on duty.
I'm home now after an interesting night ... I went to Floriana, where I had two drinks and watched the rather riveting movie "The Edge" before going to Old Ebbitt Grill Old Bar, where I had a really nice time talking to someone (more on that in a subsequent entry). I then walked to Trade, but it was too loud, and then headed home. ' 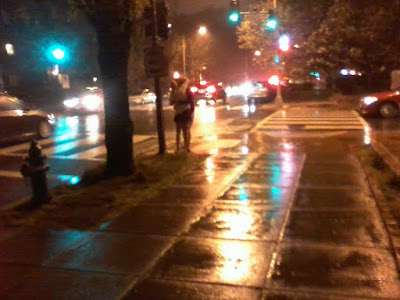 
There were rain squalls earlier, though amounts were light -- only 0.03" at KDCA, 0.01" KBWI, and 0.03" at KIAD in a three-hour period -- but now it is just really windy with gusts approaching 50MPH hitting my windows. It looks like there might be a few more rain showers to come through, as well.
I'm going to sleep now.
End of Update.

Looking ahead, next week is going to be a bit dicey in terms of being able to post much before late Wednesday or early Thursday. I have to attend a DOE conference in a hotel way out around Dunn Loring on Monday, Tuesday, and Wednesday, and it starts early each day.
For tonight, I'm not sure what I'm doing. Andrea invited me to meet up with her, Imara, Jake, and Jake's brother (who is visiting from Indiana). I'll probably go to Trade at some point. 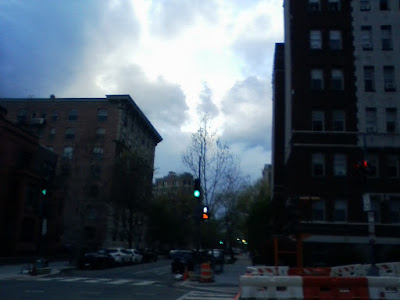 
For tomorrow, I am going up to Columbia Heights to a co-worker's apartment where at least a dozen of us are meeting -- all former employees of the collapsed company who were brought onboard by the other company a couple weeks ago -- to discuss the situation described above.
Right now, I'm finishing up several loads of laundry. The new washing machines are a pain in the ass, but I'll relate why another time.
I'm going to try to post a jukebox Saturday night entry but I don't really know what songs to feature.
--Regulus