Jukebox Saturday Night for April 9th, 2016: The Autumn-in-April and All Over the World Edition

Given what a cold and blustery night it is -- hardly April-in-Washington, D.C.-like at all -- I think it appropriate to start with this wonderful piece ...
"Autumn Leaves" by Cannonball Adderley from the album Somethin' Else (1958)
"Autumn Leaves" itself is an older song -- composed in 1945 by Joseph Kosma with lyrics by Jacques Prévert and released under the French name "Les feuilles mortes." It has been covered by many artists over the years -- including in a jazz incarnation.
This version by Cannonball Adderley subsequently appeared on his 1975 album also called Autumn Leaves.
*******


And let's end with something really fun and Saturday night energetic and upbeat ...
"All Over the World" by Electric Light Orchestra (ELO) from the group's movie soundtrack album Xanadu (1980)
This video features a number of "flash mobs" doing choreographed dance routines to this song. Now given that they are choreographed, I don't know if that qualifies as a "flash mob." Also, I've no idea when and where all of these were filled -- although one is in London outside Buckingham Palace -- and if in fact the music playing was this ELO song (I assume it was).
I last featured ELO just over three years ago in this entry in my predecessor Friday Night Musical Interlude series in the form of the group's song Mr. Blue Sky with a wildly psychedelic and very enjoyable video. 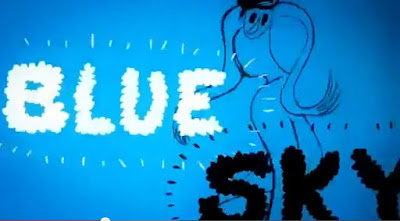 For some reason, that song reminds me of MV. Not sure why -- it's the cartoon drawing of Mr. Blue Sky doing his wild, happy dance.
OK, that's all for now. I will try to update the blog tomorrow early afternoon, otherwise it won't be until late Monday / early Tuesday.
--Regulus