Show Me the Money -OR- Getting the Zimbabwe Treatment 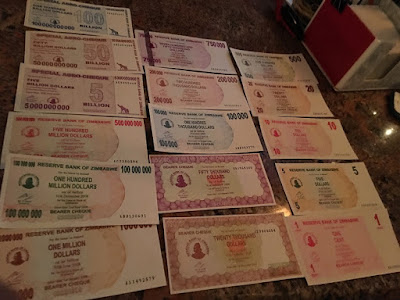 
Once again, apologies for lack of updates.
While I brought the computer home last night, I did not go to the gym but rather had a post-work bar night out. I first went to Continental Pool Lounge in Rosslyn (which is in the same building as where I work) with some co-workers. This was after some important company news that was, on balance, a relief. Everyone at the company should get paid on time tomorrow.
Later, I met Mark D. at Logan Tavern where we had a nice dinner at the bar (although he is not drinking liquor during Lent). We were going to go to Baan Thai but it was too crowded.
Thereafter, I went to Floriana, where I had a really fun time including seeing a collection of African money, most notably, all those Zimbabwe dollar bills that reach up to fantastical denominations -- a la Weimar Germany. (Actually, the Zimbabwe dollar apparently is no longer the country's official currency. Other national currencies are instead used.)
The lead image to this entry features a picture that another patron took and (upon request) sent to me.
What I don't get is how Zimbabwe had a 1-cent paper bill. That makes no sense (no pun intended). But you can see how the bills run up to 100 BILLION Zimbabwe Dollars. That's a factor of 10 trillion difference.
These bills actually have expiration dates on them (the ones above were at the end of Dec. 2008).
As Paul Krugman never tires of point out, on the hard-money, return-to-the-gold standard, austerity-for-all-but-the-0.1% overclass Republican kooky right, Zimbabwe-style hyperinflation is always around the corner and yet never materializes in this age of global oversupply and deflation. He has referred to it as getting "the Zimbabwe treatment."
OK, I'm going to the gym tonight. I intend to update the blog when I get home.
--Regulus
Posted by Regulus at 6:33 PM