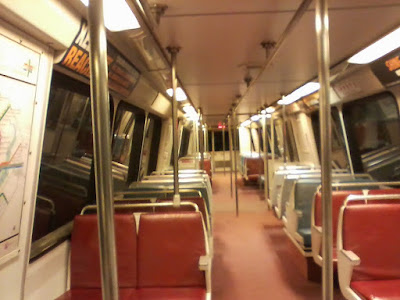 Metro rail car 5002 pulling into the Rosslyn station, Arlington, Va., 10:15AM March 9, 2016.
I was alone in the car through the three station stops.
This morning's commute was probably the easiest one I've had: I got an S4 bus down 16th Street to K Street (rather than walking nearly a mile down 17th St. to McPherson Square), immediately caught an Orange Line to Rosslyn, and got to work in 28 minutes, about 10 to 12 minutes shorter than usual.
*******


This is just a short morning update.
I really need to be workwise productive today despite the dire financial situation at the company. (It may not survive, and even if it does, my job might not. Furthermore, finding a new job is such a damn difficult process for me. I'm not like some of my friends -- yes, you BK in NYC -- who can leap from job to job on a steadily upward income and professional trajectory.)

Of course, the PC thought police, Bernie Bros, and amateur and professional Hillary haters over there and on MSNBC won't be laughing when Bernie Sanders loses in a crushing defeat to Donald Trump in a chaotic, venomous, multi-candidate general election in November.


However, she had a blowout victory the Mississippi Democratic primary (thus continuing her string of such lopsided victories in Southern state Democratic primaries): 82.6% to 16.5% (182,282 to 36,284 with nearly 100% of the vote in).
Delegate-wise, last night was a wash since the races were not winner-take-all -- which means she is still well ahead in the delegate count. 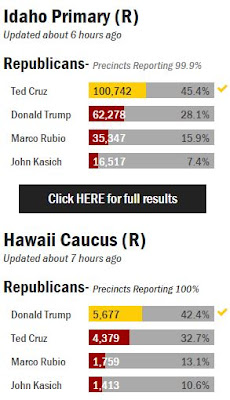 On the Republican side, the Danse Macabre continues apace as the Donald Trump blitzkrieg of the GOP continues.

Little Marco Rubio -- the Great GOP Establishment Hispanic Hope -- again won nothing and is running out of options.


Trump won in Michigan with 36.5% of the vote (a bit lower than I would have anticipated) to Cruz's 24.9% and John Kasich's strong third-place showing of 24.3%. (Kasich's last stand is in his home state of Ohio next week just as Marco Rubio's is in Florida.)
As a personal update, I met a former coworker and friend last night at Trade where we talked about my job situation. Thereafter, I went to No. 9 to watch the election results come in -- torturously slowly, especially in Michigan -- until Gary and Howie showed up. Later, I went to Floriana for a bit before heading home.
The weather today is sunny and too goddamn warm for early March with highs around 80F forecasted today and tomorrow here in D.C. I'm sure they are all thrilled at CWG -- another website I'm boycotting this week. 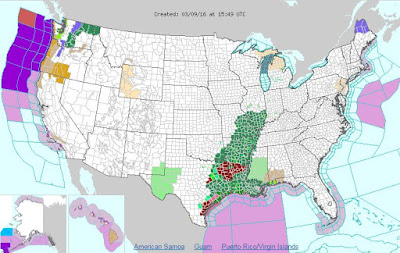 
There is lots of rain in the lower Mississippi River valley and Gulf coast but a massive early-season Bermuda high anchored offshore is holding that at system at bay for the time being. The weekend and next week looks to be cooler with a chance of rain.


Tonight is a gym night. I'll try to update the blog after that.
--Regulus