Let's start with a really smooth jazz piece by our friends that make up the group Spyro Gyra ...
"Harbor Nights" by Spyro Gyra from the group's Incognito album (1982)
This video contains some nice still images of various city harbors in the evening and at night (five in all, none of which I immediate recognize -- well, maybe the fourth one, which appears to be Hong Kong).
*******

Let's continue the smooth jazz mood but pick up the energy a bit ...
"Street Beat" by Richard Elliot from his "After Dark" release (1994)
Here is Richard Elliot's website.
*******


And now for something Saturday night upbeat ...
"Easy Lover" by Philip Bailey and Phil Collins on Bailey's album Chinese Wall (1984)
The song later appeared on Collins's album Serious Hits... Live! (1990) and his ...Hits compilation album (1998).
The video to this song is a bit weird, although the helicopter flyovers of London show how radically that city has changed (primarily for the neoliberal world order worse).
*******


As the briefest of updates ...
I was going to post a Saturday Evening Post series update to proceed this entry, but I just don't feel like it. I'll try to post an update tomorrow early afternoon before heading to Quill's parents' house in Silver Spring for Easter Sunday dinner. It is probably the only time I'll be there this year, esp. if that Thanksgiving-time Dominican Republican trip with my dad comes to pass. For Christmas, I'll visit my mom.
I will say that I had a very good gym workout this afternoon -- the usual multi-part, approx. 3-hour routine. This followed a Friday night of much too much drinking (more on that in my next entry). For tonight, my plans are just the usual (Floriana and Trade), although I think I'll get dinner at Logan Tavern. 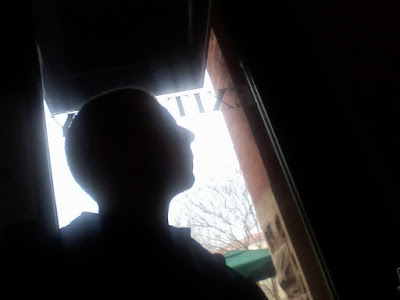 Yours truly in the Starbucks at 325 7th Street NW, Washington, D.C., 11:05AM
I took the bulk of the day off yesterday (immediately going negative on my time off balance in my new job). However, while I went to the dentist, I did not meet my mom as she cancelled coming into D.C. (for good reason, as I'll explain in my next entry, but basically, too many goddamn tourists here to see the cherry blossoms).
*******