Getting Back to Normal, Blogging, Spreadsheets, and All -OR- A Tree Grows on 12th Street 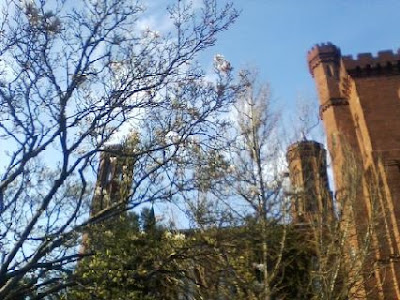 Smithsonian castle from the Enid Haupt Garden, Washington, D.C., 6:11PM March 23, 2016.
I walked home from work on Wednesday -- stopping at Baan Thai, Trade, and Floriana along the way and not actually getting home until 1130PM. The pictures in this entry were taken on the walk to the Thomas / Logan Circles area.
*******


So good news -- my new laptop works fine at home in terms of internet connection and pretty much everything else. It is also a Dell laptop, so my old charger (which I forgot to return with my computer) works (to be clear, I left my new charger at the office this evening). Also, the (fraying) ethernet cable works between the laptop and the RCN modem. (I need a new one of those.)
I have Explorer, Chrome, and Firefox on this computer. Henceforth, I am going to use Firefox to post my blog entries (as I used to way back when), so the formatting of font types and sizes as well as spacing will be based on that rather than Internet Explorer. The colors are based on how they look on this computer. 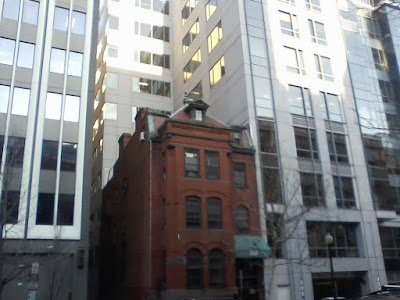 The 1000 block of 12th Street NW, Washington, D.C., 6:36PM March 23, 2016.
Yes, that is our old favorite, the apparently forever-abandoned Zion Building (the name on the ancient and barely legible building directory) that I've pictorially featured and mentioned on this blog multiple times over the years. (I'm too tired now to find links. Just do a search on "Zion Building" in the search box.)
*******


I was also able to download onto this computer all my personal files from a flash drive including the 6 years' worth of Excel spreadsheets I have to track my actual versus planned expenditures that I make daily except on rare occasions (such as being away).
Actually, I had not created a spreadsheet since all the chaos erupted last Friday with not getting paid. Tonight, I was able to redo it. I assumed that I will NOT get paid the partial paycheck that the former employer owes me and I assumed a very partial paycheck for the first pay period from the new employer. 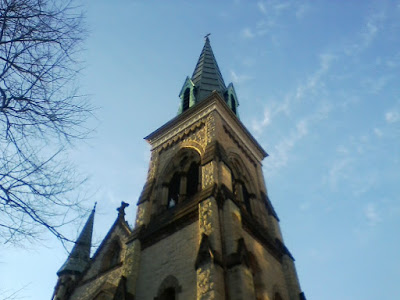 
Earlier, I went to the gym and had a good multi-part workout featuring the usual components (jog, weightlifting, core, and swim). I was there for a bit over 3 hours. That's so much better than my post-work bar visits, which invariably are anywhere from mediocre to awful.
I'm so tired right now that I can barely keep my eyes open. I'm not even going to try to post more than a handful of (topically unrelated) images.
For tomorrow, I'm working on a partial day (and despite the fact I have no vacation time accrued as of yet). I have a dental appointment in the morning and then I'm meeting my mom at Thunder Grill for lunch. Also, there is a happy hour at the NPC tomorrow evening for all the employees (my co-workers) who jumped to the new employer (the prime contractor).
There is a lot to talk about. 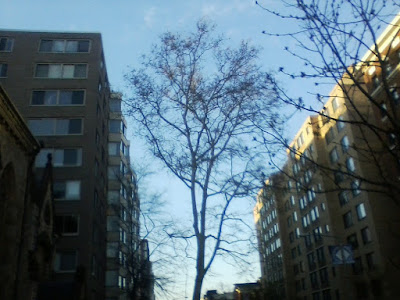 A ginormous, aging sycamore tree, 1100 block of 12th Street NW, Washington, D.C., 6:39PM March 23, 2016.
This tree -- which you can see from about a mile away on the National Mall at 12th Street looking "uptown" -- grows just outside Horizon House apartments run by the D.C. Housing Authority for poor senior citizens and the disabled. (That being the case, the place is about what you'd expect it to be.)
*******


I am deeply chagrined that one client support group from the old company failed to make the jump -- one of whom is a friend of mine. This group is actively resisting, probably out of a mix of fear and suspicion that is being stoked by the old employer's senior management (or what's left of the senior management plus the new shady characters brought in to keep it going). Those positions are going to be back-filled by early next week regardless.
I've explained this multiple times -- not to mention the fact that the bankruptcy case involving the shell of a parent company has devolved into a sort of tragi-comedy whereby the court-appointed trustee has filed a motion to convert the case from a Chapter 11 to a Chapter 7 because of the failure of anyone to file the appropriate paperwork.
However, I just can't through and my admonitions are probably just increasing her resolve. I don't get it.
What was funny-poignant was to get an invite (on my DOE email!) to an in-office happy hour at the old company where wine and chocolates are being provided -- even as the Titanic (or maybe the Lusitania) sinks. 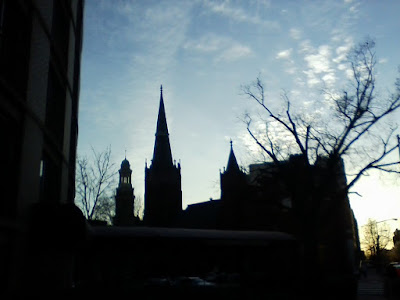 Dusk as seen from the 1300 block of N Street at Vermont Avenue near Thomas Circle, Washington, D.C., 6:45PM March 23, 2016.
The silhouetted church is Luther Place Memorial Church. The small grounds of it once were basically prostitute central back in the 1980s and 1990s, less so in this gentrified age.
*******


Anyway, I'm not taking the computer into work tomorrow but will use the loaner one there.
OK, that's all for now. My next entry likely won't be until Saturday evening in the form of a jukebox Saturday night entry (and perhaps an antecedent Saturday evening post update).
--Regulus
Posted by Regulus at 1:51 AM