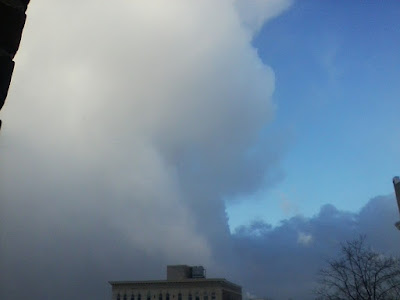 A low-topped convective cumulus cloud (dare I call it a cumulonimbus?) associated with a snowsquall that crossed the District of Columbia this morning as seen from my Hampton Courts apartment looking to the west-northwest, Washington, D.C., 8:04AM February 13, 2016.
The weather doesn't startle me in D.C. very often. This morning was different.
*******


Follow-up note to previous entry: OK, Yahoo mail is working again in that I can download pictures that I take with my old flip-open cellphone and then email to my Yahoo account. This is just a brief pre-gym entry. (I must get to the gym today -- more on that below.) 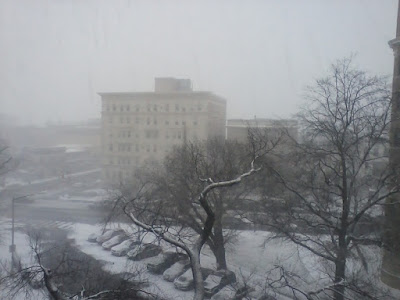 The snowsquall that greeted me this morning as seen from my 5th floor Hampton Courts apt. looking toward the intersection of 16th and U Streets and the Balfour, Washington, D.C., 7:54AM February 13, 2016.
*******


So this morning something that almost never happens in the present era in Washington, D.C., happened, specifically, I woke up to an unanticipated heavy snowfall. It was a snow squall associated with the actual energetic Arctic front blasting through the mid-Atlantic. (The NWS had mention of snow showers and snow squalls in the forecast, so it wasn't a "bust" -- I want to be clear about that point.)
To reiterate, the weather doesn't startle or surprise me that much in Washington, D.C., but this morning was different. 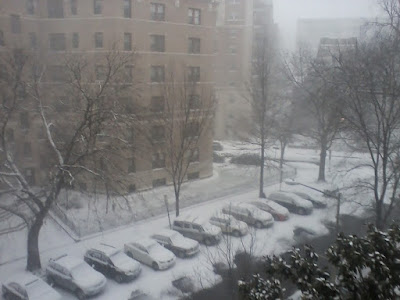 
Not only that, but the snow squall was a very localized one -- a streamer coming in from the northwest that set up briefly right over the District and portions of Montgomery County, Md. The radar was otherwise clear but for it:

The Sterling (LWX) NWS radar in composite mode looped from 7:15AM to 7:51AM February 16, 2016.
I chose the composite mode since it showed the snowsquall streamer a little more clearly but was not significantly different from the base reflectivity mode loop.
*******


It resembled nothing so much as a lake effect snow squall coming off Lake Erie or Lake Ontario. Indeed, I wonder if they streamer had any upstream connection to the Great Lakes. (In general, the lake effect streamers can on certain occasions follow a trajectory into the Alleghenies and Blue Ridge where the terrain can reenergize them, but they invariably collapse in that last bit of down-sloping to the coastal plain.) Most likely it was simply the tremendous surge of cold air and associated dynamics that created these snow squalls.


There were actually two squalls between about 715AM and 830AM here in the District. I woke up about 745AM and saw that it was snowing heavily. I would say a quick 1/2" fell, but it blew around so much that it is hard to tell what's a real amount (and, of course, I've no doubt National Airport (KDCA) will come in with the usual Mark Richards-approved "TRACE" amount). 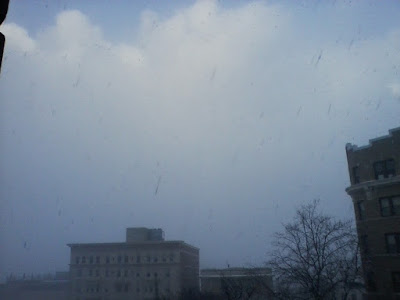 A somewhat blurry picture of the first snowsquall and associated clouds as it was ending as seen from my apartment, Washington, D.C., 7:59AMK February 13, 2016.
*******


There was actually a winter weather advisory in place for the entire Baltimore/Washington last night for snowfall between 11PM and about 3AM, but that never materialized, at least not here in the District. By the time I got home, the sky was starry, although there were some clouds moving in from the northwest. 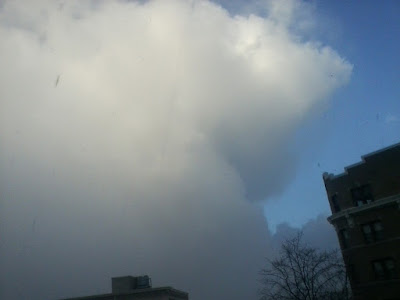 Another view of the low-topped convective clouds producing this morning's snowsquall as seen from my apartment, Washington, D.C., 8:02AM February 13, 2016.
*******


The big story today and into tomorrow is the brutally cold air and surging winds. It is 21F at KDCA at the 1PM hour with winds at 18MPH gusting to 30MPH and a wind chill of 6F. Sterling (LWX) finally issued a wind chill advisory early this morning for much of its county warning area including the Metro D.C. and Baltimore areas. 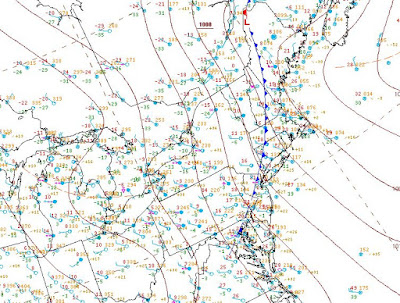 Northeast U.S. portion of the NWS high-resolution surface weather map valid at 15Z (10AM EST) Feb. 13, 2016.
This shows the Arctic front blasting across the northeastern U.S. stretching down to the D.C. area.
*******


About having such a wind chill advisory, I wrote the following in the entry last night that I was not able to post. The context is that Sterling had not been put up for our area even while Mount Holly/PHI had one for its entire CWA including its Maryland Eastern Shore counties, and earlier in the day, the meteorologist-on-duty had written this long-winded area forecast discussion about how close we would be to advisory criteria but not go over it.
I wrote the following (yes, I'm quoting myself):
There SHOULD be a wind chill watch in place as there is across New Jersey and even on the Delmarva in Mt. Holly's CWA (forecast area). However, Sterling (LWX) is maddeningly over-legalistic when it comes to heat and cold advisories of any sort, so you get these ridiculously area forecast discussions in which the meteorologist on duty goes on and on about how the Metro D.C. and Baltimore areas will get OOOOOH so close to advisory criteria but just not make it. 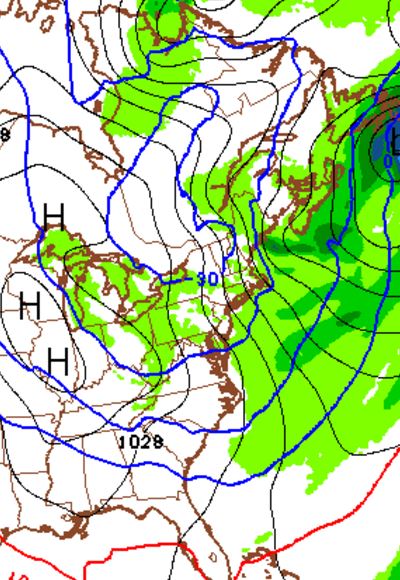 
Goddamn it, it's going to be frickin' 23F for a HIGH tomorrow and the low tomorrow night of 10F in D.C. itself with winds gusting to 40+MPH -- sending wind chills to below zero. The overhead 850mb temp. is going to crash to -25C. It is a dangerous situation and Sterling thinks it's doing its job by holding off on a wind chill advisory in its CWA that is almost coterminous with the entire Washington/Baltimore Combined Statistical Area in which live 9.3 million people -- and it is doing so because the wind chill might only go to -4F rather than the LWX region criteria value of -5F. (At -20F or lower, it is a wind chill warning.)
Stupid.


As an update, Sterling in fact issued a wind chill advisory and it joins the one in effect for the entire Mount Holly (PHI) CWA and wind chill warnings in other places.

Oh, and if you're wondering, yes, it is important because these weather advisories get the attention of the media, local governments, and the public -- and set in motion contingencies and activities that can save lives. 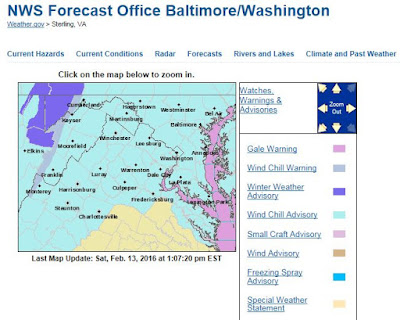 The Sterling (LWX) county warning area (CWA) advisories updated at 1:07PM February 13, 2016.
As for that freezing spray advisory, it is actually in effect on the Chesapeake Bay, but it is overwhelmed in importance by the gale warning in effect, so you don't see it in the color-coded map.
******* 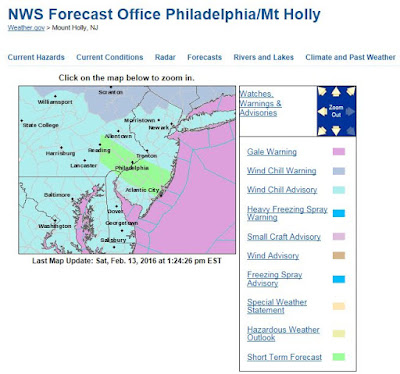 The Mount Holly/Philadelphia (PHI) county warning area (CWA) advisories updated at 1:07PM February 13, 2016.
In this case, the freezing spray advisory is in effect for the Delaware Bay, but it is also "superseded" on the map by the gale warnings in effect. The light green shaded area across a swath of south-central New Jersey is a short-term forecast for snow showers / snow squalls.
*******


Looking ahead to Monday (Washington's Birthday federal holiday), the weather is forecasted to feature a big wintry mess starting as snow Sunday night and transitioning to sleet, freezing rain, and then rain on Monday into Tuesday before ending as snow showers Tuesday night. I'll have more to say about that storm in coming entries. 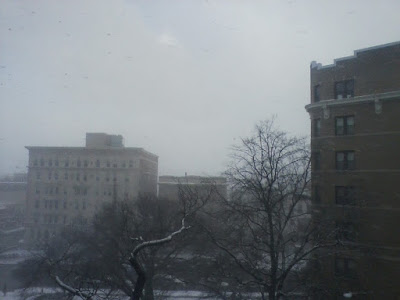 
I must get to the gym today. I was really good about the gym on Monday and OK about it on Tuesday. By Wednesday, though, I tried to go, but I just couldn't do the jog and that ruined the rest of the workout, so I came home early.
Another entry later tonight along with a possible jukebox Saturday night entry (I just don't have a good repertoire of songs to post these days).
--Regulus
Posted by Regulus at 2:17 PM