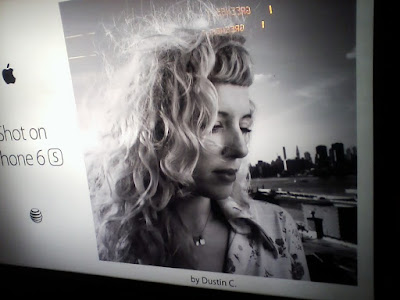 An ad for an iPhone 6 or something like that in the U Street/Cardozo Metro, Washington, D.C., 9:34AM February 12, 2016.
Actually, there is a whole ad campaign across the Metrorail system with lots of interesting pictures. I happened to quite like this picture.
*******


This is the entry that I started on Friday night but was unable to post.
I noted that there were many links to and excerpts of various pieces that I want to post, not to mention a weather update that it would take too long on a Friday night when I would like to be out.
It's Sunday afternoon now as I try to write this entry with a suitable rewrite of the Friday night draft entry. The pictures include those I took on Friday. 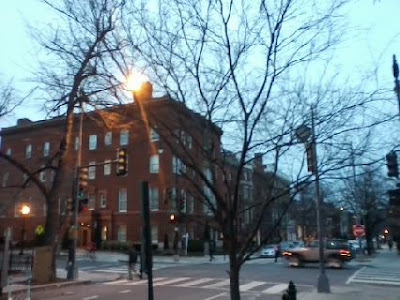 Dusk, corner of R and 18th Streets NW, Washington, D.C., 5:39PM February 12, 2016.
I had gotten a haircut at the Hair Cuttery after leaving work a bit early to go to a doctor's appointment at the MedStar facility in Friendship Heights. I seem to be doing OK although my blood pressure is variable -- sometimes normal, sometimes elevated. The doctor doesn't seem worried.
*******


One of the links I really have to post is news of the tentative DIRECT CONFIRMATION of gravitational waves by the LIGO experiment is truly astonishing and wondrous news -- to the point that I actually want to repost in their entirety both Dennis Overbye's New York Times article and Phil Plait's Bad Astronomy blog entry. 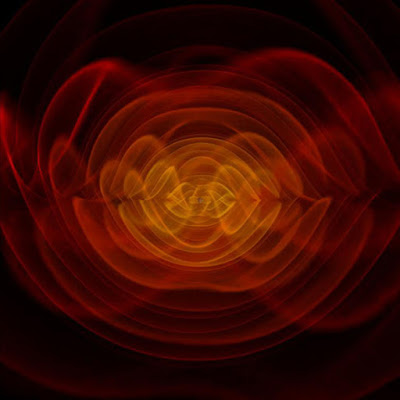 
I also mentioned that Thursday night turned into quite a show ... I went with Andrea after work to Baan Thai to the back bar where we had some dinner and drinks served to us by Tommy (the owner, who also bartends there). Then we went to Trade. 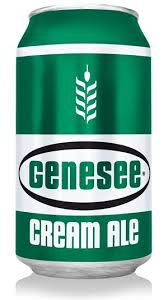 I know at some point after several large vodka sodas, Andrea and I got into an animated discussion about whether or not Genesee Cream Ale beer -- a can of which is displayed behind the bar with the other available beers -- is trashy or good. As I had a good experience with it during a little Hampton Courts - Wakefield Court building reception held in the lobby of this building (the Hampton Courts) last fall, and because "Genesee" is a name I associate with Buffalo, a city I like, for it it's in the "good" category.


To clarify, the Genesee brewery is located in western New York in Rochester.
As a result, we bought one and she took a photo of me drinking it: 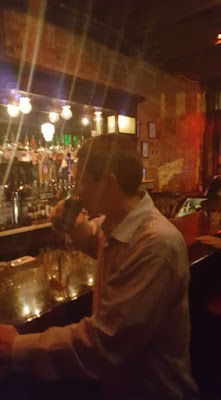 Anyway, we ended up walking to Fox & Hounds and Jamie was there -- except I have no recollection of that. (No, I was not served.) I do vaguely recall taking a taxi home and then washing a shirt and hoodie in my bathtub (unsure why I did that). That made kind of a wet, laundry detergent-heavy mess of them, so I ended doing a load of laundry on Friday evening before heading out.


It was the only way to get them back to a wearable state. 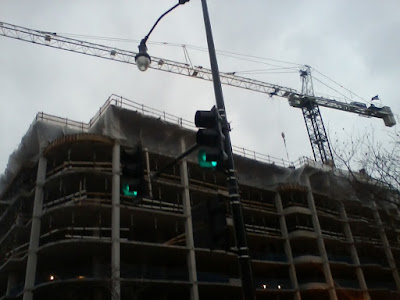 
Despite that, I was NOT crazy late Friday morning -- just a little bit -- and got through the day. Actually, I woke up out of a very odd but pleasant dream involving MH's former boyfriend, Mike V. I was visiting some spacious apartment at 14th and Rhode Island Ave NW.
Now it is true that I used to live for a brief and unhappy period (late 2003 to May 2004) in the Newport West on Rhode Island Ave near the intersection of 14th Street NW. But the apartment building was on the spot of the old Caribou Coffee place -- and where in the real world, a big, new, luxury condo is going up that I couldn't afford in a million billion years.
Anyway, in the dream, I remember asking the girl who lived there if she liked the view during the blizzard and she said she did, it was wonderful.
Then I was in a large gym -- actually, the locker room, trying to open a locker -- and suddenly MV was there and offered to be a personal trainer to me.
Then I woke up. 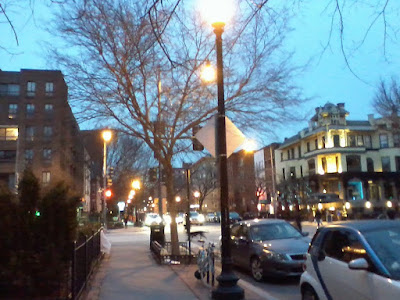 
Friday night was quite pleasant as I went to Floriana and watched on Netflix a series of episodes of The Golden Girls that Dito was showing on the bar television. I got to watch my two favorite episodes in full (with no Hallmark / TV Land butchering of the show to make room for more commercials): "Bringing Up Baby" and "Not Another Monday." Oh, and also I watched another favorite episode, "The Housekeeper." 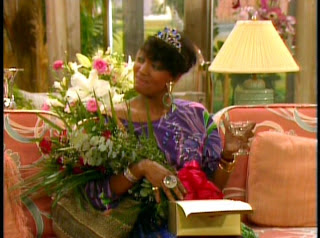 Actress Paula Kelly as Marguerite Brown in The Golden Girls episode "The Housekeeper."
*******


The best line is when she shows up at the door and introduces herself by saying, "I am Olaiya," to which Redd Foxx (as Fred Sanford) replies, "Well, it's prob'ly the water."
Of note, the actress who played Marguerite Brown -- Paula Kelly -- played on a long-ago episode of Sanford & Son. The episode is "Lamont Goes African" and she plays a Nigerian woman named Olayia. 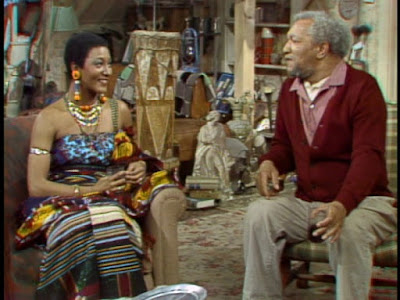 
On Saturday, I went to the gym and had a good workout. At night, I went to No. 9 and Trade before heading home. For today, I'm supposed to meet Andrea at Commissary later this afternoon.
Once spring comes and the daylight is sufficiently long, and I get a new bicycle, I will start doing my "warm season" activity of taking lengthy bicycle rides on sundry bike trails in Montgomery County and the Virginia suburbs. 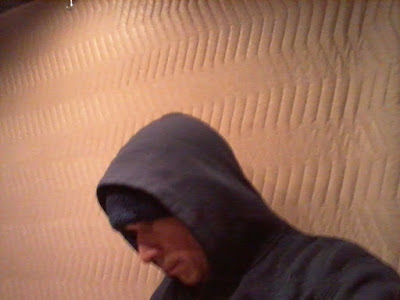 
The weather is forecasted to be a wintry mess starting as snow -- with up to 3 inches here in the District (which actually means 0.2 inches) -- followed by a turnover to sleet, freezing rain, and then rain before ending as snow showers early Wednesday. Then it is forecasted to warm up significantly by next weekend followed by another chill toward the end of February.
A low pressure system will develop across the Mississippi River Valley and track toward the mid-Atlantic. It will be accompanied by strong warm air advection, which should quickly scour out the Arctic air in place. 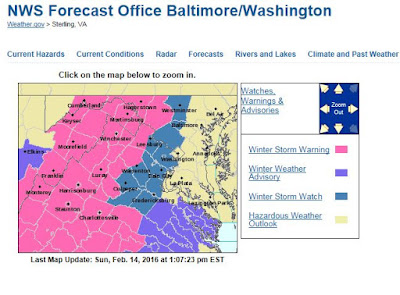 
Sterling (LWX) has issued a winter storm watch for areas just west of D.C. and there is even a winter storm warning in the Potomac highlands, Blue Ridge, and along the Allegheny Front, but here in D.C. and over to the Metro Baltimore, nothing. I suppose a winter weather advisory will be hoisted at some point. 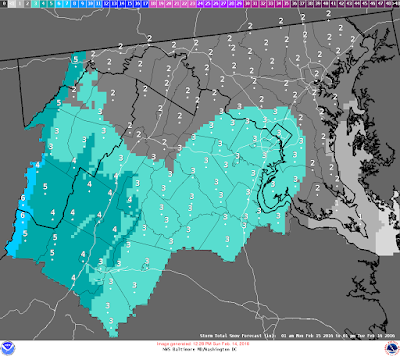 That annoying "most likely" snowfall forecast map for the Sterling (LWX) CWA for the upcoming winter weather event valid thru 1PM Feb. 16, 2016 and issued at 12:28PM this afternoon.
*******


One other item: I received by Bank of America VISA credit card. This is the first credit card I've had since the disastrous round of five defaults back in 2007 or thereabouts*. (In the previous round in 2002, I simply declared bankruptcy, though not on the student loans.) 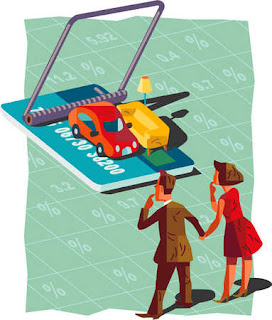 *I ultimately settled on all of them except the Macy's card, and that one just vanished but I still had to claim the written off debt as income last year -- but, in turn, that didn't matter because my student loan debt is such that I am technically insolvent. I had to explain that to the IRS after my return was flagged, but I resolved it (surprisingly quickly).


ANYWAY, this card is linked to my B-o-A checking account, so I'm not going to screw around with it. The card is unsecured but with a very low initial limit. I'll try to build it up slowly over time.
OK, that's all for now. I'm probably not going to post any blog entries tomorrow (unless the weather is such that I need to do so). My next entry might not be until late Tuesday or early Wednesday.
--Regulus
Posted by Regulus at 2:57 PM