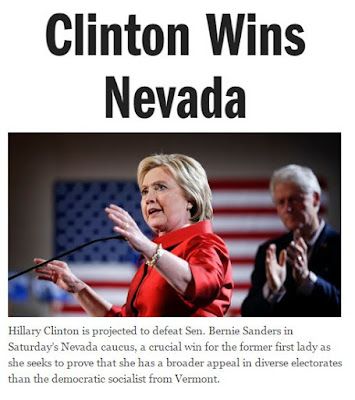 
For starters, the Nevada Democratic Caucuses are over and thankfully Hillary won. It wasn't a landslide but she beat the general presidential election unelectable Bernie Sanders 52.4% to 47.5% with just about 84% of the vote tallied. 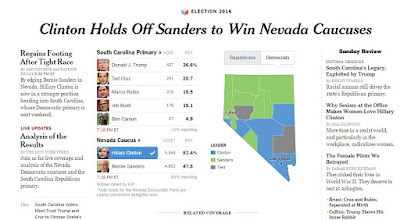 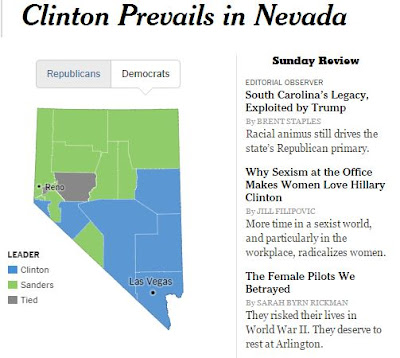 
But on the nutty Republican side in the South Carolina primary, as I write this with only about 1% of the vote in, AP has already called it for Donald Trump. 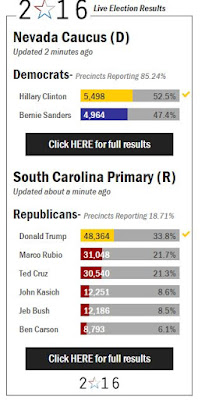 This is confusing me because recent polling from Heart-of-the-Confederacy South Carolina had shown tightening there in the ugly chaos that is this election cycle's GOP primary season. Furthermore, NBC News / MSNBC and CNN reported that their exit polling showed a three-way race between Trump, Cruz, and Rubio.

Election results as shown on TPM.com with 85.24% of the Nevada Democratic caucuses (yes, it should be plural) and 18.71% of the South Carolina Republican primary tallied.


Also, CBS News and YouGov carried out an analysis of its South Carolina polling -- re-contacting a subset of the respondents of its previous polling -- and found a significant switch away from Trump. Doing the analysis, it they still conclude that the election results will be as follows:
Donald Trump -- 36 percent
Ted Cruz -- 22 percent
Marco Rubio -- 21 percent
John Kasich -- 8 percent
Jeb Bush -- 4 percent
Other -- 7 percent


I went to the gym today and had a full, multi-part workout. For tonight, I was planning on going to Old Ebbitt Grill and then Trade. (Last night, I went to Floriana and then Fox & Hounds to meet Jamie. I also apparently went to Annie's afterwards based upon a receipt in my pocket, but I have no recollection of that.) 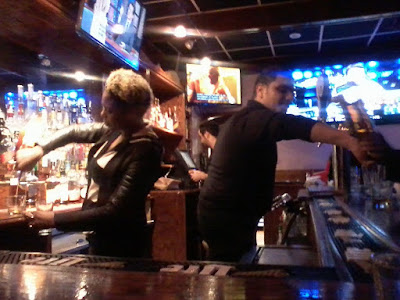 
Anyway, right now, I'm really irritated because I wanted to do my goddamn laundry -- as I typically do on Saturday nights because the fucking royally annoying Millennials who live in this building tend to NOT do their laundry on those nights.
The other large cohort -- Latin / Hispanic immigrants -- do their laundry at random times. In addition, the whole village shows up so you just take it for granted that there won't be any machines available during that time.
Right now, the frickin' laundry room is crowded with no machines available thanks to the goddamn Millennials. 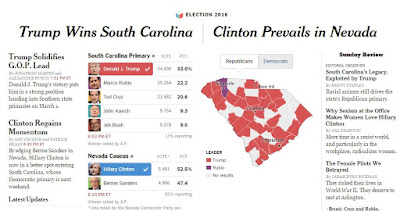 
OK, it's now 8:05PM as I write this and the South Carolina race has definitively been called for Donald Trump. A takeaway message from this is that exit polling is often useless.
In the meantime, I'm going to post my jukebox Saturday night entry.
UPDATED 9:50PM 2/20/2016


OK, this is awesome news: After wasting countless millions in other peoples' money with zero to show for it, JEB! is suspending his presidential campaign following another dreadful showing in another state.
This means AT THE VERY LEAST, we won't have ANOTHER FRICKIN' BUSH in the White House. 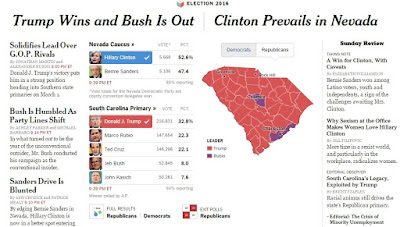 
This means Trump underperformed somewhat but he still won by 10 percentage points.
Oh, and I got my laundry done tonight. Everything is fine except the frickin' fire alarm is going off in the building and the fire trucks have just showed up. Another goddamn fire in the building. I'm heading out now.
Second Update 11:29AM 2/21/2016: The building is still here and fine. It was apparently a kitchen fire on one of the upper floors that was quickly contained. It was probably more smoke than fire.
End of Updates and of Entry.