Well, with the sudden death of Antonin Scalia, I guess it seems only appropriate to start with this piece ...
"Speak Softly Love (Love Theme from The Godfather)" by Nino Rota from The Godfather soundtrack album (1972)
There is a version with lyrics sung by Andy Williams.
*******


Because I'm not feeling very creative tonight, I'm going to repost two songs that I particularly like. The first one I featured in this Jukebox Saturday Night entry back in late Nov. 2014.
"Holding On" by Classixx from the duo's Hanging Gardens release (2013)
As I wrote in that entry:
The video accompanying the song starts out in some unidentified building with the pair seated on a sofa but it quickly opens up into a nighttime drive through foggy Los Angeles -- including driving over the Sixth Street Viaduct -- that seemingly ubiquitous feature of countless music videos -- with the Los Angeles skyline visible.
It then segues into a foggy morning, and the drive takes you rapidly on a wide range of urban thoroughfares and busy freeways near familiar landmarks such as the Hollywood sign, and along more remote stretches of highway. Near the end, you are sent quickly to LAX and abruptly find yourself on a runway and taking off sunward and through the still-hazy / foggy morning sky.
Actually, if I had to rewrite that, I would say that the video takes you on a wide-ranging driving early morning tour of the L.A. area through a variety of neighborhoods and places that ends at the airport and taking off in a jet.
*******


For the next song, it is one I posted before in a stand-alone entry but not as part of the Jukebox Saturday Night series, so here goes ...
"La La La" by Naughty Boy ft. Sam Smith from Naughty Boy's Hotel Cabana release (2013)
This is an awesome song and video.
The Wikipedia article to the song describes the music video and undergirding themes of the El Tío legend and The Wizard of Oz. The video was filmed in Bolivia in various places. It doesn't say who is the little boy.
I love these opening lyrics: 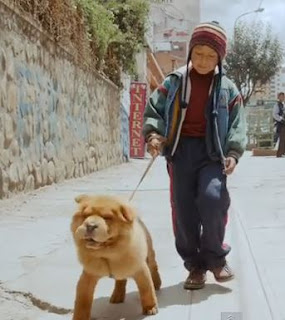 Hush, don't speak / When you spit your venom, keep it shut I hate it / When you hiss and preach / About your new messiah 'cause your theories catch fire ...

I can't find your silver lining / I don't mean to judge / But when you read your speech, it's tiring / Enough is enough!


As the briefest of updates, my previous entry noting the death of Antonin Scalia was not the entry I had intended to post, but there it is. I went to the gym today and had a good multi-part workout. For tonight, I'll probably do what I did last night -- go to Floriana and Trade. (Last night at Floriana was quite enjoyable watching uncut episodes of The Golden Girls on the TV in the downstairs grotto bar.)
I'll try to post an entry tomorrow.