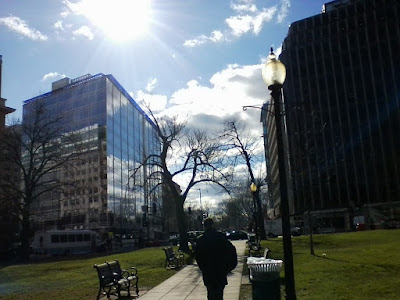 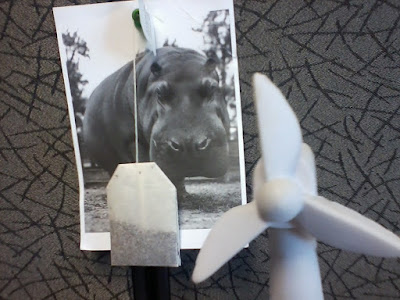 A. A picture of my betrothed, BIG Y'EYEMAH, as I prepare to have my afternoon tea.
B. A newspaper image taken at a recent Tea Party rally in some erstwhile slave-owning-intensive Southern county.
C. A picture of Mattie Wade's new boyfriend (an erstwhile fashion model).
D. A photo of Mattie Wade (getting out of the swimming pool last August at an apartment complex somewhere in the Northern Virginia exurbs).
E. The picture on my cubicle wall along with a tea bag and a little rubber wind turbine that sits on my desk.
Correct Answer: C, I mean E.
Oh, and it was lemon zinger tea.


So I was going to post a political entry tonight -- focused, as I mentioned in my previous entry, on the role of the Washington Consensus neoliberal order, and the Conservative Movement, Inc., with which it exists synergistically in creating Donald Trump -- but I think I'll refrain from that for the time being as I would like to go out and about this Friday night (without a ridiculously late start).

That being the case, I'm going to head over to Larry's Lounge briefly before going to Trade, although I think I'll get dinner at Logan Tavern, too. I kind of like that place. 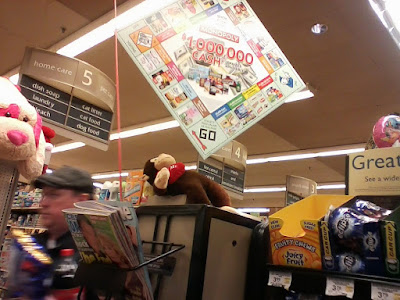 
For tomorrow, I plan to have a regular Saturday afternoon gym visit. I'll post an entry in the evening , namely, another installment of my jukebox Saturday night feature and perhaps a Saturday evening post to precede it.
I'm going to end the entry now, but before I do, I want to show this picture ... 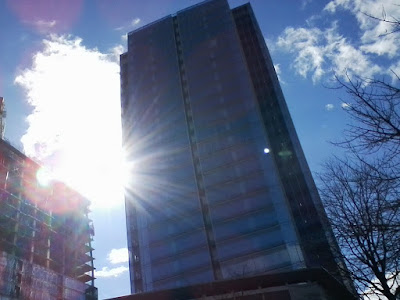 
As the caption suggests, I took this picture at 10:18AM this morning in Rosslyn (Arlington), Va., and it is of the tallest building in Rosslyn.
It is located almost directly above the Rosslyn Metro and two blocks from where I now work.
Despite the fact that I've been in this new office location since Feb. 1st, it only dawned on me this past Wednesday that this building IS in fact the 1812 North Moore skyscraper that went up in 2013 (and that, alas, remains vacant).
The building is so named because it is located at, yes, 1812 N. Moore Street. The 1812 may or may not have something to do with the war of 1812. The previous building on the site had the address 1815 (it is the 1800 block) but it fronted onto N. Fort Myer Drive.
With a 390-ft height, 1812 North Moore is the tallest skyscraper in the Metro D.C. area (and it is not in the District so the height restriction doesn't apply, so frig you).
I didn't realize it was 1812 North Moore because from street level, you cannot see its distinctive feature: the pyramidal structure atop it. From a bit farther away, it looks like this: 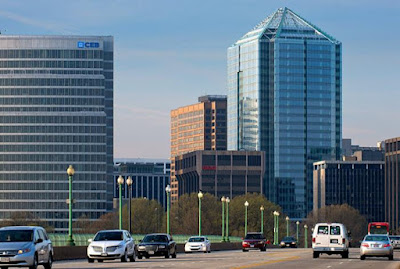 The Rosslyn skyline including 1812 N. Moore skyscraper as seen from the Key Bridge over the Potomac River in an undated (but clearly recent) photo I found online.
*******


Just as you cannot see from street-level the "wave-like" glass atrium roof atop the World Bank Building located at 18th and H Streets NW here in D.C., you cannot see the pyramidal structure of 1812 N. Moore from street-level because the structure is simply not large enough vis-à-vis the entire building.
Of note, I can see the Rosslyn skyline -- including this building -- from my apartment located about 2-1/2 miles away near 16th and U Streets NW.
I've said it before and will say it again: Rosslyn's downtown urban core is a sort of Potemkin Village in that it isn't even an actual city -- it's just part of Arlington County -- and sort of futuristic ghost town city at night (although there are condos, etc., quite nearby).
OK, that's all for now.