The Blizzard of '16 "Snowzilla" Arrives: "It is one we will remember for years, if not generations"

Sterling LWX NWS standard base mode reflectivity loop from 12:09PM to 12:52PM EST January 22, 2016.
This radar loop captured when the snow first started falling in the District of Columbia in this historic storm.
*******


It begins ... The Blizzard of '16 ... Unofficially dubbed "Snowzilla" ...
The snow started around 12:45PM and the final GFS and NAM guidance still show snowfall amounts of 20 to 30+ inches across the entire Baltimore/Washington area including right here in D.C. I posted some thoughts on the improbably snow forecast totals at National Airport in my previous entry. 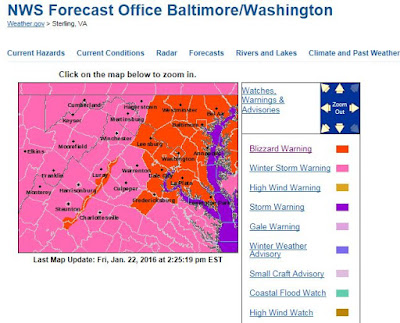 
It appears that the CWG is calling this storm Snowzilla, rather than the Weather Channel's 2015-2016 season alphabetized winter storm name Jonas.
Here are links to some of the current, informative CWG entries and some associated images.
Winter storm takes shape over the South, models continue to suggest it will become a severe blizzard by Ian Livingston 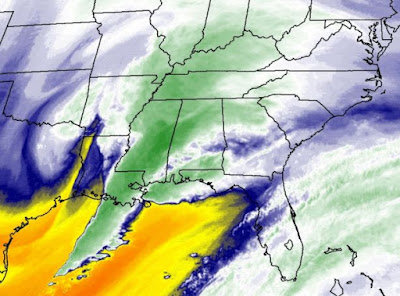 
The final forecast: Crippling blizzard bears down on Washington, D.C. by Jason Samenow
The sub-headline to this is: It is one we will remember for years if not generations. 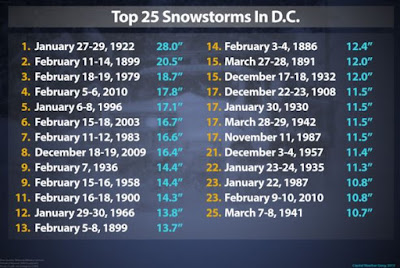 The top 25 snowstorms in Washington, D.C., in the official weather record periodtthat for snowfall stretches back to January 1888.
This includes both the pre-National Airport (pre-1945) and National Airport record. Nothing in the National Airport era even reaches 20 inches, much less 24+ inches. (My guess is that M.R. will see that it stays that way.)
*******


Why this incredible, "textbook" snowstorm is so potent by Jeff Halverson
The following two images are from that entry, which includes appropriate credit: 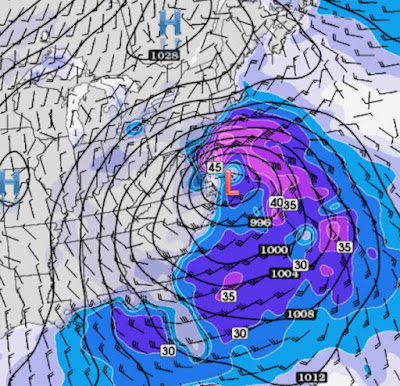 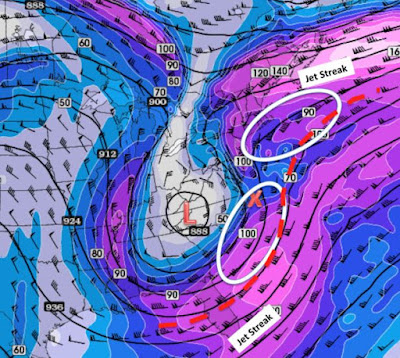 Jet stream (approx. 30,000-foot) winds associated with the storm as forecasted for 7AM January 23, 2016.
I'm unsure what the black contours and numbers represent -- they don't seem to be geopotential heights or thicknesses at that level.
*******


Below, I am reposting part of this morning's 10:04AM Sterling (LWX) area forecast discussion along with images -- snowfall forecast maps and histograms -- taken from the 6Z and 12Z GFS runs. (The NAM runs were about 5 to 10 inches lower in their snow totals and more in line with the 0Z Euro run.) Barring something extraordinary (which this whole storm seems determined to be), this will be the last entry containing any model guidance on forecasted snow totals. 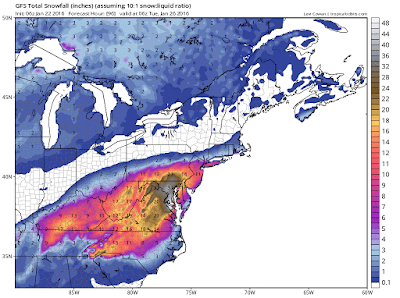 
CLOSED UPPER-LEVEL LOW HAS ALREADY DEVELOPED IN THE SOUTHERN STREAM OF THE JET ACROSS THE GULF COAST STATES. HIGH PRESSURE TO OUR NORTH IS FEEDING IN COLD AIR ACROSS OUR REGION...AND SURFACE LOW PRESSURE IS RAPIDLY DEEPENING OVER ALABAMA. SNOW HAS ALREADY MOVED INTO CENTRAL VIRGINIA WELL AHEAD OF THIS SYSTEM...AND IT WILL CONTINUE SPREAD OVERHEAD FROM SOUTHWEST TO NORTHEAST TODAY.
DESPITE THE SYSTEM BEING WELL TO OUR SOUTH...STRONG JET DYNAMICS WELL AHEAD OF THE SYSTEM...AN OVERRUNNING COMPONENT TO THE LOW- LEVEL FLOW AND DEEP MOISTURE ASSOCIATED WITH THIS SYSTEM WILL CAUSE SNOW TO ACCUMULATE QUICKLY RIGHT AFTER THE ONSET TIME. 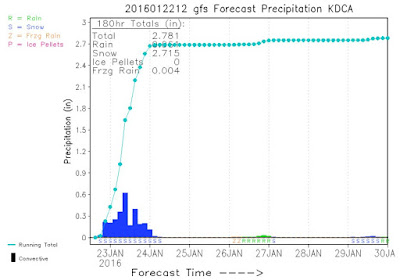 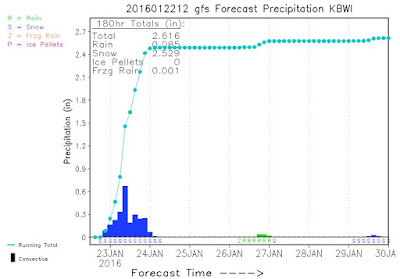 
.SHORT TERM /6 PM THIS EVENING THROUGH SATURDAY NIGHT/...
BY 00Z SATURDAY/FRIDAY EVENING THE SFC LOW WILL TRANSITION TO THE COAST AND RAPIDLY INTENSIFY. THE BAROCLINC ZONE ON THE NORTH SIDE OF THE SFC LOW WILL BECOME STRONGER TONIGHT WITH A 50-70KT EASTERLY LLJ ACROSS THE MID-ATLANTIC REGION. WINDS ARE GOING TO RAMP UP CAUSING CONDTIONS TO WORSEN OVERNIGHT... 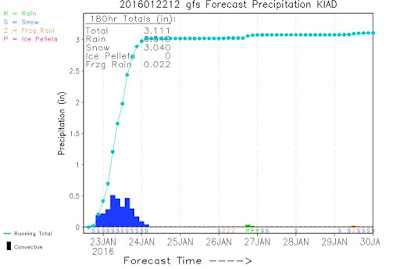 
BLOWING SNOW WILL CAUSE NEAR ZERO VISBILITIES AND DRIFTING SNOW. LAPSE RATES ARE ALSO EXPECTED TO INCREASE TONIGHT INTO SATURDAY AND THUNDERSTORMS ARE POSSIBLE MAINLY EAST OF THE BLUE RIDGE. THIS WILL CAUSE SNOWFALL RATES TO INCREASE TO 2+INCHES AN HOUR ACROSS THE REGION. 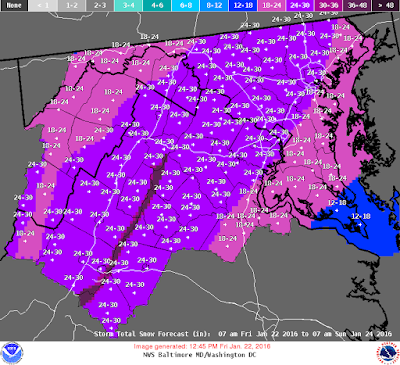 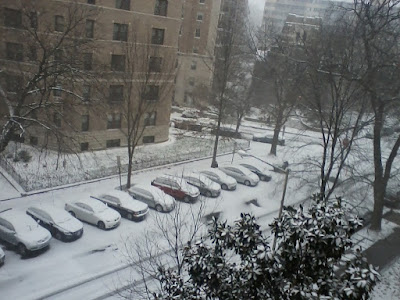 
As a brief update, I didn't get to bed until nearly 5AM and then I was up by 9AM in order to telework today (our office like most shut down). When I looked at the 6Z GFS snowfall map -- with that nonsensical 54 inch bull's eye over St. Mary's County (see snow map image above) -- I decided I better get up and do what I needed to.
Without even shaving / showering (which I have since done), I got dressed and went to the little market next to my apartment building and bought $67 worth of groceries. Except for bananas and meat, it had most things -- just the usual marked up price versus the Safeway.
I then walked to the Bank of America at Dupont Circle and took out $300 from the ATM and then doubled back to the 17th Street Safeway, which was mobbed, to buy about $30 more in groceries. 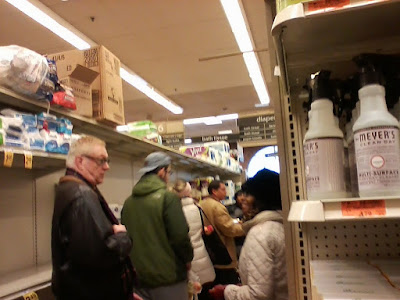 
At this point, I'm more or less stocked up for a few days.
I'm doing a load of laundry and waiting for Gary to come by to drop off his things for his planned overnighter here. I will meet him a few hours from now again and we'll go to Trade and then walk probably via Floriana to Larry's Lounge. For tomorrow, we'll take a longer walk in the snow (conditions permitting).
Actually, in the time I wrote this, Gary came by to drop off his stuff -- and that included quite a bit of food, as well, doubling my own food supply.
I'm not planning on going to the gym until Monday. In fact, I suspect the YMCA Anthony Bowen will be closed tomorrow.


OK, I guess that's all for now. I'm extremely tired -- fatigued -- after so little sleep last night. The snow is picking up in intensity outside. I'll try to post updates as the situation warrants during the course of this blizzard.
--Regulus
Posted by Regulus at 3:59 PM