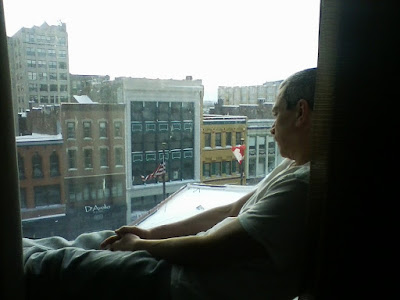 Yours truly seated in the window sill, room 413, Hyatt Regency Buffalo, Buffalo, N.Y., 9:44AM January 18, 2016.
It was a COLD morning (around 15F / wind chill around -2F) but the snow had stopped and the Sun was out. Having said that, the combination of sunlight and snow created this light in the hotel and gym room that made me look positively deathly ashen gray-white. Unless I really am that way ...
*******


OK, I wasn't going to post another entry from Buffalo, but here it is. This one should wrap up everything that I want to post. It contains photos from and a narrative for today.
I have about two hours to post a new entry while Gary does his thing at that nearby Indian Native American casino. I am betting $20 on the idea that he might double it at the Roulette table. Gary has won a than $20 on this trip there. A lot more. (To be clear, I am not going since I am a total jinx and bad luck in those situations.) 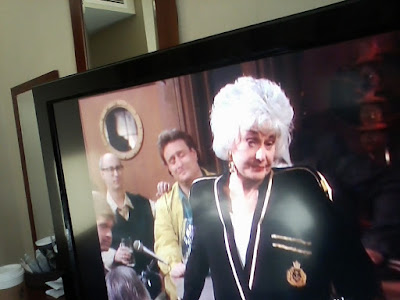 
After I finish this entry, Gary and I will try to go out one more time tonight in the Allentown section of Buffalo ("a snowy little Georgetown"). 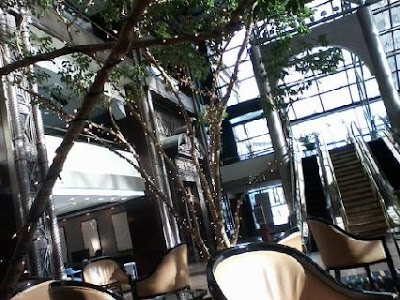 
Last night, we went back to Cathode Ray, but almost nobody was there except three Ethiopian (or Eritrean) guys, one of whom was yelling and banging on the bar and didn't come up for air, so to speak, for the entire 25 minutes we were there. Meanwhile, on the TV was the frickin' Critics' Choice Award with the volume turned up FAR TOO LOUD and featuring the usual panoply of hyper-violent or ridiculous American pop cultural TV garbage. 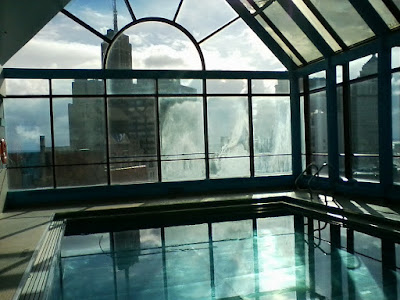 
We left and instead went to the Allen Street Hardware Café, where we had a lovely time. The music was nice and the place was cozy, inviting, and just nice. There is a weird painting on the wall of a woman staring serenely out ... She looks like nothing less than the Statue of Liberty if the Statue of Liberty were a human being. 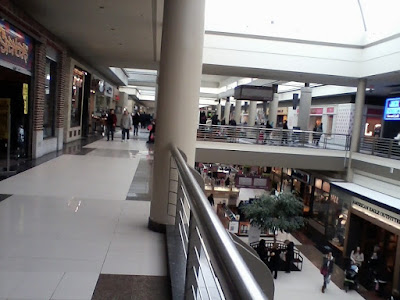 
The night was frickin' cold and gusty, although the snow had stopped except for one final burst as we got back to the Hyatt around 1230AM. 
Today, we got up around 915AM and watched two episodes of The Golden Girls. Gary went to the gym (in the hotel), but I was going to skip it as I had already gone yesterday. 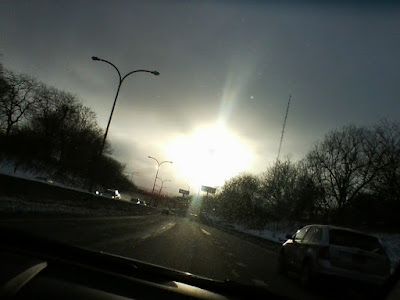 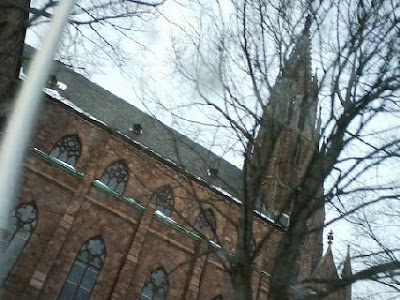 
I did a bit of weightlifting, but mostly, I just wanted to go into the pool here in the Hyatt Regency (on the 11th floor in that atrium-like place). 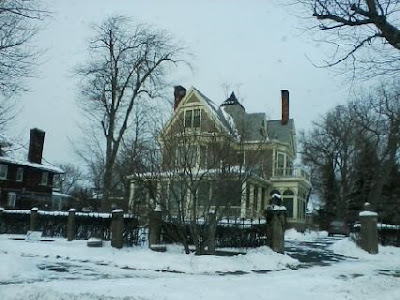 
Unlike yesterday, there was no one in that pool today, and it was absolutely wonderful. The Sun was mostly out today -- despite being bitterly cold and windy with blowing snow. (All the lake effect snow bands were either north or well south of Buffalo.) I had a nice 15 minute swim and then returned to the room, showered / shaved, got dressed, and we headed out. 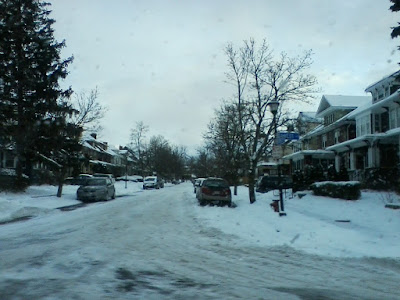 
We drove in the rental car to the Walden Galleria in Cheektowaga, and after a bit of shopping, went to the bar at the Cheesecake Factory. The mall was crowded with people -- unlike, say, the downtown area where it is almost always looks oddly abandoned. We entered through the JC Penney, just like back in the Jan. 2014 trip, and it reminded me of a Roseanne episode. It is so working class middle American here (well, D'UH ...). 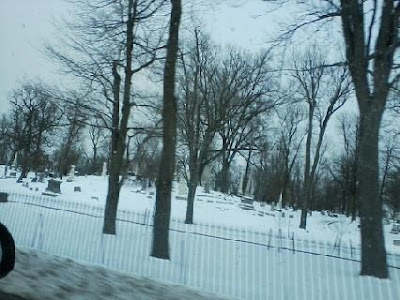 
The lunch was nice, although one of the two TVs was (silently) tuned to the Fox News Channel, and I was positioned in such a way that it was almost impossible to avoid. The level of malevolent hatred and fear mongering that spews out of that channel is such that in a just and sane world, it would be banned and shut down. 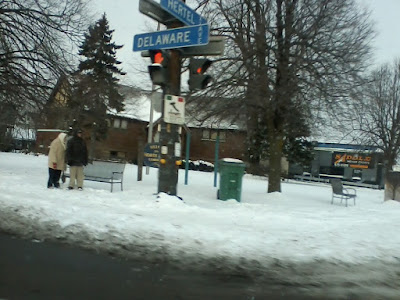 The intersection of Hertel and Delaware Avenues on the north side of Buffalo, N.Y., 4:28PM January 18, 2016.
To be clear, I think this is still in Buffalo and not in a north-side suburb. Also, that old lady in the image (in the white head scarf) was really plodding slowly, and I felt sorry for her.
*******


Of course, that's not the world we inhabit. And Fred Hyatt Hiatt's Washington Consensus is too busy seeing the "bipartisan nuance" in all that steaming on-air offal ever to criticize it. As for Fox News, reptilian hatemonger Ted Cruz. Were he to win the presidency, he might just be the thing we need to destroy the Republican Party for two generations, but to get to that point (in 2 to 4 years) would be such an ugly process that I don't want to go there. For his part, Trump would basically be a sort of a Silvio Berlusconi version of Mussolini -- all comedy and no actual action. I'd far prefer that to the malevolence of Ted Cruz. We'll see. 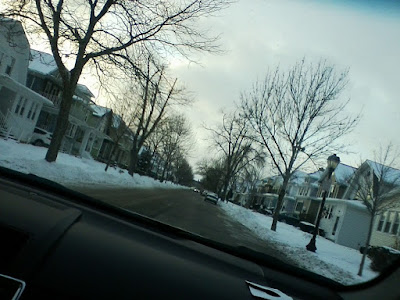 
As for Bernie, he looks like he is having a stroke all the time. And there isn't the slightest chance he could win against ANY Republican candidate.
It's either Hillary or one-party, wall-to-wall Republican rule "UFN" (until further notice). Full stop. 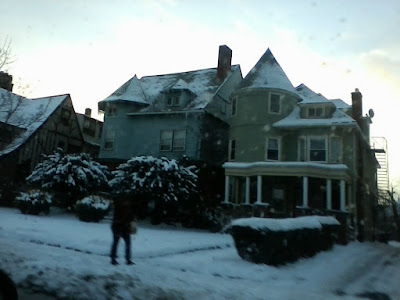 
We left the mall -- and it started to snow again (briefly). It's like flipping a switch here with the snow (on/off, on/off). We took about a 45-minute drive to the north side of Buffalo and to the suburb of Kenwood before returning to the hotel. We had a bit of a happy hour at the hotel bar -- talking to the bartenders and watching the Weather Channel (which happened to be on the TV). 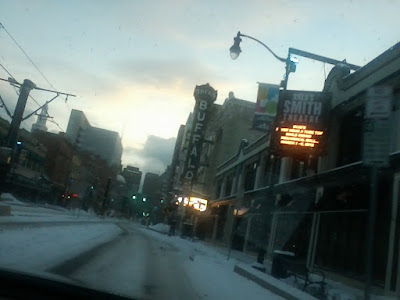 
For its part, the Weather Channel is in full-on storm warning mode for what still looks like -- per the GFS, ECMWF, and other models -- like a major snowstorm for the Metro D.C./Baltimore areas in the range of 1 to 2 feet during the Friday / Saturday timeframe, although it is likely that sleet and freezing rain would mix in for KDCA and the District proper (as almost always happens in these coastal low situations). 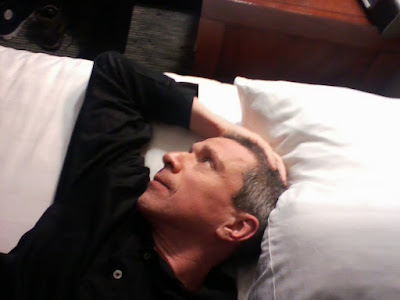 
I will have a lot more to say about this potential major winter storm event in the days ahead (unless it totally craps out).
That is all for now. For night, I think we might try to return to Hardware Café and perhaps Cathode Ray or Q. Our flight tomorrow back to D.C. is scheduled for around 1045AM, so I should be back in D.C. fairly early. However, I am not going into the office. 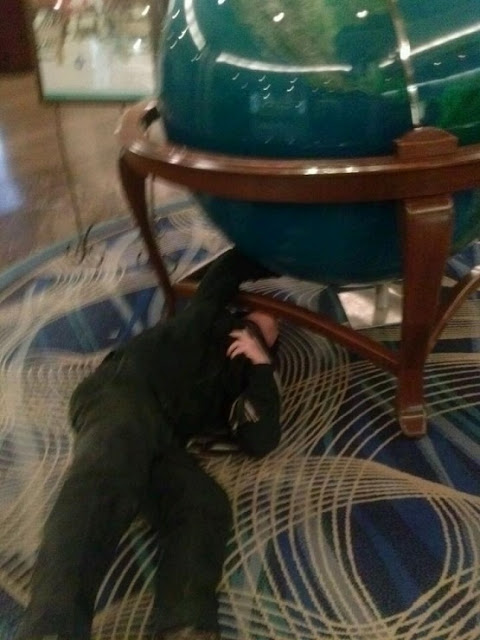 Yours truly checking for Antarctica on the big Earth globe in the Hyatt Regency Buffalo lobby, Buffalo, N.Y., around 12:30AM last night, January 18, 2016.
The velvet rope around the globe that I mentioned in my previous entry had disappeared.
*******


My next update will be either late tomorrow or on Thursday.
Peace out.