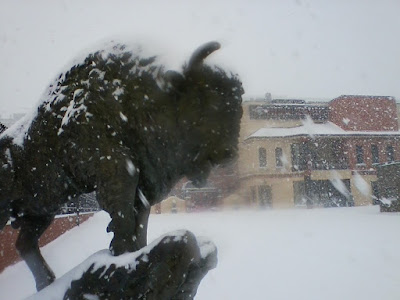 
Hi there ...
This entry is coming from the business center at the Hyatt Regency Buffalo. The business center -- consisting of two computers -- is located on the third second floor in something called the Seneca Room. I have about 43 minutes of available time, so I cannot stay here too long, esp. as Gary and I are planning on going out tonight. 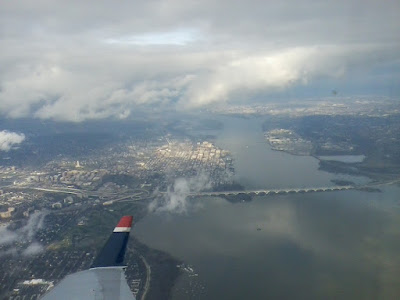 Ascending from Ronald Reagan Washington National Airport over the Potomac River looking across Alexandria and part of Washington, D.C., with the Woodrow Wilson Bridge visible below, 12:52PM January 16, 2016.
We did the downriver takeoff but flew an arc around the D.C. However, there were a lot of clouds, so the view was soon obstructed.
*******


There is an enormous young woman next to me using the other computer.
So I am here in Buffalo for this Martin Luther King holiday weekend trip with Gary for the intent and purpose to see snow, and we are getting snow, although the prolonged massive lake effect snow (LES) event really doesn't seem to have panned out, esp. for locations just south of Buffalo. 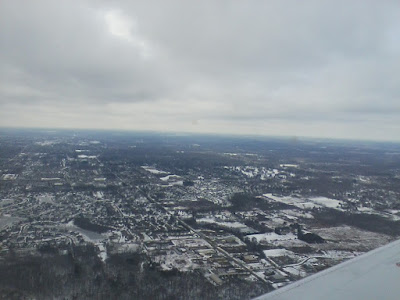 
It snowed heavily earlier today between about noon and 4PM with occasional white out conditions in Buffalo proper as a lake effect band oriented SW-to-NE set up over the immediate Buffalo airport.
Through 4PM, KBUF itself recorded 3.8 inches of snow, although I think that should rise closer to 6 inches by the end of the day. Here in downtown, about 5 to 6 inches of snow fell. 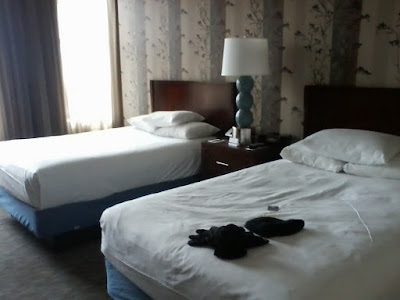 
The snow has mostly ended with flurries / snow showers but the wind has picked up as an Arctic front blasts across the region and the temperature is plunging. It is down to 19F at the 7PM hour at KBUF with a wind chill of 4F. 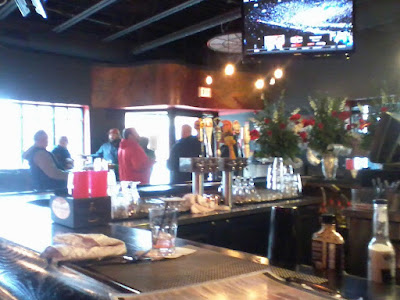 
Tomorrow is forecasted to only reach 18F with gusty westerly winds. Another LES event is forecasted tomorrow but more for areas south of Buffalo including southern Erie County and into what is called the Chautauqua Ridge. 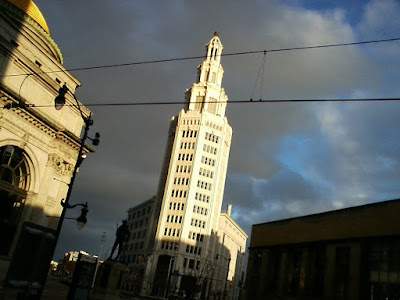 
While I want to post a little bit about current trip, I should note two weather events:
1. There was actually snowfall back in the D.C./Baltimore area today as a coastal system brushed the mid-Atlantic and created a borderline surprise snowfall event, esp. for parts of Delaware and southern New Jersey where up to 3 inches fell.
It looks as through KDCA received 0.3 inches (the first measureable snow of the season) while KBWI had a bit more (unsure of the exact amount). KIAD had less at 0.1 inches. 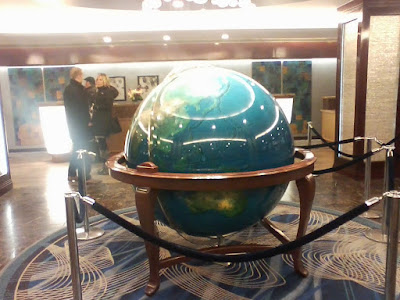 
2. Both the operational GFS and European models are strongly signaling a major East Coast storm on Friday that would be at least marginally cold enough for snow even in the D.C. area. If this forecast remains on track, I will have a lot more to say about it, esp. once I get back. It could be a major event (and, yes, the CWG has already picked up on this possibility.) 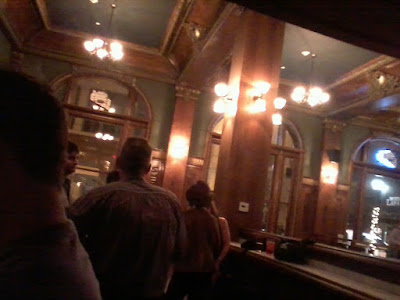 The Hotel Lafayette bar (one of two sides, namely, the older one), Buffalo, N.Y., 7:27PM January 16, 2016.
This is such an ornate and lovely hotel with much of the décor original from 1904 and (on the other side) the early 1930s. One of the bartenders explained how during a renovation, a walled-off speakeasy was found.
*******


Anyway, I am here in Buffalo.
Gary and I took the 12:24PM American Airlines flight from National Airport to Buffalo yesterday. As usual, we had to take a small jet, which required us to take one of those annoying shuttles a short distance onto the tarmac and in which you have to stand like a cattle car. Furthermore, as happened in Dec. 2014, the crew was "late" arriving at the jet and everyone had to stand in the goddamn shuttle for nearly 15 minutes. 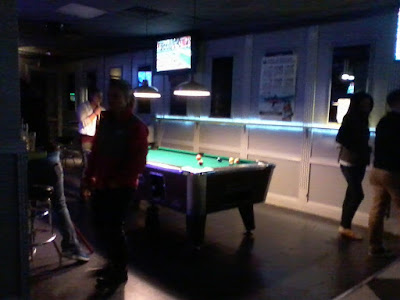 
It was a very unpleasant experience, and I was quite miffed about it, esp. given the completely lackadaisical and indifferent attitude of the ground crew (including the guy who drove our shuttle). But there is nothing you can do in a situation like that, esp. at any airport where everything is a big deal. 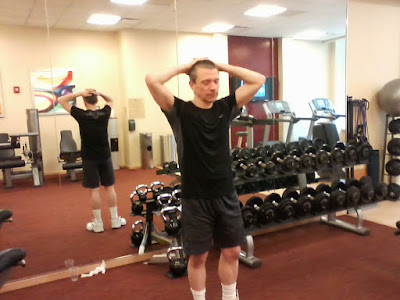 
My guess is that the crew is late precisely because they know it is such a short flight and even leaving 25 minutes late, the jet still arrived exactly on time in Buffalo. In other words, it is a built in lateness. And I'm sure there is some FAA regulation that requires passengers not only to not board a jet when the crew is not onboard (I get that part), but also to be on that shuttle, which is so needless in the case of a small airport such as National. 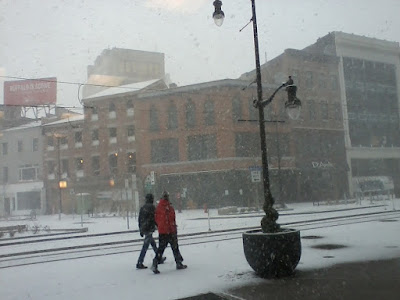 
Anyway, we arrived in Buffalo and quickly rented a car. The temperature was much lower -- by about 20F -- from Washington, D.C., and it was blustery. I put on my thermal underpants in the bathroom of the airport car rental place. 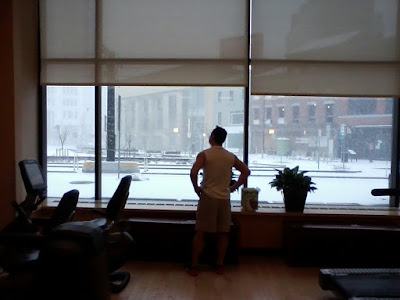 
In less than an hour from landing, we were in our hotel room at the Hyatt Regency Buffalo (rm. 413). The place was a lot more crowded than last time -- filled with lots of male teenagers and their parents for some sort of ice hockey camp. There was also a Capitals - Sabres game last night that drew a big crowd to Buffalo (including folks from D.C. on our flight). 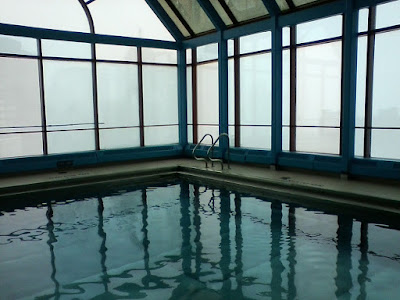 
Last night, after a detour at the hotel bar, we went to the nearby old, ornate, historic Hotel Lafayette, where we had drinks and some incredibly good beef stew dinner. Later, we went out in Allentown, driving the short distance, stopping at Cathode Ray and later at Q before heading home. 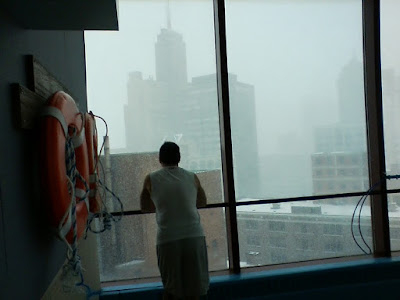 
Today, I went to the hotel gym, jogging 6.51 miles on the treadmill over 60 minutes plus 5 minute cool down. It was quite strenuous -- more so than at my gym back home, if only because of the changing "random hill" incline level I chose. 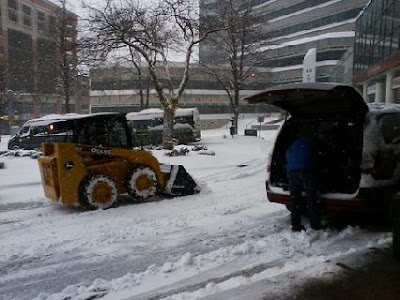 
Gary had gone to a nearby casino and won big on a single bet, doubling his money. I gave him $15 (recall I am VERY tight on money trip), and from that, I made $20 back so $35.
Gary made a lot more. What's more, he did it again tonight. 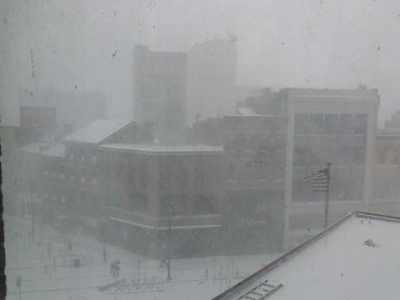 
He came to the gym and we did some weightlifting. It was then that the snow really started to pick up in intensity -- eventually briefly becoming white out conditions.
I briefly went into the 11th floor pool that is located in a strange atrium with a tremendous view of the city and (when it is clear) nearby Lake Erie (which is basically an inland sea). There were other people there including two teenage boys, a mother with her little girl, and an interracial couple with a very young girl. The little girl -- a toddler -- was happy at first but then began screaming and crying, and I had to leave. 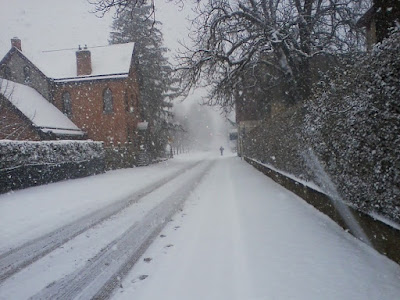 
It baffles me how frequently this happens with parents and their young children: The parents start out with some fun activity in mind and it ends in shrieks, tears, and a tantrum.
Anyway, I went back to the room, took a shower / shaved and got dressed. Gary and I headed out into the snow and walked to Allentown, where we had a nice lunch at Gabriel's Gate, and then stopped for a few drinks at The Alley Cat. The young lady who works there -- "M.J." -- was just awesome. 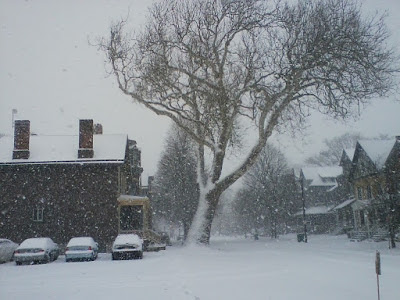 
We walked back to the hotel and I sent the 40 or so pics I took to my yahoo, and here I am in this business center writing this entry. I was able to extend my time by 30 minutes (you get two 30-minute extensions, I believe). I need to have this entry posted before 850PM. 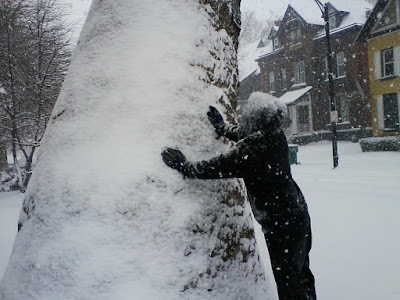 Yours truly and that enormous, ancient elm tree along Franklin Street, Buffalo, N.Y., on a snowy afternoon, 2:16PM January 17, 2016.
This tree has seen an incredible amount of snow in its 500 years or so of life. (At that age, the tree long predates the city and would have started growing when the area was just forest.)
*******


For tonight, I think we are just going back to Cathode Ray. For tomorrow, it is going to be so bitterly cold and there really isn't any noteworthy nearby LES event in the forecast, that we might just go to Cheektowaga to the Walden Galleria (rather than south of the city to Erie Shores or Angola, as we had planned). 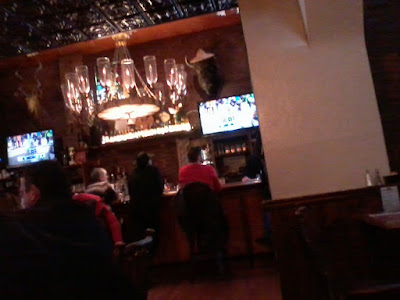 
We are supposed to return to D.C. on Tuesday afternoon.
Two more Buffalo trip pictures ... 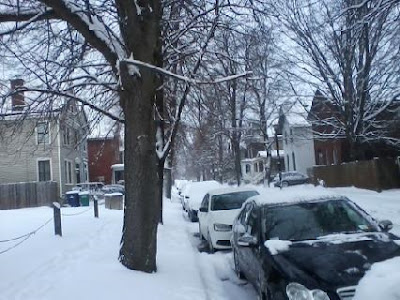 
Just as an update, I was able to log off and back on and extend my internet session enough to complete this entry (at 9:30PM). Also, the computer conveniently deletes all files left on the desktop. (There isn't an actual delete function on this computer or a recycle bin.) 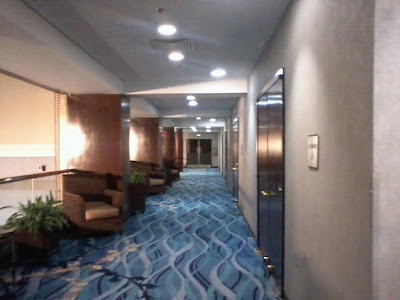 
That's all for now. My next planned update will not be at least until late Tuesday or Wednesday.
--Regulus
Posted by Regulus at 9:32 PM