Liked on The Facebook, Close Encounters of the Double-B Kind, and Jonathan Chait Good Reads -- All Interspersed with Snowy D.C. Pics 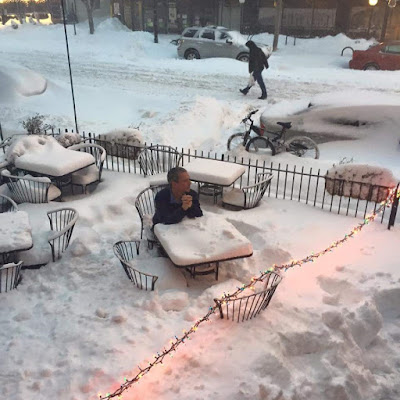 Yours truly seated outside Floriana during the blizzard, Washington, D.C., January 23, 2016.
This entry contains one noteworthy picture (see above and explained below) and a series of pictures (below) that I took yesterday walking around my Dupont gayborhood after the blizzard plus a couple others.
*******


So during the height of the blizzard -- when 20 to 30 inches fell everywhere except, of course, on Mark Richards' National Airport snowboard -- I went to Floriana with Gary. I mentioned it in that entry as well as this one.
While there, on a whimsy, I went outside on the snow-covered little patio area and sat at a snowbound table. Dito took a picture of me and posted it on his Facebook wall (is that what it's called?). As of yesterday when Jamie showed me it on his phone, that picture had 371 likes... 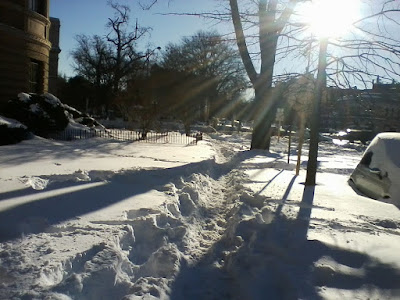 
To be clear, Dito has a lot of Facebook followers. Also, it was Andrea who sent me this photo since she has a Facebook account. I do not. (Nor do I have a Twitter nor any other social media presence, just this dumb blog). 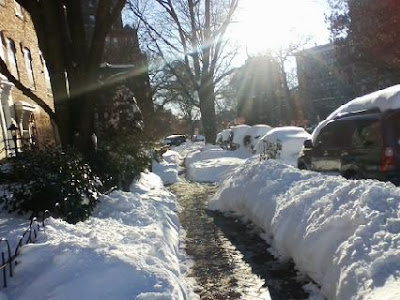 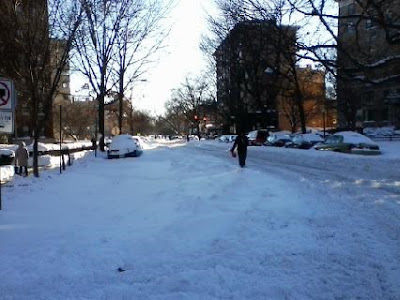 
I rarely see Mattie Wade, even though we live in the same D.C. Bubble. It's just as well. If I do, it is invariably on P Street.
I had gone to Commissary for some dinner at the bar and then to Trade for a couple drinks. At that point, I was walking the short distance from Trade -- which was mobbed last night with everyone in kind of a frenzy, perhaps cabin fever and all that -- to Tortilla Coast to meet Gary, hence the lack of appropriate outerwear, which was all in my book bag. 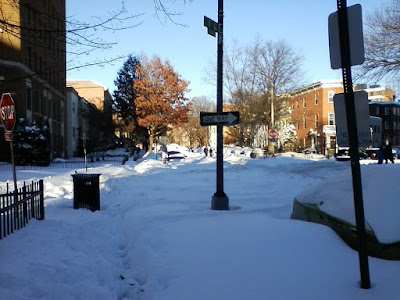 
The government is shut as is my office, so I'm teleworking. In fact most other things including my gym (YMCA Anthony Bowmen), which sucks. I hate when I can't go for more than 2 days.
If I don't go to the gym, I run the risk of becoming the size of a walrus and I'll have to undulate along the ground when on land ...
... or maybe a hippopotamus, and I'll have to sit in water all day, peering above it, one ear flapping down to get at a big horse fly buzzing about. 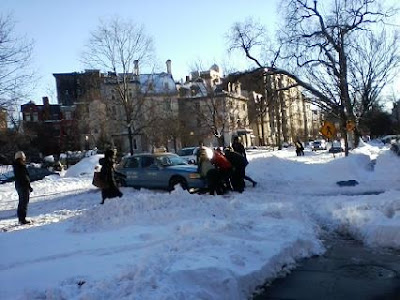 This taxi had gotten stuck in the snow at New Hampshire Ave and Swann Street and a group of young people were trying to help the driver get his vehicle unstuck; Washington, D.C., 3:54PM January 24, 2016.
One of the girls kept saying to him, "Now go home and don't drive!" That's good advice for that kind of snow-unworthy car. But he is a taxi driver and that is his livelihood.
Of note, there were lots of people driving around on the snow-blanketed side streets in sedans and other snow-unworthy vehicles and they were getting stuck everywhere. Seeing this in my neighborhood made me realize how snow-snarled the whole region must be.
******* 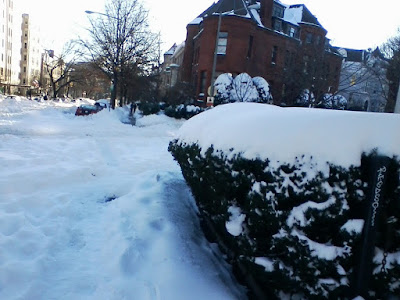 
For the remainder of this entry, I would like to post links to and excerpts of three recent excellent Jonathan Chait columns (links embedded in the headlines): 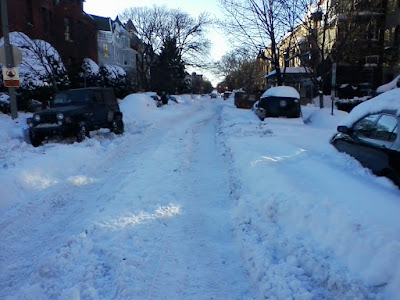 
"But throwing in with Donald Trump is an extremely bad idea for Republicans. He is wildly unpopular among the public at large, and his mix of racism, misogyny, and flamboyant ignorance is perfectly calibrated to motivate and hold together the Obama coalition of minorities, single women, and college-educated whites. And even if he could somehow win a general election, a Trump presidency would be a white-knuckle ride for his party. Trump's attitudes -- a reverence for wealth and strength, contempt for losers of all kinds, and cultural nostalgia -- may fit broadly within the GOP. But he has displayed little understanding of conservative theory, and no record of loyalty to the party. Republicans have little reason to believe Trump would expend political capital on their priorities, and less to believe he would stick to them in the face of adversity. (One analogue here might be Arnold Schwarzenegger, a cult-of-personality celebrity politician who won the governorship of California, grew deeply unpopular, and rescued his reputation by moving sharply to the center while infuriating the right.) Allowing Trump to have its nomination would saddle Republicans with the worst nominee any party has had in decades.
"What, then, could explain the GOP's bizarre capitulation? One possible reason is undue fear of Trump’s threat to run an independent candidacy if he feels mistreated by the party (a threat Republicans would be wise to ignore). But perhaps the more important factor at work is the rise of Ted Cruz, which has coincided with a sapping of the Republican Establishment’s will to oppose Trump." 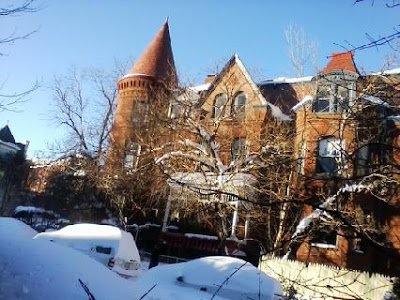 "If you look closely, you can see the spike in 1998. That was the source of so much climate-science-skeptic gasbagery -- hanging the denial of an obvious trend on the unusual outlier of a single year. "No warming since 1998" became "not much warming since 1998." Now that even the revised talking point has been left in the dust, and there has been a lot of warming even since the anomalously hot year of 1998, George Will and his fellow science skeptics will have to admit the climate scientists are right ha ha, come up with a new talking point." 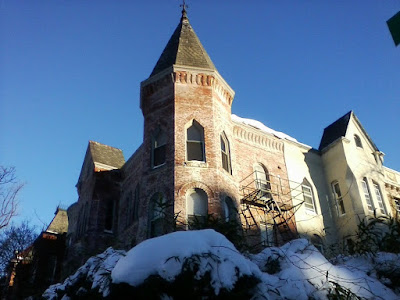 
"...Trump's ability to commandeer the presidential race is no more an accident than Palin's brief but torrid rise to the heights of right-wing idolatry. Modern American conservatism is inherently vulnerable to this kind of exploitation.
"One reason for this is that, whereas liberalism tries to apply the conclusions of science and academia to public policy, conservatism rejects those conclusions in favor of an a priori belief that more government is always wrong. One contributor, the not notably hinged commentator Glenn Beck, assails Trump for supporting the stimulus, the auto bailouts, and the bank bailouts -- three measures that most economists believe helped prevent a much deeper recession. Movement conservatism rejects the conclusions of wide swaths of economists, social scientists, the entire field of climate science ... of course it is liable to attract anti-intellectual candidates." 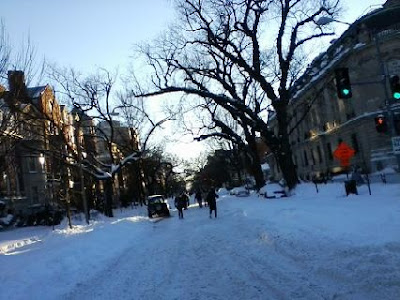 
Continued excerpt:
"A second problem is that conservative doctrine is unpopular with the public as well. The majority may often support generalized anti-government sentiment, but it does not follow those generalities through to their specific implications. During George W. Bush's first term, the proposition that Medicare ought to add prescription-drug coverage drew the support of 90 percent of the public. Conservatives did not believe this -- some of them grudgingly accepted the Bush administration's political need to cater to popular sentiment, while others castigated Bush as a traitor to conservatism for doing so." 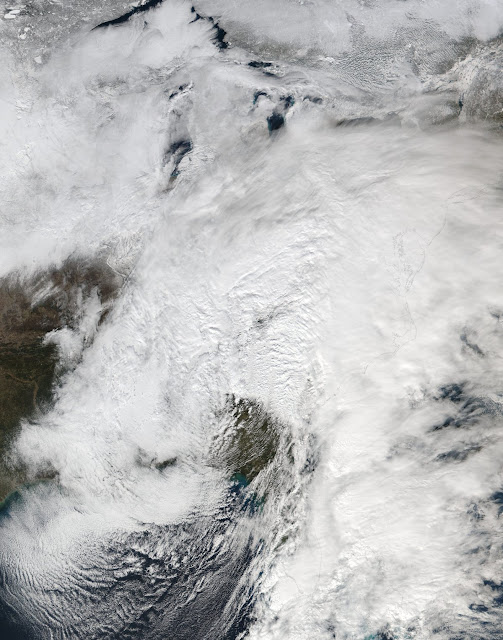 
"The habit of doublethink has embedded itself so deeply in right-wing discourse that its members hardly even notice it anymore. David McIntosh, president of the anti-tax Club for Growth, flays Trump for his advocacy of universal coverage. "About health care he has said: 'Everybody's got to be covered' and 'The government's gonna pay for it,'" writes the disgusted anti-tax lobbyist. Of course, most Republicans have also spent the last seven years promising their own vague alternative health-care plans that will help cover the uninsured. The difference is that, when Ted Cruz or Marco Rubio promise to repeal Obamacare and replace it with something terrific, conservatives can trust that they're lying.
"This is the rub with Trump. Conservatives fear him not because he is an ignorant demagogue, but because he's not their ignorant demagogue."
******* 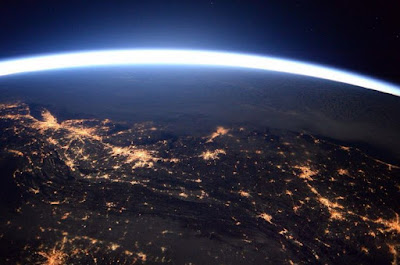 The U.S. East Coast seen from the International Space Station shortly before dawn, January 24, 2016 as the storm was pulling away out over the Atlantic Ocean.
*******


OK, and with that, I shall end this entry. My next planned update will be tomorrow night. I would prefer that things start to get back to normal.
--Regulus