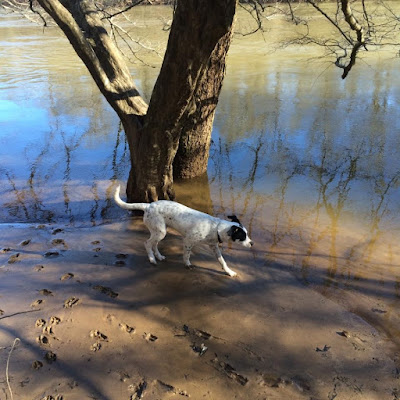 Chris sent me a picture of Finn trekking along the muddy river banks in the Island Fork Park unit of the Chattahoochee River National Recreation Area in suburban Atlanta yesterday.
I've no other pictures for this entry.


Goddammit, I just can't write anything tonight. I'm too tired.
To be clear, I had intended a full update but it is very nearly midnight at I start this entry, and I'm rather tired. I had a decent gym workout -- despite how crowded the place is with all the new members (as is to be expected in the January rush and with the closure of the National Capital YMCA).
I'll have time tomorrow early evening to post an entry -- at least the Sunday walk pictures that I've mentioned.
I'm also chagrined that I have never posted the "Wall-P and Me (and Hysterical Gee Makes Three)" vignettes that I had intended to post on my other blog.
Thus, there has no stories about BIG Y'EYEMAH and me living in our about-to-be-repossessed single-wide trailer with Little Annabelle Mae (last seen torching the for-profit school) at the broken edge of some "libertarian paradise" dystopia in the United States of Marco Rubio's Billionaire Donors or the Fearful Fundie Republic of Ted Cruz. (Donald Trump's would be more of a fascist Oz.)
The dialogue between the binary-circuited, power-and-money-fixated Wall-P corporate stooge-bot and the Hysterical One would go something like this:
Wall-P: "Eh. Eh. Dow up. Money made. Power. Client call Line 1. Staff Line 2. Eheheh."
The Hysterical One: "ROCK ON! ROCK ON! OH! OH! OH! DIDJYA HEAR!?! DIDJYA HEAR!?! AVRIL LAVIGNE IS TEAMING UP WITH USHER TO DO A LIVE REMAKE OF LITHIUM FROM EVANESCENCE'S THE OPEN DOOR RELEASE NEXT MONTH AT NISSAN PAVILION!"
Wall-P: "Dude, I hadn't. Client call. Money needs to be made. Eh. It is the highest good in existence. Eheheheh."
The opening of the series involves me trying to get Wall-P to give money to feed BIG Y'EYEMAH (and me).
Me: "Oh, Wall-P, I need to borrow just a little cash-"
Wall-P: "Dude. I gave you $50. What did you do with it??"
Me: "Oh, Wall-P, BIG Y'EYEMAH got hungry and we had to stop at the Fundamentalists' All-Fried Waffle House off the interstate."
Wall-P: "Dude, I can't afford to feed her. Besides, she's your spousal obligation, not to mention 1,000 pounds --"
Me: "Oh, Wall-P, things are a bit hard right now, and she can't help it. She has to keep up her strength. She's not really overweight, just a little chunky-"
Wall-P: "Dude, she's a sphere."
Me: "Well, maybe just a little. She's rolling towards me across the shag carpet as we speak. There, there, BIG Y'EYEMAH! Look out for all those splinters in that old rug!"
BIG Y'EYEMAH: "FOOD!"
Oh, and then we get into the Wall-P's A City Bistro that is misspelled in the ads as "A Shitty Bistro" except -- on that note -- we find out that on opening night, there is a real surprise in the special secret sauce (hint: Chinese-made particle board sawdust and city sludge slathered with some A1 steak sauce).
On opening night, just before all hell breaks loose, the Hysterical One is shrieking over and over: "MILLIONS! MILLIONS! THE SPECIAL SECRET SAUCE WILL EARN YOU MILLIONS! MILLIONS!"
Whereupon The Staff comes out and smacks him hard on both cheeks simultaneously, and he faints like one of those fainting goats, legs up in the air.
The Staff: "Now that we have time, HOW DARE YOU intentionally misspell the advertisement on the occasion of Wall-P's Grand Opening! We gave you this opportunity to redeem yourself and this is how you REPAY us??"
It ends with the discovery of what's in the Special Secret Sauce (now raining down via the sprinklers on all the friends, business associates, and other guests), Wall-P going around in circles -- circuits overheating -- as his net worth goes negative ("DOES NOT COMPUTE! DOES NOT COMPUTE!") like a Dalek out of a Doctor Who episode.
Then -- just as law enforcement is about to close the place for contract violations, not sewage (it IS a libertarian paradise, after all) -- the Hysterical One goes cartoon Tasmanian Devil like tornadic shrieking mania, crashing into the walls, masonry falling, and the whole place collapses and the last words of the story are:
WALL-P'S SHITTY BISTRO IS NO MORE!
Sorry, I ruined the ending. Oh, well.
What? You don't like the story? Perhaps you don't UNDERSTAND the ORGANICALLY CONCEIVED ARTISTIC VALUE of what I just wrote??
Well, I think I should get an A+, if not from Mattie Wade's creative writing 101 class, then from the Brothers Grimm collective. I'll say!
--Regulus
Posted by Regulus at 1:08 AM