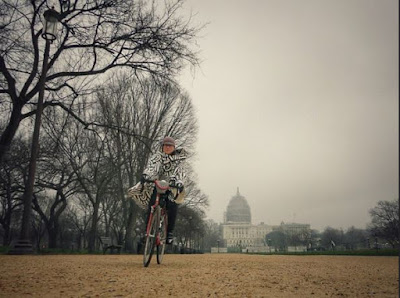 A lady rides her bicycle on the National Mall with the still-scaffolding-encased Capitol dome in the background, Washington, D.C., January 8, 2016.
This picture was taken by Flickr user gypsybug and posted in this CWG entry.
*******


This is a (genuinely) quick update in order to, if anything, replace the previous lead entry ...
It is an overcast gray (with some brightening), drizzly, cool day with temps around 46F and the dew point almost the same. Rain is forecasted tonight with possibly a thunderstorm ahead of a modified Arctic frontal blast by Tuesday, which will usher in only seasonably cold January weather, at least for a few days.
Highs on Monday around 60F will be replaced with highs around 37F on Tuesday. There might be some snow showers on Tuesday but so far we are still without any snow (0.0") at KDCA -- possibly the latest ever in the season -- and only a "trace" at both KBWI and KIAD.
As for next weekend's Buffalo trip, it doesn't look particularly promising for snow, either, but I'm sort of stuck going.
As an update ...


Last night, I went to Trade by myself, which was fine, and then -- while en route to Larry's Lounge to meet Gary, Larry, Dave J., et al. -- I saw Jamie at Fox & Hounds and I ended up spending the remainder of my night out there. We had quite a fun time. I really like the new "cave-like" interior design on the walls and ceiling.

Oh, and at one point, this young, handsome African American guy there with his friend said that I had the same relationship with Jamie that he has with his friend. I think he was talking in terms of power dynamics... 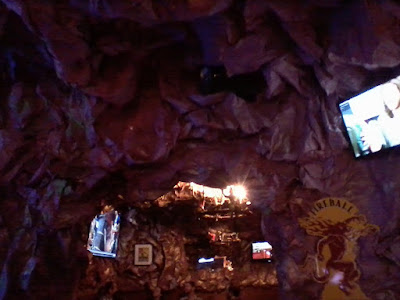 
I then did what I rarely do and stopped at McDonald's on 17th Street and had a Big Mac and small Freedom French fries. I was so damn hungry. I try to do that as little as possible.
I've slept most of the last 11 hours, although the power actually went out in my building around 845AM this morning. I was woken up because my fan turned off. Thankfully, the power went back on by 930AM and I was able to resume my slumberous dreamy sleep.
This is only the second time in the nearly 12 years I have lived in this building -- and the first time that I have been in this particular apartment -- that the power went out. We tend to lose water (usually in planned outages) but not power. 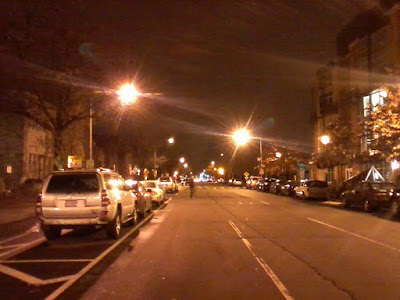 
As for Trade, I'm beginning to really like that place. I love the fact there are no TVs. What a novel concept in the year 2016. It reminds me of JRs, except fun and not dominated by gargantuan ego-sized bartender personalities with their endless, tiresome reign and a cohort of several hundred customers who are basically aging-in-place with the establishment.
Talk about riding a horse to the end. 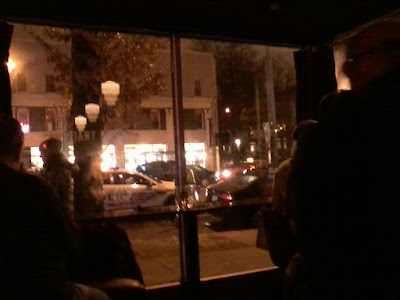 A blurry picture inside Trade looking outside onto 14th St, Washington, D.C., 10:01PM January 8, 2016.
The police were nonchalantly arresting a homeless guy while three Millennial girls yammered on the sidewalk about some Millennial topic. D.C. is such a bizarre amalgam of people all sort of pushed together into a relatively small space.
*******


Anyway, I need to get to the gym now. I intend to update the blog tonight and post a jukebox Saturday night entry.
Oh, yes, Andrea and I split a Powerball ticket. The jackpot is approaching $1 billion ($900 million, I last heard) for the first time ever. The last time we played it -- when there was a $700 million draw (the previous record high) -- we played and didn't get a single number.
I statistically fully expect the same this time.