The Thoroughly Spent Thursday -OR- Update on a Featureless, Weatherless Friday Morning 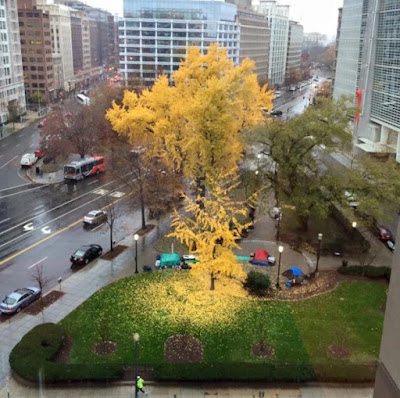 A ginkgo (maidenhair) tree in full fall "flower" with its brilliant yellow leaves carpeting the little triangular grassy area formed by the intersection of Pennsylvania Ave. and 19th and H Streets NW, Washington, D.C., Dec. 2, 2015.
Not sure if this is a male or one of the stinky, nasty female ones. Actually, there is a second tree behind it that looks like an oak of some sort that is also dropping its yellow leaves, so it is a bit confusing what you are seeing.
That is the World Bank building in the upper right. This picture was taken by Jeffrey Hatton and reposted from the CWG Facebook page to this CWG entry. Yeah, yeah, we know: Great weather until the end of time.
*******


Apologies that I didn't get a chance to post anything last night. As for last night, it totally sucked although individual happenings did not.
After leaving work late, I went to Rumors, where I had dinner and a couple drinks (a beer and wine) at the bar. That part was fine. Actually, I stopped there because a few minutes earlier, I popped into the Science Club on 19th Street just to stealth check out the unofficial CWG gathering including the regular commenters.
I came in unobtrusively, although I really don't understand the theme of the place. There is a downstairs and upstairs bar and it is very dark and kind of weird. There is a third floor as well that appears to be more of a restaurant. Old school rap music was blaring. I didn't stay but for a minute. Obviously, I didn't recognize anybody (the commenters) and I think only one CWG contributor was there. See comments to this entry.
Thereafter, I met Dave J. at Darlington House and had a series of a couple dozen text exchanges -- one with the fellow I met that night at Floriana and the other with the guy who lives in my building. I've mentioned them both before. The latter fellow just got back from 2 weeks in Colombia safe and sound.
I spent so much at Darlington House and the night was just kind of shitty. I can't spend that kind of money for nothing. Dave and I stopped at a crowded Larry's Lounge, but my mood had already gone south and a political conversation that was just the last straw so I just abruptly left and walked home.
I cancelled my doctor's appt. today because I have to finish a work assignment this afternoon. I am going to try to go to the gym this evening because I have plans tomorrow. Specifically, I'm supposed to do a West Wing tour of the White House courtesy Jake and with Andrea and some of her family. There is also a morning East Wing Christmas decoration tour, but I did that last year and a number of years ago, so there is no need to do it again.
I think I'm meeting them in between the tours while they are having lunch, possibly at Old Ebbitt Grill.
OK, that's all for now. I may not be able to update this blog until tomorrow evening.
--Regulus
Posted by Regulus at 10:46 AM