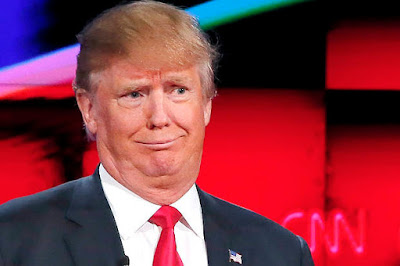 I was going to include this in another entry I intend to post shortly. However, upon second thought, I prefer to have it in a stand-alone entry. It also does not have many pictures.
As pointed out in the entry to follow, I watched the last half hour of the CNN Republican presidential primary debate last night (the fifth in the GOP series) at Floriana (well, actually, less excluding commercials). I could have probably watched more of it, especially in the setting of the Floriana grotto bar with Dito's brilliant and hilarious comments and a half dozen gay men (plus Dave) all drinking.
However, I was actually out earlier in the evening including at Pentagon City Mall and getting dinner (more on that in the following entry as well). 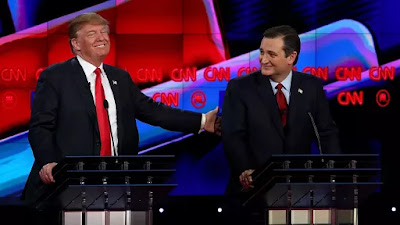 It is the case that I have been ignoring most of these GOP presidential "debates" for a reason -- preserving my own sanity. The country's political discourse and its for-profit commercial media/entertainment complex-enforced Red/Blue Manichean split is maddening and so deeply damaging.
Anyway, as for last night's debate, the general view is that nothing much changed but that Donald Trump and Sen. Ted Cruz are the front runners, Trump by a significant amount except the crazy caucus voters in places such as Iowa could give disproportionate power to Cruz. 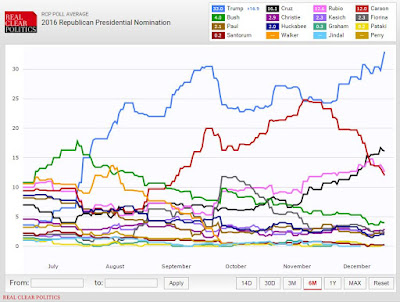 Real Clear Politics averages of the GOP presidential candidates for the past 6 months through mid-December.
*******


Putting this in the context of the apocalyptic bat-shit crazy that is today's GOP, read Josh Marshall's piece (link embedded): A Gradebook from Deep in the Heart of Crazy. 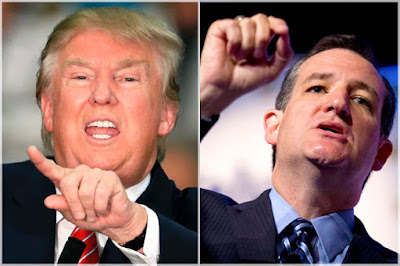 As Marshall's piece alludes to, the hysterical, apocalyptic rhetoric by ostensibly mainstream GOP presidential candidates is really in uncharted territory without precedent in the present-day era (at least for a major political party back to sundry Red Scares of the early and mid-20th Century, I would imagine).
Over the weekend, Heather Parton Digby (the blogger "Digby") had this excellent piece describing the last time one of the mainstream U.S. political parties put forth such a radical, namely, in the form of John C. Breckinridge ahead of the Civil War as Southern white slave-owning landed oligarchs were flipping out that their human chattel-based agricultural system was under threat from Northerners via the federal government. 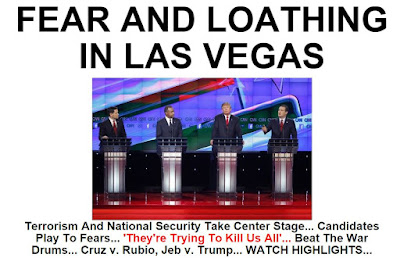 Enough has been said about this that I don't need to go too much into it except to say that it really gives you a sense of the mindset of a sizable portion of the American electorate deep inside the that epistemically closed rightwing media/entertainment complex bubble.

(True, the "left" in America has this -- mostly in the area of political correctness and abortion politics -- but it pales in comparison and is nowhere near as hermetically sealed as on the right.) 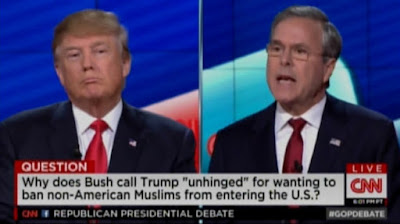 Let me just say here: No matter what happens during this election, the fact that Donald Trump continually plays rope-a-dope with the latest Bush Family offering -- the "smart" but hapless brother Jeb (er, JEB!) -- and has totally torpedoed his White House chances has been nothing less than sweet karmic justice played out on a global stage after the Dubya Disaster that started with the Bush v. Gore coup.
Dito pointed out last night that even Jeb mother, Matriarch of the Bush Dynasty, knew he shouldn't run.
*******


In any event, at this point in the contest -- and understanding that there are two months to go before the stupid Iowa caucuses kick off the actual voting process -- it is looking like Donald Trump and Ted Cruz are the contenders with no "Establishment" candidate in the picture such as Jeb Bush (the latest offering of Bush, Inc.) or Marco "Dummo" Rubio (though Rubio is certainly still in this race). To that end, here is a piece from Vox.com today (link embedded): Hey Republican Establishment, It's Time to Panic.
The article contains this amazing graph of each candidate's ad expenditures through early December for this primary cycle and his or her current standing in the polls. The waste of money so far is just astonishing and delightful to behold: 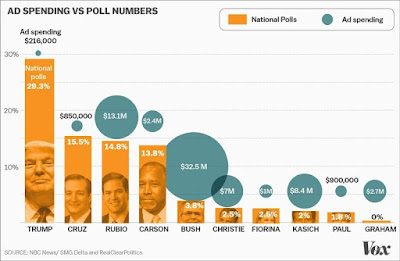 Ponder this amazing image of ad expenditures so far versus the candidates' average poll standings through early December.
Regardless, this is a nice, big "F-U" to Citizens United's Dark Money Universe.
*******


The piece links to another one that raises an important issue, namely, the electability of Ted Cruz in a general election: Ted Cruz is even less electable than Donald Trump.
Among other issues, it discusses Cruz's tax proposal for a "16% business flat tax" that is actually is a 19% federal sales tax that would function as a European-style subtraction-method value-added tax (VAT) and fall on everyone including retirees while performing the doing the usual GOP ritual of giving trillions in giveaways to the 1% and 0.1% corporate and billionaire oligarch overclasses. 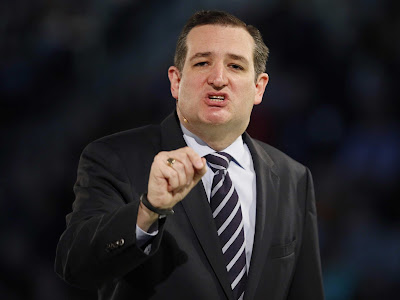 The piece concludes as follows:
"A year ago, the fundamentally unelectable nature of Cruz was well-understood, and it was universally believed that for that reason the Republican establishment would never let him win. Trump's rapid rise and astonishing resilience have called into question the establishment's ability to actually control events. But Trump has also created a gravitational distortion in how we view the candidates. Cruz's résumé -- which includes winning an actual Senate election, plus experience in jobs in the federal judiciary and state government -- looks downright conventional by comparison. 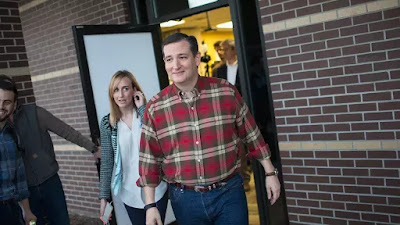 "But conventional isn't the same as electable by any means. Trump's actual policy positions are generally more moderate than Cruz's, and his support within the GOP primary electorate does not look particularly ideological. Trump as nominee would certainly be a risky (and probably disastrous) leap into the unknown. But Cruz as nominee would be a leap into something we've actually seen quite clearly before in 1964 and 1972 -- a factional candidacy by a senator from the fringe of his own party caucus who gets drubbed on Election Day."


Meanwhile, Digby made this fascinating observation her Salon piece earlier today (for my part, I didn't see that part of the debate):
"Where Rubio, Christie and Bush are typical GOP hardliners, Cruz takes a more nuanced approach while Trump is downright eccentric. It’s hard to imagine many Democrats saying what he said last night much less the leading candidate for the Republican nomination:
"We have spent $4 trillion trying to topple various people that frankly if they were there and if we could have spent that $4 trillion in the United States to fix our roads, our bridges and all of the other problems, our airports and all the other problems we have we would have been a lot better off I can tell you that right now. We have done a tremendous disservice not only to the Middle East but to humanity, the people that have been killed, the people that have been wiped away and for what? It's not like we had victory. It's a mess. The Middle East is totally destabilized, a total and complete mess. I wish we had the $4 trillion or $5 trillion." 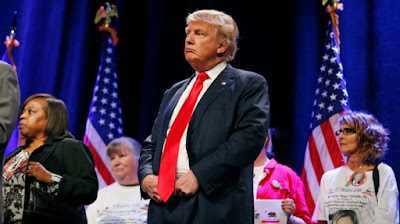 I also would like to note this Josh Marshall piece from yesterday (link embedded) on why Cruz did not take Trump's bait earlier in the week when he attacked Cruz as a "maniac" (although he withdrew that criticism last night at the debate): I Think It Could Be Trump: 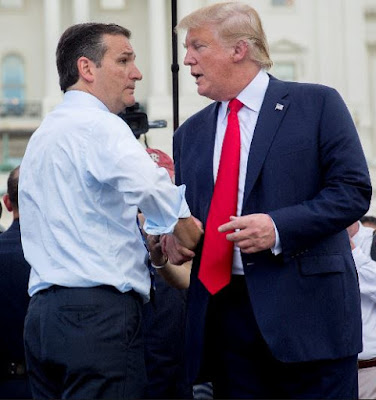 "That is one of the many things that makes the current Trump-Cruz phony war so compelling. Trump is baiting Cruz into the same smackdown he's used to eat up Bush, Walker, Fiorina and others. But Cruz won't take the bait. Like two zen masters facing off in a martial arts classic or perhaps two wizards do battle in The Lord of the Rings, we have an epic confrontation between two master who have trained for decades in the arts of assholery and bullying. But their powers equally matched, it is a stand off."
Good stuff, eh?


OK, I was going to try to post a second entry after work but I think I might hold off until tomorrow night. I'm meeting Gary and perhaps Dave at Trade. Tomorrow night is a gym night and on Friday my mom comes to visit. Today is her birthday (happy birthday, mom!). 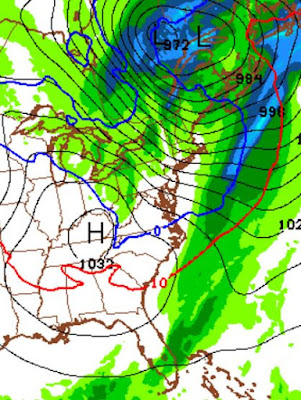 Oh, yes, there is a bit of hope for snow on Christmas -- not here in D.C. but in Buffalo, so the trip might not be off just yet.